In looking at the past of Alabama football, we can get a pretty good idea of how we are likely to repeat it.

Share All sharing options for: What Alabama Football History Can Teach Us About The End of Sabanball

"In the long run," the economist John Maynard Keynes once noted. "We are all dead." The quote is commonly recited for its wry pragmatism and seeming cynical irreverence. That interpretation widely misses the broader point Keynes was trying to make. The entire quote from A Tract on Monetary Reform published in 1923 is this:

The long run is a misleading guide to current affairs. In the long run we are all dead. Economists set themselves too easy, too useless a task if in tempestuous seasons they can only tell us that when the storm is past the ocean is flat again.

To use the common cliché, Keynes was pointing out that sometimes the view of the forest can impair the health of your trees. Every Day Should Be Saturday’s Spencer Hall evokes this point in a post today about the long-term prospects of the Alabama Crimson Tide football program. His SB Nation article The End Of Sabanball: Details, Barbarians, And Precision suggests that the overwhelming success of the Crimson Tide under Nick Saban is likely living on borrowed time. How much is the open question.

The secret of Sabanball, as Hall puts it, is not simply the highest quality recruits, opulent facilities and an almost religious devotion on the part of the Crimson Tide faithful. It is, in fact, how Saban manages to integrate them all to a single purpose that makes Alabama so formidable to face on the football field.

That replication and repetition across a long series of efforts is hard to find in college football period, but if someone wants to counter Sabanball. If you take all other things as equal, that answer is going to have to have everything Alabama has including that rarest thing of all: talent taught to perform with unvarying precision in a short period of time.

So what, he asks, is the anti virus to the Saban Syndrome? He offers a few examples of potent offenses that have seen some success against the Crimson Tide and offers Dana Holgerson’s attack as a likely candidate (an argument he states more straightforwardly here) but, eventually, the answer is just being patient.

Otherwise, failing the hiring or development of someone to counter the threat, you wait for time and tide to erode your opponent while taking your beatings with dignity. Assistants get hired away. Age dulls the ambition. Presidents meddle in otherwise functional athletic departments. Other programs hire great talent to beat the good, and transformative athletes look elsewhere for their Shaolin football training.

Sure things might seem rough right now for the hoi polloi but don’t worry, there are even greater group of unwashed set to show up at the gates soon enough. That's the long run response and, as Keynes notes, it offers little short term relief to the problem.

Interestingly, this is exactly the point where the history of Alabama football has the most to teach us about what to expect and possible ways Crimson Tide football may be able to avoid the malaise of creeping entropy. 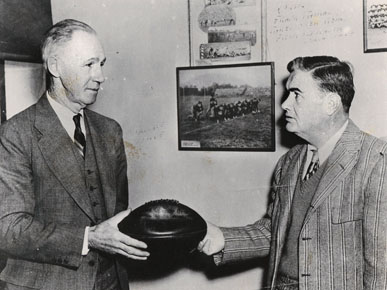 The ascension of Alabama's football fortunes began in the 1920s as the team was profoundly fortunate to secure the services of two great coaches in succession. Over the course of two decades Wallace Wade and Frank Thomas rolled up a combined record of 176-37-11 at the Capstone and earned a total of five national championships.

(The achievements of these two coaches overshadow the efforts of two very good coaches that preceded them Xen Scott and Thomas Kelly who went a combined 46-16-4.)

Following Thomas’ stepping down as head coach in 1946 the program first stumbled under Red Drew then fell flat with Ears Whitworth. The decade-long decay was acerbated by the memories of the power the program had been before. That keen push to return to the top of the sport prompted the pursuit and hiring of Paul W. Bryant.

Obviously, Bryant’s quarter century at the helm of the Crimson Tide football program was the most successful in Alabama’s history. After the Bama re-assumed its place at the forefront of college football, the hopes of an end to its dominance were rife among its foes. After a decade, it seemed those hopes were realized as Bryant’s magic seemed to have reached its end.

Bryant then rejuvenated the program with two daring moves – he switched to the Wishbone offense and embraced integration. As much as the high power offense provided a spark to Alabama’s attack, the influx of talent to the team brought by integration was the engine to the Crimson Tide’s dominance in the 1970s. The latter wasn’t necessarily a moral position framed by the civil rights era. Bryant understood that a segregated program simply denied itself a swath of the recruits foes with fewer qualms would readily welcome.

It was the two decades following Bryant’s death that marked the longest period of turmoil for the program since before World War I. Although the team didn’t regress as badly as it had in the 1950s, consistency was elusive. Every Alabama head coach that lead the team onto the football field since Bryant earned at least one 10-win season. None were able to do it twice Only Gene Stallings was able to do it more than once before Nick Saban arrived. 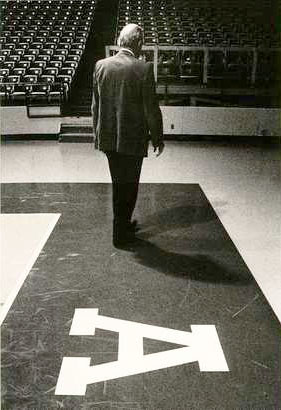 Looking back across the last century of Alabama football and surveying the eras of dominance and the varied coaches they occurred under, there are important lessons to be learned about what might be needed to forestall the slow slide from the heights of success.

The first is the importance of cooperation at the administrative levels of the athletic department and the university administration. Wallace Wade and Frank Thomas were hired by President George Hucheson Denny who saw the football team as a way of raising the profile of the university and oversaw the program with great care. It's not by accident this man's name adorns the football stadium.

There was a remarkably consistency in the management of the athletic department until Denny’s retirement in 1942. Soon after Frank Thomas stepped down as athletic director and the result was uncertainty as various interests competed for control of the program.

Thus, when Bryant was hired he specifically insisted on being both the head coach and the athletic director. The hire also meshed well with the efforts of Alabama’s president Frank Rose who had spent several years resolving the crises that engulfed the tenure of his predecessor, Oliver Carmichael.

After Bryant’s passing the football program and the athletic department encountered a turmoil very similar to that which engulfed them during the 1950s. The competing interests of the administration, the alumni and athletic department made consistency impossible. Ray Perkins left for Tampa Bay, Bill Curry departed for Kentucky and Gene Stallings retired rather than deal with AD Bob Bockrath any longer.

The key hire was most likely that of Robert Witt as Alabama’s president in 2002. His arrival brought a specific vision for the school and, most importantly, the place of the football program within it. The NCAA probation served to quiet the various factions that had battled for control and bought time for Witt and Moore to hire Nick Saban.

So where does all this leave us today? Surely Hall is correct in assuming that eventually the forces of entropy will assert their control and Alabama football will fall from its current place atop college football. It takes no gift of prophecy to predict that, just a reasonable understanding that Newton's second law of thermodynamics can be applied to history. Like the Golden Palominos once said, no matter how hard you work, something else is working harder.

That isn’t to say it will happen anytime soon. Coach Saban has always been clear that maintaining a high degree of success is far more difficult that reaching it once. His system is designed to confront complacency by focusing on the process of improvement. "Successes will continue as long as the commitment to the process of being successful remains in place," he says.

Alabama’s defensive approach will produce responses. Other teams with similar talent will continue to search for strategies that can overcome it. Eventually they will succeed. I’m not personally convinced that the Dana Holgorsen offensive model is more than a single game solution but for many teams, that will be more than enough. Just ask anyone in Starkville what happened on Nov. 1, 1980.

Still it will happen and, we hope, Coach Saban will continue to adapt to handle the challenges. He adopted a completely different defensive philosophy when he came to Tuscaloosa (the 3-4) so there’s no reason to expect he wouldn’t make a dramatic change in the future if circumstances called for it.

Eventually, though, the end will come. Nick Saban is 60 years old. It is reasonable to expect him to continue coaching for at least five more years and, if we are lucky, a full decade. The likelihood of him leaving Alabama is low because the only challenge left for a man who has resurrected as many college programs is to oversee a dynasty.

The hope we have now is that Coach Saban, Mal Moore and Robert Witt have taken an opportunity to start thinking about the next step and pondering difficult questions. How will Alabama transition from their tenure to that of their successors? What will be the process of selecting who will replace them and what will the criteria for selecting them? Is there even a wish list of possible candidates?

History has shown that putting these matters aside is the one way to guarantee they will have an unsatisfying outcome. When Coach Bryant resigned as head coach in 1982 he remained UA’s Athletic Director with the intention of helping the school transition from his leadership. His untimely death less than a month brought that plan to a tragic end. For Alabama, the long run had proven quite short indeed.

UPDATE: Year2 over at Team Speed Kills has weighed in with a response to Hall's article as well.