Despite a rocky road the last two-three weeks, the Crimson Tide basketball team is still in pretty good position to make the NCAA Tournament. As we hit the home stretch of college basketball season and the Tide chases a bid to the Big Dance, we'll provide updates at the beginning of each week showing the latest projections for the Tide's seeding and the latest look at the Tide's resume according to our usual method of breaking down Bama's results. 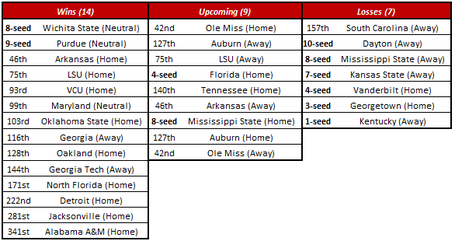 The outlook: what has changed since our last update

Despite the resume-staining loss to sub-150 South Carolina on Wednesday night, Alabama clearly is still in fine shape for a bid, positioned in the 7-10 range. This means the Tide is on the lower half of the seeding spectrum for at-large teams, but not right on the bubble either. A seeding in this range of course would mean a tough but winnable game in the opening round of the Dance, followed by a game against either a 1 or 2 seed in the second game.

The problem with the South Carolina loss of course is that it really took a shot at arguably the strongest piece of Bama's resume: the lack of bad losses. Fortunately, for now, that loss is the only one that can be considered a bad loss, as the Tide's only other losses came against projected NCAA Tournament teams. Further, five of Bama's losses were road games, and the only two losses that came at home were to projected top-4 seeds. In order to stay solidly in tournament shape and avoid the dreaded bubble, the Tide needs to avoid any more South Carolina-esque losses to sub-100 RPI teams. Specifically, that means taking care of Tennessee and Auburn at home and finding a way to steal a win at Auburn next week. Tennessee and Auburn had poor starts and have bad RPIs, but both have improved markedly since conference play began. Those will be big games.

Bama's win column is shaping up pretty nicely too, but could use another couple of wins against projected tournament teams. Unless Arkansas and/or Ole Miss turn it on down the stretch and get in position themselves, though, the Tide will only have two such opportunities before the SEC Tournament: Florida and Mississippi State, both at home. Aside from wins over tournament teams, wins over teams with very high RPIs like Arkansas and Ole Miss will really do wonders for that win column and the overall resume. That's why aside from the aforementioned home games against Florida and Mississippi State, Saturday's home game against Ole Miss is probably Bama's best chance to add a top-50 RPI trophy to that win column.

The best news of all for Bama is the relatively high RPI ranking, a big change from a year ago. The Tide's solid RPI is due in large part to having played only three teams in the bottom half the RPI, which is huge. Last year, Bama played nearly a dozen teams ranked that low (including four games against SEC foes LSU and Auburn). So, keep hoping that teams you've probably forgotten about like Oakland and North Florida continue to perform strongly within their respective conferences. Additionally, Alabama has played eight projected NCAA Tournament teams already, which is more than almost anyone in the country.

The bad news of course is that Alabama is 2-6 against those projected NCAA teams. Alabama has had some chances to get big wins in those games, but played extremely poorly in road losses to Dayton and Kansas State and a home loss to Vanderbilt, and let very close games slip away at home against Georgetown and on the road against Mississippi State and Kentucky. In particular, Bama had leads in the final minute against both Georgetown and Mississippi State.

Finally, if you do one thing as a Bama fan besides of course cheering for Alabama each and every game, cheer as hard as you can for Wichita State and Purdue the rest of the way. It's been said before but let's say it again: those two wins are pure, solid gold for this Alabama team's resume. Two wins away from home against projected NCAA Tournament teams in non-conference play are exactly the kind of things that get teams into the Big Dance and get them decent seeds. Could it be possible that an early-season Caribbean trip saves the Tide this year, one year after a similar trip cost them dearly?

Note: last week's update was mistakenly titled "41 days til Selection Sunday". That should have read "48 days". Guess we were just a little antsy to see Bama back in the Big Dance after such a heartbreaking miss last year.