With Alabama's suspension saga mostly in the rearview mirror, it's time to start focusing again on where the Tide stands in the postseason pecking order. The bottom line is that if the season ended today, every major expert out there pretty much agrees that Alabama would be in the field, albeit as one of the lower at-large seeds. However, there is also pretty broad agreement that if the Tide slips any further and doesn't close strongly, there is a real risk of missing the tournament altogether.

Because the field is so fluid and depends on how other bubble teams perform and on how many at-large spots are available (depending on which teams get automatic bids by winning conference tournaments), it is impossible to say exactly what Bama needs to do from here on out to secure a bid. What we can do however is take a closer look at the Tide's resume, and what can be done to strengthen it. Alabama will have four opportunities to get wins (and avoid losses) over the next two weeks. 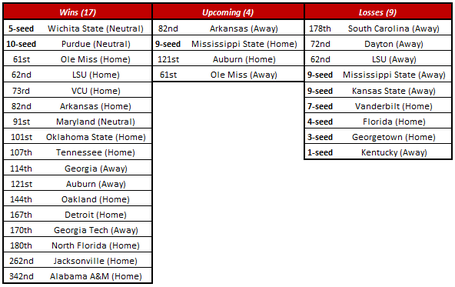