With National Signing Day and a little real life out of the way, we can get back to the task of breaking down the SEC's top running backs and seeing which ones truly performed at a high level and which one's simply looked good on the stat sheets. This time we have Mississippi State's Vick Ballard under the microscope and, despite being the #4 rusher in the conference, we definitely have our first case of boom or bust performances really skewing the stat sheet and perception of his performance.

With that in mind, here are Ballard's numbers over the course of the season.

For the sake of comparison among the SEC backs we will only be looking at their performance against conference opponents to eliminate stat skewing performances against OOC cupcakes, something that doesn't do Ballard many favors. Though his total numbers look good, when you factor out the OOC games his success rate (51% / 43%), yards per carry (6.2 / 4.7), and yards per game (84.1 / 71.5) all take pretty significant drops. Of his five most successful performances, four came against the OOC regular season slate, with only Auburn (the SEC's #11 rush defense) and Kentucky (#10) allowing him a 50% or greater performance. Even Ole Miss, who finished dead last in the SEC against the run, held him to 48% despite giving up several stat skewing big plays.

So let's look at his in conference performance: 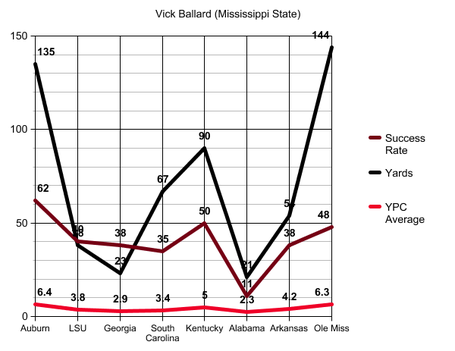 Again, against the three worst run defenses in the conference Ballard put up some reasonably strong numbers, but against everyone else he was effectively a non-factor. And even against non-conference opponents Ballard generally did pretty well, though I do want to point out one thing that perfectly sums up why this metric is useful in evaluating performances. In the Music City Bowl against Wake Forest, Ballard ran 14 times for 180 yards and two TDs. That's a jaw dropping 12.9 ypc average, but he came out with only a 43% success rate. You know why? 86% of his yardage came on three runs of 60 (TD), 22, and 72 (TD) yards. While you certainly want your backs breaking off big game changing runs like that, not every defense is going to give them an opportunity to do it once, much less three times in a game. So even though Ballard has big play capability, against the SEC less than half of his carries helped put his offense in a position to move the chains.

Overall, looking at his performance against the stronger defenses he faced, and considering Mississippi State just wasn't that good of a team this season, I have to give Ballard credit for grinding out a 1000+ yard season. He reminds me of Tauren Poole a little; he'd never be a Heisman contender, but he's at least a capable enough running back that if he played on a team with a more balanced offense that didn't almost completely rely on him he would have had a greater chance at a very special year.