Today we have another (sorta) boom or bust back in South Carolina's Marcus Lattimore. I say sorta for two reasons. First, Lattimore's season was cut short due to injury after only seven games. We're going to look at him anyway since he was well on pace to repeat/top his stellar 1197 yard performance in 2010, and who knows how the numbers would have averaged out had he played the rest of the season under the heavy load he was already carrying. Second, "boom" doesn't really describe Lattimore's running style. He's a power back built to grind out yardage, and expecting him to put up big yardage and ypc numbers on a limited amount of carries isn't very realistic. To put it another way, he's a great example of a workhorse back in a league that doesn't really use them anymore.

With that in mind, here are Lattimore's numbers over the course of the season.

For the sake of comparison among the SEC backs we will only be looking at their performance against conference opponents to eliminate stat skewing performances against OOC cupcakes. Lattimore is an interesting case. Though his total numbers look pretty impressive, when you factor out the OOC games his success rate (56% / 48%), yards per carry (5.0 / 3.9), and yards per game (116.9 / 92.0) all take pretty significant drops. It's no surprise that two of his best performances (and two of his three most "successful" perfomances) came against the only two OOC teams he faced, noted defensive powerhouses East Carolina (#81 in the nation against the run) and Navy (#92). His 358 yards in those two games accounted for 44% of his total rushing yardage, accounting for the big drop in ypc average when only looking at the SEC. So let's look at his in conference performance: 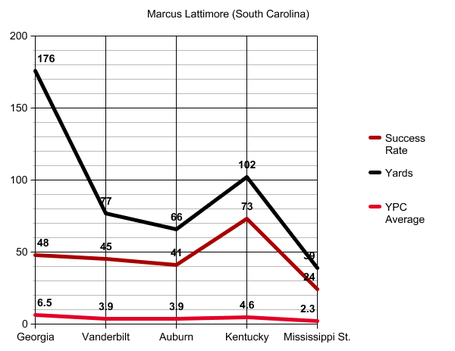 Other than the big bump in both yardage and success against Kentucky (87th in the nation against the run), the way the success rate and yardage lines mostly mirror each other is a pretty good visual view of Lattimore, i.e. what you see is what you get with the stat line. I do want to talk about the Georgia game, though, and kind of point to it as the model game you would really want from a back like Lattimore. His 27 carries in that game were his second highest carry load of the season, with a very solid 176 yards (6.5 ypc) to show for it in a 45-42 shootout win for the Gamecocks. Lattimore either moved the chains or helped put the offense in a good position to do so 48% of the time (which is a good number) while also breaking off four rushes of 10+ yards (two of which were 20+). That's pretty much the ideal performance for a true power back in a high scoring game.

Overall, Lattimore's numbers are pretty much on target with what you would expect from a back of his skill set. He's not typically going to explode in any given game, but roughly half the touches he gets end up well for the offense and he does have enough big play capability to be a real every down back. It's a shame his season was cut short and that the portion of the season he did play in was mostly defined by the erratic play of Stephen Garcia. If he returns to form after his injury he'll once again be one of the best, if not the most spectacular, backs in the SEC in 2012.