The Crimson Tide basketball team still has a lot of work to do, with a tough stretch of games coming up beginning with a road trip to LSU on Saturday night. The Tide isn't a lock for an NCAA Tournament bid, but is in fairly solid shape.

After Bama's blowout win on Tuesday night at Auburn, ESPN's Joe Lunardi ranked Alabama 28th in his "S-Curve" seeding order, the order he would expect teams to be seeded if the season ended yesterday. 28th overall equates to a 7-seed in the NCAA Tournament, and considering that around the top 48 teams receive at-large bids, the Tide actually does have some room for error down the stretch in terms of securing a bid should more setbacks occur. On the more optimistic side, the Tide is also within striking distance of moving up to the 5-6-seed range should Bama close out the regular season on a hot streak.


Latest look at the resume 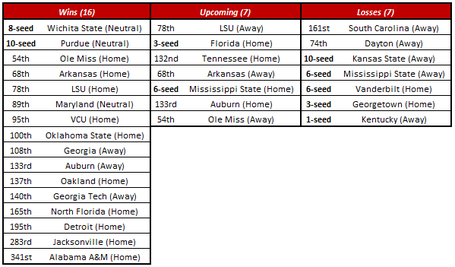