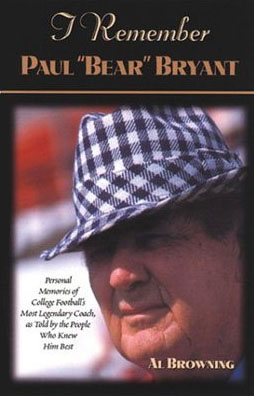 Paul W. Byrant’s stature over Alabama football presents a difficult problem for an author: how do you get close enough to glean a true understanding but stay far enough away to avoid the coaches considerable aura of influence?

The sheer passage of time has resolved this dilemma by whittling down the number of individuals who had immediate contact with the coach. In this respect we are lucky the late Al Browning penned his tome I Remember Paul "Bear" Bryant before his death in 2002.

Browning covered Alabama football as the Tuscaloosa News’ Sports Editor in the late 1970s but left to become Bryant’s personal assistant in the early 1980s. When Bryant died Browning served as the family media liaison. He later went on to cover Tennessee football at the Knoxville News Sentinel.

Browning, who died of cancer at the age of 52, penned several books on Alabama football including the game-by-game recounts of the Third Saturday in October rivalry as well as the Crimson Tide’s bowl contests.

I Remember Paul "Bear" Bryant is a collection of recollections about Bryant that Browning collected through the years. The bulk of these seem to be from the author’s own stash of interviews although it’s sometimes difficult to determine the exact provenance of a few. The narrative is put together in a rough bibliographical arrangement that gives a structure to the work that helps its necessarily choppy approach.

The bulk of the book takes the reader across a lot of well traveled ground but Browning’s familiarity with not just Bryant’s story but the telling of it was certainly a strength in the selection of the material. There are some key recollections to be found here and more than a few unexpected revelations.

One of these is a discussion with Bobby Dodd about the reason Georgia Tech left the SEC in 1963. The former Yellow Jackets coach decisively refutes the notion that academic standards, scholarship limits or the infamous Darwin Holt-Chick Graning incident had prompted the decision.

"It was scheduling and the fact we had trouble beating Alabama," he said.

By facing stout Alabama and Georgia teams late in the season, Dodd explained, Georgia Tech would often see successful seasons evaporate in close contests. The Yellow Jackets then would be passed over for lucrative bowl invitations in favor of their rivals.

So we had to do something. It might not have been the wisest decision in the world, but we decided we should become and independent and leave the SEC. It wasn’t bad blood that lead to that. It was economics. It wasn’t Paul Bryant and Bobby Dodd fighting. It was what appeared best for Georgia Tech at the time.

One fascinating aspect of I Remember Paul "Bear" Bryant is the wealth of details of how Bryant organized the program to function at such high levels for so long. There are revealing accounts of how practices were arranged and pre-game preparations that often get lost in the recounting of the more exciting moments. As always, Bryant’s attention to the finest detail to find an edge is astonishing.

Browning also adds a number of very interesting anecdotes such as how Alabama pioneered the tear-away jersey during Bryant’s tenure and how the coach helped launched the collegiate licensing business. There are also a ton of funny stories, a few of which you might not have ever heard before. The tale of keeping Furman Bisher waiting an entire day for an interview was pretty enjoyable as well.

Bryant preparing for the 1982 Liberty Bowl.
Photo The Commercial Appeal

One of the most revealing aspects of I Remember Paul "Bear" Bryant is Browning’s recollection of Bryant’s final season an the physical toll it took on him. For many the coach’s death so soon after the conclusion of the season seemed a shock but for those who saw Bryant’s physical condition it was much less so. It’s likely this insight into the period was aided by Browning’s proximity to Bryant during that final year.

One of the best parts of the book is the prologue which is really Browning’s own memoir of the coach. It’s a very personal and honest piece that gives the most insightful window into Bryant’s personality by showing the dynamic of the their relationship. It packs an honesty and immediacy most recollections of the legendary coach tend to lack.

In the end, I Remember Paul "Bear" Bryant fits into a niche of in-their-own-words-style books about Bryant and Alabama football but leads the pack simply through Browning’s intimate familiarity of the subject matter. You are going to recognize a lot of the stories simply because so many others have used this book as source material. It’s definitely worth the effort to go back and read the original.