The RBR Reading Room: The Titan of Tuscaloosa

Share All sharing options for: The RBR Reading Room: The Titan of Tuscaloosa 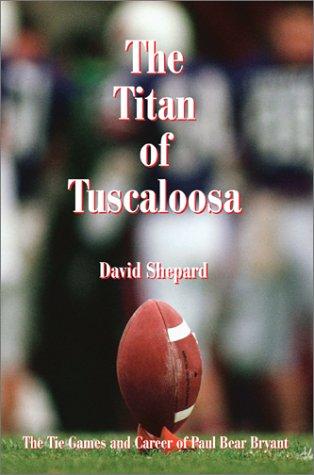 Paul W. Bryant once famously described tie games as being "like kissing your sister." Which couldn't possibly be an accurate statement since it doesn't quite capture the degree he despised tie outcomes. Bryant played in or coached college football for a half century and over a span of 536 total games there were just 26 ties, barely 5 percent.

Those games are the subject of David Shepard's 2002 book The Titan of Tuscaloosa: The Tie Games and Career of Paul Bear Bryant. While most accounts of the legendary coach's career focus on key matchups and standout games, the ties offer a peek into the oft-overlooked regular season contests that made up the bulk of his impressive record.

Shepard gives an account of each game and describes a coaching "lesson" each offers. He then provides a number of extremely interesting statistics about both Bryant's career as well as Alabama football in general.

First off, this is a self-published book so expecting professional quality copy editing is unrealistic. There are a considerable number of typographical errors that are pretty much par for the course with this type of work. That said, there are a few substantive problems with the book.

There is a lack of citations or references making it impossible to evaluate the details of the narratives. In many places it's difficult to tell if Shepard is simply reproducing newspaper accounts of the games or penning a narrative from his own research. It makes it difficult to tell how reliable his information is. That's a shame since there are some extremely interesting details contained in this effort that are begging for further examination.

The timing of Bryant's career at Union College being a perfect example. Usually this episode is described as a temporary detour on his path to being an assistant at Alabama. Shepard says Bryant was actually hired onto the staff and planning to move to Jackson, Tennessee when he was called back to UA. The details in The Titan of Tuscaloosa leave the reader begging for more.

The statistics at the end of the book are what are really fascinating. They include numbers you'd expect -- a year-by-year tally of games that made up Bryant's career -- and a few you don't -- the first ballot votes of the 1968 Democratic National convention.

One fascinating entry is the "daisy chain" national champion where Shepard looks at college football's overall title holder if it were determined like boxing -- the team that beats the champion then becomes the champion. There's a website that tracks this as well, The College Football Belt, but Shepard traces the tally back to the Rutgers vs Princeton game in 1896.

Still, the stated scope of the book means it overlooks a group of games that seem to more clearly define Coach Bryant's coaching philosophy -- those where he sacrificed the tie to go for the win. No single game in Bryant's career exemplified this more than the 1962 game against Georgia Tech.

When Alabama scored in the fourth quarter of the tightly-fought contest, Bryant ordered his team to go for the two-point conversion and the lead. It failed and the Yellow Jackets defense denied the Crimson Tide one last scoring chance as time expired. The one-point loss cost the defending national champions any chance at repeating or even claiming the conference crown.

"There was no question; we had to go for the two points," Bryant said after the game. "It was my call and I'll take the blame, but when you're number one in the country you don't play for the tie."