Share All sharing options for: The RBR Reading Room | Champions Through Christ 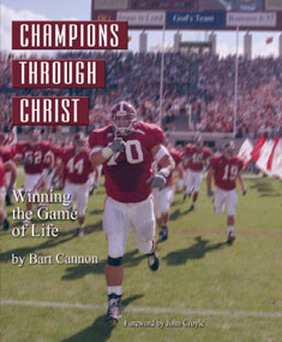 For this week's edition we're featuring something a little out of our typical purview with Bart Cannon's Champions Through Christ: Winning the Game of Life. Cannon's work is by no means the usual biographical work that we have featured here in the past, but is instead an entry into the Christian self help/motivational genre with a heavy emphasis on Alabama football anecdotes to serve as illustrations. To be blunt, it's exactly what you would expect from such a work and at barely 100 pages it's a very quick read, though one that isn't entirely unpleasant. The anecdotes and quotes from former players and coaches do just enough to keep it interesting for the die hard Bama fan, though it's intended audience is certainly limited in scope. For any Bama fans who enjoys reading self help and motivational works with a Christian emphasis, brother this one is for you. For everyone else, well, you were warned.

All that being said, while reading it my mind did wander to the role religion does play in the mind of some college athletes. Tim Tebow is the most obvious example of a football player who wears his faith on his sleeve, but there have been many great players over the years who have credited their success on and off the field to their faith. At Alabama alone Jay Barker immediately springs to mind, but on our current roster both Barrett and Harrison Jones have drawn tremendous praise for their missionary work in Haiti. Kleph penned an excellent post last October chronicling the life of Neb Hayden, a seldom remembered quarterback that left a graduate assistant position on Coach Bryant's staff to work in youth ministry. And of course anyone who follows enough football players on Twitter will eventually have at least the New Testament tweeted to them in one form or another. But what does this all have to do with football? To quote Coach Bryant, "there are a lot of lessons in football that are very difficult to teach in the home, in the church, or in the classroom. They're easy to teach on the football field." His view of football as a microcosm of life is perfectly summed up in those few words, where the adversity, struggles, and triumphs of football Saturdays can instill the mental toughness to face any real world situation with the same character and determination forged in all those countless hours in the weight room and on the field.

We Alabama fans love to draw comparisons between Paul Bryant and Nick Saban, perhaps a little too often, but there is no denying that both coaches molded their teams around players who are not only talented, but physically and mentally conditioned to an extraordinary degree. From Bryant's infamous "gym class" to the modern day Fourth Quarter Program, both men expect(ed) their players to push themselves to their absolute limits on a regular basis in the weight room and on the practice field so that no matter what happens come Saturday, they'll still have an advantage over the other guy. Former linebacker Corey Reamer probably put it best when describing Scott Cochran's S&C program:

"You stay bought into it when you see your opponent sucking air and physically failing and you're still fit and ready and you know you own his ass. You know Coach Cochran was right all along and you don't ever want to be that man."

Player's reasons for putting themselves through such torturous work outs and the physical, mental, and emotional toll that comes with playing football at the highest levels vary, from the prospect of fame and fortune in the NFL, to a possible career in coaching, or just simply to get girls. And then there are those who excel on the field because their faith simply won't allow them to not, instead instilling a sense that they must honor that faith in all areas of their life, from day to day interactions with others, to working with charities and missionary organizations, to being the best offensive lineman they can possibly be, and this book did offer some insight into that rationale. Whether you agree or disagree with Christianity, there is no denying that it's teaching and motivation has played a prominent role in driving many top players in their careers, and Cannon's work at the very least builds on that symbiotic relationship to illustrate how those principles can be applied to anyone's life, not just a football star.