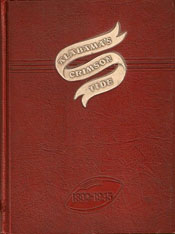 Edson was a Birmingham attorney who graduated from the University of Alabama in 1917 and, like many alumni over the years, retained a strong interest in the football team after he left Tuscaloosa. Eventually he decided to put all the information he had amassed down in book form. He spent five years researching the subject -- drawing on newspaper records, team records and personal scrapbooks -- before writing out the entire 277-page volume in longhand.

And thank goodness he did. Alabama's Crimson Tide lists the outcome of every game played by the team from its first contest in 1892 up to the 1946 victory in the Rose Bowl. While much of the scholarship concerning the Crimson Tide has focused on the Bear Bryant years and after, this book provides a crucial account of the program's earliest era we are lucky to have at our disposal. Yet, as incredible a volume as this is, make no mistake, it isn't high literature.

Edson's book provides accounts of the games tend to be straightforward descriptions; who played, the main flow of the action and the outcomes. The book does include various statistics but they are offered within the narrative and are not consistent over the whole of the work. It also includes the photo of every team with the exception of the 1893 squad (which, Edson believed, no photo was ever taken).

While Alabama's Crimson Tide may be an essential piece of Alabama football history you're not likely to ever hold a copy of the leather-bound tome in your hands. Since it was printed during World War II, the book only had a limited printing run due to wartime paper shortages. Thus it is extremely difficult to find today. Copies of the hallowed gridiron grimoire that appear on internet auction sites from time to time command astronomical prices (a recent seller was asking more than $1,000 for a copy inscribed by a former player).

The good news is that you can still read almost all of the contents of Alabama's Crimson Tide online. The bulk of the book is available on the The University of Alabama athletics website. The recaps of the 1892 through 1945 seasons on the football archives page are PDF images of the book's individual chapters.

Aside from its obvious value as a research tool, Alabama's Crimson Tide is an invaluable resource for understanding the history of university's football program on its own terms. We often think of the history of college football as a uniform and agreed upon narrative and forget that, at the time, the events and controversies that surrounded the sport were every bit as contentious and convoluted as those we see today. 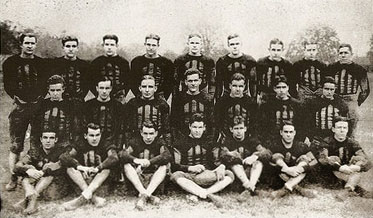 For example: In the early 1920s, football was under attack as part of a larger debate of the balance between athletics and academics in higher education. Historian Andrew Doyle has done some excellent work on the subject in terms of the Alabama and Auburn programs.

The issue rings true when you read Edson's book and come upon a passage noting comments made by then president George Denny in the spring of 1921 as a rebuttal to the "de-emphasizers" of the sport at the time.

Perhaps the most frustrating thing about reading Alabama's Crimson Tide are the details Edson offer that leave you begging for more information. Like the 1913 Tennessee contest where Edson reports Bully Van de Graaff "almost lost an ear when he made a tackle and was replaced." Turns out Van de Graaff, who was Alabama's first All-American player, tried to rip the entire ear off so he could return to the game but his teammates stopped him.

These nagging little questions become countless once you start looking for them in Edson's book. So what happened to prompt Wallace Wade to discipline two of his backs prior to the defeat at Wisconsin in 1928? What words were exchanged between the Alabama and Mississippi A&M coaches in 1913 that prompted policemen to intervene in the argument? And what the heck was the highly effective "corkscrew" play Alabama first ran against the Volunteers in 1933?

Alabama's Crimson Tide's vast importance to Alabama football scholarship also creates a few problems. As the authoritative work on the early history of the program, it is the origin of many longstanding errors concerning Alabama football history.

Edson is the one that mistakenly reported which Northeastern prep school the founder of Alabama football, William G. Little, attended and learned the game he later brought back to the University of Alabama. Alabama's Crimson Tides reports it was Phillips Exeter Academy in Massachusetts but the school by that name is actually in New Hampshire. Officials with Phillips Academy in Andover, Massachusetts confirm Little attended their school in 1891.

Still, these mundane errors are minor details when compared to the vast value Alabama's Crimson Tide represents for our understanding of the program's history. And Alabama wasn't the only football team to benefit from Edson's research. Alabama's Crimson Tide turned out to be the first of a trio of archival football books Edson penned.

He went on to produce a similar volume covering the history of Auburn football, War Eagle: The Tigers of Auburn, which appeared in 1952. A book on the history of the Army Black Knights football team appeared two years after that.