Nothing New Under the Sun: The 1937 Rose Bowl and College Football's Unending Controversy

Share All sharing options for: Nothing New Under the Sun: The 1937 Rose Bowl and College Football's Unending Controversy

We’ve joked many times around here that the biggest shifts in the way college football selects a National Champion have all had Alabama at the center, usually because the way in which the Tide was selected so rankled the powers that be that change was seen as a necessity.

For example, from 1964-1966 the Associated Press flip flopped their decision to release the poll before or after the bowl games in response to the way in which the Crimson Tide claimed their national titles in '64 and '65 (and arguably robbing Alabama of a threepeat in '66).

Most recently, after years of fans and media clamoring for a playoff system in college football it took a non-division/conference champion Alabama winning the BCS in a rematch against the only team to beat them during the regular season for anyone with the actual power to implement that radical of a change to the college football post season to get the ball rolling.

But there is also another instance in which the Tide played a role in a major shift in college football’s perception of the national title, one that is less well known since it did not result in the Crimson Tide being named National Champions (or even participating in a bowl game).

Our own kleph has done some great research for a piece over at Remember the Rose Bowl chronicling the controversial decision in 1936 to pair Pacific Coast champion Washington against a 7-1-1 Pitt squad over popular candidates LSU (9-0-1, SEC Champions) or Alabama (8-0-1). Pitt would go on to beat the Huskies 21-0, LSU would suffer their first loss of the season against an undefeated Santa Clara in the Sugar Bowl, and Alabama simply stayed at home, landing at #4 in the AP Poll.

This was three quarters of a century ago but it's still fascinating since the controversy is virtually identical to what we endured last fall. In 1936 the bowl selections incited such a negative nationwide reaction that one could argue it set the course for college football becoming a nationwide phenomenon instead of the mostly regional emphasis of teams, and in hindsight was a foreshadowing of the continual controversy surrounding college football’s postseason and the ways in which fan reaction and media meddling continues to drive the evolution of how national champions are selected.


The selection of Pitt for the 1937 Rose Bowl set the wheels in motion for decades of controversy.

Though national titles were claimed prior to 1936, due to the limitations of that era’s travel options teams rarely played outside their conference/region, and placed a much heavier emphasis on conference titles due to the impossibility of comparing teams from around the nation that rarely (if ever) played each other. A number of formulas and polls had been suggested in an effort to quantify just who the best team in the country was, but to the average fan debating who would win on a neutral field, Alabama or Minnesota, was foolishness. What mattered most was knowing Alabama was better than Tennessee, and a scoreboard was a much easier way to settle that than a formula in a newspaper.

To put it another way, the Rose Bowl started as an excuse for local residents to have a parade, not to decide which college football team was the best in the country because at the time…well, frankly no one cared. In an echo of today’s near constant "money is controlling this game!" criticism, the Rose Bowl’s objective was to make money, and pitting the relatively local Pacific Conference Champion against a highly regarded team from the East gave the game both a built in local audience and a better chance at putting people in the stands.

By 1936 the number of post season bowl games had grown to five with the addition of the Orange, Sugar, Sun and Cotton, though the Rose Bowl was still considered the post season destination for the best two teams in the country. As the original bowl game, the Rose had the cache to secure any top program from the East that it wished while the newer bowls were essentially forced to accept whoever said yes. All that was about to change, thanks to the decision of Washington to extend a Rose Bowl invitation to the Pitt Panthers over popular choices LSU or Alabama.

Fans and media were swift in their denunciation of the choice, with Notre Dame and Southern Cal fans booing the selection when tickets sales were announced during a game, and Tide and Tigers fans deluging Washington AD Ray Eckmann's office with telegrams in an early form of "PAAAWWWLLLL:"

"You're afraid to invite LSU, so let me wish your success with your game against Vassar."

The media helped fan the flames of controversy, first by publishing quotes like this one before the selection had even been made... 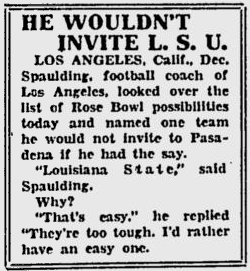 ..and continuing to support the position that "the best teams" had been left out of the game and Washington officials had conceded their cowardice by hiding behind their selection statement and refusing to answer questions about the decision: 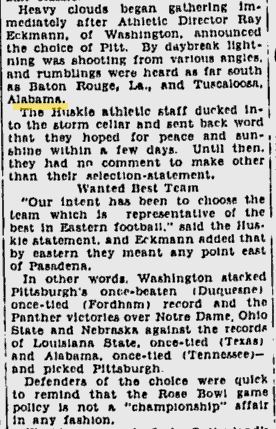 There was even controversy surrounding the financial considerations of choosing Pitt over one of the SEC teams, with bowl officials "confident the game would sell out" and observers in the area being less than optimistic, citing dissatisfaction with the lackluster pairing among fans. Considering the increased criticism of the role money has played in shaping the landscape of college football over the years, it's a little ironic that the Rose Bowl would have been better off had they gone with the team that would have guaranteed the most ticket sales and revenue.

What I find most interesting is the way this decision effectively ended the Rose Bowl's stranglehold on college football's post season. By choosing to "remind that the Rose Bowl game policy is not a 'championship' affair in any fashion," defenders of the Pitt invite essentially endorsed the idea that the other bowl games could (and even should) play a part in determining who the best team in college football was, even though none of the other four bowls had played more than two games at this point, with none of them featuring a pairing between two national powerhouse programs.

By refusing to invite LSU or Alabama, they unwittingly opened the door for the Sugar Bowl to gain significant exposure and prestige by inviting unbeaten, once tied LSU to take on a similarly unbeaten, once tied Santa Clara. The Rose Bowl may have had two more nationally known teams facing off on New Year's Day, but the perception among fans and the media was that the best football was going to be played in New Orleans. One pundit even went so far as to call the Washington-Pitt Rose Bowl a "play-off for second place." In a short sighted attempt to defend what was increasingly perceived as a poor decision, the Rose Bowl devalued their brand to such a degree that even today they face a continued fight for relevance as the "Grandaddy of Them All."

Even more amusing, with the recent agreement between the SEC and Big 12 to form a bowl partnership the Sugar Bowl is once again being touted by the media as a potential replacement for the Rose Bowl as the most significant of the major January bowls.

Fate smiled on the Rose Bowl that season, with Pitt besting Washington to not only claim a National Title, but more importantly to justify their invitation, while LSU fell to Santa Clara (and then did so again under similar circumstances in the '38 Sugar. S-E-C! S-E-C!). The Rose Bowl remained the preeminent post season game for several more years, with our own Crimson Tide making two more trips out west before the decision was made to have the game become exclusively a PAC/Big 10 affair.

But the '37 Rose Bowl and all the surrounding controversy has to be viewed as one of the pivotal moments that took the college football post season from mere exhibition games designed to bring in tourist dollars to an integral part of the way college programs are viewed on a national scale. In the years that immediately followed, the Sugar, Orange, and Cotton all began inviting and pairing football powerhouses like Alabama, Tennesse, Oklahoma, Georgia Tech, and etc., guaranteeing that they, too, were destination bowl games for the top programs in the country, while in the decade that followed the Gator and Tangerine Bowls were also formed to meet the growing demand for more and better post season football.

Further, with the expansion of the college football post season and the increase in cross country match ups that came with it, a growing demand for an agreed upon method of choosing a national champion resulted in the poll era. The AP Poll, which was first published in 1934, took the novel approach of polling sports writers from across the country to determine, by popular opinion, the best team in the country, and it quickly became accepted by the public and media alike as the definitive method for selecting a National Champion.

"Can you imagine going through an unbeaten season with only one tie and not getting a bowl bid?" Thomas remarked a decade later. "Things are different today. You can lose several times and still get into a bowl."

Folks, the same arguments and controversies have gone on in college football for over 70 years now. The men in charge of college football and it's post season will do what's best for themselves, and at some point what's best for them will cause a public outcry for change. At that point, what's best for the powers that be will become change. The times have changed enough that fans in the stands aren't nearly as important as eyeballs on the TV, but the same principle applies; so long as fans have a reason to complain (and the media can gin up enough controversy to keep them complaining) the powers that be will continue to make changes to the post season in order to keep them happy, at least for a few more years until a new controversy erupts.