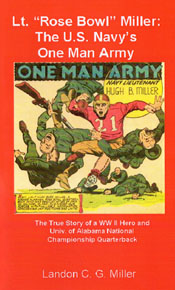 As fans of football, we sometimes take the stories of gridiron heroism for granted. Now and then we are reminded that there are men whose deeds are far more heroic due to the sacrifices they face in making them. Now and then we stumble on a story that involves both.

Hugh Barr Miller Jr. was a football star at Alabama under Wallace Wade, taking a significant part in the undefeated 1930 campaign that culminated with a victory over Washington State in the Rose Bowl. After college he started a career as a lawyer but with the start of World War II he joined the Navy and wrangled an assignment on the USS Strong despite having no sea training.

In 1943 he was stranded for six weeks on an island held by the Japanese after his ship was sunk by a torpedo. He survived on cocoanuts and the meager supplies he was able to scrounge from the bodies of enemy soldiers he killed.

Last year Miller's son, Landon C.G. Miller, self published a book telling his father's amazing tale: Lt. Rose Bowl Miller: The U.S. Navy's One Man Army. The book is clearly not the product of an experienced author but the compelling nature of the story makes that a minor distraction. Once you get started on this amazing tale, it carries you along with its own inertia.

Essentially, Lt. "Rose Bowl" Miller is a Robinson Crusoe story set in wartime. Like most books of this genre, it preoccupies itself with the details of day-to-day survival which, due to the presence of enemy patrols during the entirety of his stay on Arundel Island, were extreme. And the author has the advantage of some well-written past versions of the tale to draw upon.

After Miller's rescue, his experience was retold in an Associated Press story as well as an extensive feature in Life Magazine. The book sticks pretty closely to these previous takes of this extraordinary tale. 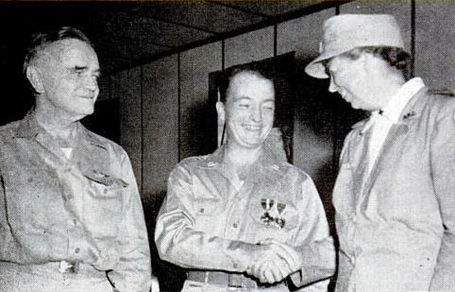 In addition, the story was a pulp standard during the war years. Lt. "Rose Bowl" Miller not only includes several of the covers of these magazines but also reprints a comic book version of the tale along with the narrative. It's an interesting effect since it magnifies the mythology of the event which was used to promote the war effort after Miller's story was made public.

After the fall of Guadalcanal in February 1943, the Allies began attempting to extend their influence further up the Solomon Island chain and began regular patrols in the nearby Kula Sea. On July 5, 1943, Miller's ship was hit by a torpedo and sunk. He suffered internal injuries but helped a group of about two dozen survivors organize to survive.

Four days later, Miller and three others that had survived their ordeal finally washed ashore on Arundel Island occupied by the Japanese. After several days Miller -- who was severely weakened due to his injuries -- told the men to leave him and try to reach safety. Now stranded alone, Miller's only "weapon" was a penknife with a one inch blade.

He battled thirst, hunger and the constant threat of discovery by Japanese patrols for the more than five weeks he was stranded on the island. Eventually he was rescued after a low-flying American patrol plane spotted him and, seeing his distinctive red beard, identified him as a US serviceman.

It's almost impossible to tell how much of this story is completely accurate and how much of it has been embellished by retelling and the Navy's wartime public relations machine. Yet the raw knowable facts of Miller's experience make the point moot. To just have survived the ordeal was a breathtaking accomplishment.

Miller was twice nominated for the Medal of Honor (one of two former Alabama players to be considered for the nation's highest honor) but was awarded the Navy Cross for his efforts to save his fellow crewmen and his ability to survive so long while continuing to harass the enemy companies he encountered.

After his rescue, Miller credited his survival to two things; his rural upbringing in Alabama which prepared him for handling the environment and his time on Wallace Wade's football team.

In this book, his son says Miller learned tenacity and the importance of never quitting as he struggled to make it onto Alabama's varsity squad. According to Lt. "Rose Bowl" Miller there is a small memorial for Miller (who died in 1965) somewhere on the UA campus. It reads "Fight, Fight, and keep on fighting. Never give up."