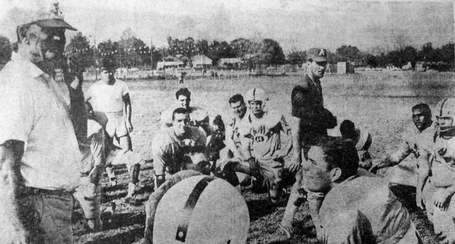 Coach Bryant addresses the Alabama squad during the 1967 spring practice.
At the far right is Dock Rone, the first black athlete to don a
Crimson Tide uniform as a football player.

Alrighty kids, I'm heading off this week to attend the annual convention of the North American Society for Sport History. Now I'm not crashing this shindig because I get my kicks from listening to academics drone on about esoteric subjects at length, I'm delivering one of the papers.

"Walk-On: The Forgotten Pioneers of the Integration of the Alabama Crimson Tide Football Program" is a look at the five black athletes who tried to make the team in the 1967 Spring practice. I've been told I shouldn't wear my 2011 BCS National Championship shirt when I give the talk as it's seen as bad form. Party poopers.

Now since I am at this thing, I might as well check out the other offerings and digging through the program there are a number of talks I plan to peek in on and possibly post about down the road.

And then there are these two. For the first one, I plan to be in the front row giggling like a schoolgirl and I will DEFINITELY be wearing my BCS National Champions shirt to the second.