The RBR Reading Room: A War In Dixie

Share All sharing options for: The RBR Reading Room: A War In Dixie

The rivalry between Alabama and Auburn holds an endless fascination for sports media. The prospect of finally producing a work that sums up the intense emotions (and subsequent actions) on both sides of the intra-state series is like a siren song to sports journalists. But the failures to capture the essence of the Iron Bowl are far more common than the successes.

The 2001 book, A War In Dixie, was a creative approach to the problem. The two authors, Sports Illustrated's Ivan Maisel and USA Today's Kelly Whiteside, were embedded with the coaching staffs in the run-up to the 2000 contest -- a landmark as it was the first to be played in Bryant-Denny Stadium in almost a century.

The idea is that by making the coverage completely equal (like with the double cover approach shown above) the result would be a more comprehensive narrative as well as one that was completely fair to either side. In an ideal world it would be a tome both fanbases could embrace. They just happened to pick a year that was the start of an ugly six-year slide for the Crimson Tide that not too many Alabama fans are likely to want to relive any time soon.

For those who don't remember (or who have successfully purged the memories) Alabama entered the 2000 season with high hopes and a No. 3 ranking. The campaign peaked in Rose Bowl Stadium in the season opener when Freddie Millons returned UCLA's first punt 71 yards for a touchdown. From there it was all downhill -- up to and including the Iron Bowl. For an Alabama fan, the day-by-day, minute-by-minute account is unpleasant to extreme.

Still, A War In Dixie, is a well-written and surprisingly introspective work. You get so used to the sports media grabbing the low-hanging fruit when recounting the subject it's almost a shock to see someone try and delve deeper and look behind the played out caricatures. While Mailes and Whiteside sometimes let their subject's soliloquies go on a bit long, they provide a treasure trove of information about the inner workings of two programs headed in opposite directions.

There are a ton of great details here: Tommy Tubberville's budget included a $1,200 line item for popsicles, all the photographs in The Tuscaloosa News' archives from the Bryant years have been lost or stolen and CBS assured its Alabama affiliates that they would allow a split screen telecast if the Supreme Court issued its verdict on the hotly contested 2000 presidential election during the game itself.

A War In Dixie is pretty much a depiction of the Alabama football program at it's most dysfunctional. Head coach Mike Dubose seems completely out of his depth in every way. He's already lost his job and almost certainly lost the team. His pep talks seem more to bolster whats left of his self-respect than actually motivate anyone to victory.

The problems are clearly far too grave to be resolved by a last-minute miracle. The offense is hobbled by a coordinator inclined to a more wide-open attack (that had significant success the season prior) but stymied from doing so. There is a constant bemoaning of not having enough time to address everything that needs to be done which makes one wonder what the heck they were doing in the fall.

If you want an example of that complacency caused a sense of entitlement Saban constantly warns about, look no further than the 2000 Crimson Tide. When the strength and conditioning coach is asked about the progress of a player in July his response is he has no idea "I haven't seen him in three weeks."

Alabama's preparations for their final game of the season are punctuated by coaches putting their belongings into boxes and pondering their next job. In contrast, Tommy Tuberville's star was rising fast and he clearly knows it. He has a 5-year contract extension literally sitting on his desk and the comfort of knowing his team boasts a dominant rushing attack facing a defense that hadn't kept an opponent under 100 yards on the ground all season.

When A War In Dixie finally reaches the 2000 Iron Bowl game itself it proves to be an appropriately dour and ugly conclusion to the book for Alabama fans who braved their way through it's unpleasant 200-plus pages. It proves to be a grinding contest played in a freezing rainstorm. The only scores were field goals and Auburn made three of them. The only thing left is a short epilogue that full of names Alabama fans would prefer not to hear ever again; Dennis Franchione, Logan Young and Albert Means. 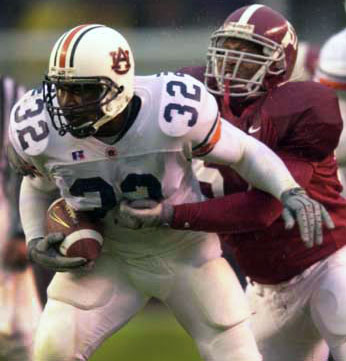 Auburn's Rudi Johnson didn't get in the end zone
but he let the Tigers control the time of possession.

Still, in a strange way this book is the sequel to Warren St. John's superb Rammer Jammer Yellow Hammer. That book told the story of the miraculous 1999 season that saw Alabama beat Steve Spurrier's powerful Florida team twice -- once in the regular season and once for the conference crown. Along the way, the Tide took care of Auburn in Jordan-Hare Stadium as well.

The two books contrast extremely well. Rammer Jammer Yellow Hammer was a fairy tale season seen from the fan's perspective. A War In Dixie is a nightmare campaign told from inside the program. It's the day-by-day preparations of a doomed coaching staff trying in vain to salvage the last, and most important, game of the season.

In a way, that makes the two books a more true depiction of the Iron Bowl rivalry than any of the countless books, newspaper articles and documentaries that have purported to finally capture its bizarre essence.

No matter what side you take or how much you invest in the outcome of the game, the bottom line, as Jerry Heinnen pointed out on this site two years ago, is that the series is important. And the contrast between Rammer Jammer Yellow Hammer and A War In Dixie shows that a key reason for that is because it continues. No single one of the games completely resolves anything no matter how much we want to believe it so and the prospect of next year is critical to why we find the thing so compelling.

The rivalry isn't simply an interconnected history of hatreds and tit-for-tat vindictiveness played out on the football field once a year, it's a relationship that verges on the symbiotic. For Alabama, there is the inescapable fact you are, to a certain extent, defined by your nemesis. The Crimson Tide wouldn't be the same if the biggest game on the schedule each year was, say, UAB. Auburn may be widely reviled but they are recognized as a force to be reckoned with in college football.

For Auburn, the undying desire to match the cross-state rival ensures a continued relevance on the national stage. Even if, over the history of the programs, the Tide has tended to get the better of the Tigers, the fact that Alabama has been so good for so long has resulted in Auburn winding up doing pretty darn well themselves when all is said and done. That interdependence, of course, only makes the animosity that much more bitter on both sides.

A War In Dixie is one of the few books that seems to understand this idea and the introductory chapter that provides the background of the series is one of the strongest I've seen on the subject. Typically, the tack taken is to find egregious examples of stupidity on the part of the two fanbases and hold them up as some type overriding metaphor for the entire rivalry. Instead, Maisel and Whiteside make an effort to explain the social and historical context before trotting out the idiots.

(One of the most revelatory moments in the book is when Auburn's former publicity director points out that the development of Alabama's road system was intimately tied to the evolution of the series. This is possibly the most important, but universally overlooked, factor in the development of college football over the past century and deserves far more study.)

The 2000 Iron Bowl game was the start of one of the roughest patches for Alabama football and one of Auburn's longest streaks in the Iron Bowl rivalry. Just like a half-century before, the lack of success against the intrastate foe prompted the school to seek out the coach that could fix the situation. And now we are back to the status quo where single memorable victories must tide the Tiger faithful over for years on end. The one thing we can say for sure is that it'll come back around again eventually.