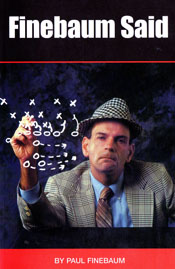 Paul Finebaum may be one of the most vilified figures in Alabama sports media but he also boasts one of the largest audiences. Coach Saban doesn't sit down and chat amiably with the man on-air at SEC Media Days because he's got a few minutes to blow the breeze. A Finebaum interview reaches a lot of people and a few words on his show carries a message an awful long way.

The fact Finebaum is almost invariably pegged as the clown prince of sports commentary in the state completely overlooks his influence. His opinion has authority because the fans have given it to him. This also leads to the most common mistake people make about the man; that his opinions are the same as the (in)famous callers to his radio show. They're not and an even cursory glance at his print output demonstrates this.

These issues are put in stark relief in Finebaum's 2001 book, Finebaum Said. It's a collection of his columns printed in The Birmingham Post-Herald between 1994 and 2001. (The first collection of his work The Worst of Paul Finebaum appeared in 1994.) Taken as a whole, Finebaum Said offers some important insights into exactly what it is about this media personality that has captured (and inflamed) the imagination of college football fans in Alabama and nationwide.

Finebaum the columnist isn't particularly artful in a stylistic sense and his insights into the strategy of the game aren't revelatory either. Typically his pieces find a touchy subject and offer a specific stance on it. His true talent is sniffing out precisely the issues that cause his audience to react. And react they do.

The cover photograph for Finebaum Said a vivid example. It features Finebaum in a plaid fedora and a grim look on his face marking what seems to be some type of play in the air in front of him. It's an obvious parody of the photograph of Coach Bryant used in a 1980 Time magazine cover. The analogy is designed to outrage but it's also instructive. Bryant's photo features actual plays from his playbook, Finebaum is just drawing X's and O's in the air.

Yet Finebaum Said illustrates two important aspects of Finebaum's approach that delineate him from a simple contrarian -- he takes pains to make a reasonable case for his opinion and, more importantly, he makes a practice of noting when he is wrong. The cacophony that results from his observations often causes this to be overlooked but most likely, it's the core reason he's outlasted so many imitators.

The other thing Finebaum Said illustrates is that not only is Finebaum a unique type of media agent but he is also the product of his environment. Finebaum arrived in Alabama in 1980 as a sports reporter at The Post-Herald. The timing was incredibly fortuitous.

As the Bryant era came to a close, Alabama athletics became embroiled in power battles as a power vacuum formed in the absence of the legendary coach's control over the program. Institutional infighting is the lifeblood of investigative journalists. Internal conflict creates crises and crises produce sources with juicy tips a reporter is ready to take down off the record and put in headlines the next day. 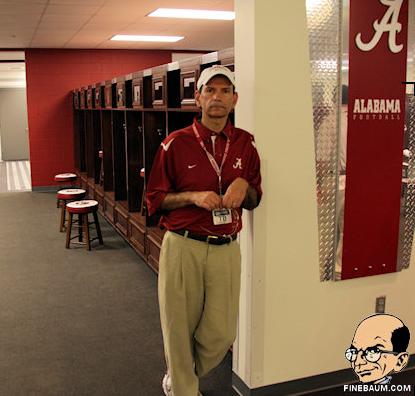 Of course Alabama football endured media-driven crises during Bryant's 25-years at The Capstone but his dominant influence ensured it could be kept arms length from the team itself. With his passing the knives came out and nobody was in a better position to capitalize on it than one Paul Finebaum.

Finebaum notes that he, like many others from his era, got interested in journalism after seeing how the investigative journalism done by the Washington Post in the Watergate scandal. That demonstration of dramatic impact of reporting could have on public life impelled many to emulate the effort.

And while Finebaum did break a number of key stories as a newspaper reporter, the medium was not his real metier.

Finebaum found his calling in the mid-1980s when he went on the radio. Now he had a direct way to connect with the masses and, hoo boy, did they ever respond. The problems in the Alabama football program had given them a lot of opinion about what needed to be done and Finebaum gave them a way to talk about it to everybody.

It's ironic that in 1999, Finebaum dismissed internet commentary as "when someone well-known or is supposedly an expert answers questions from anonymous people with stupid, idiotic names, who obviously have nothing better to do with their lives." The same forces that has driven the popularity of internet message boards and blogs such as this one are those which provided Finebaum his audience in the first place. He just happened to get their before everyone else.

Finebaum Says painfully lays out the sheer turmoil Alabama football endured during the 1990s. It's all here; the NCAA smackdown over the Antonio Langham affair to the bumbling of Bob Bockrath that sent Gene Stallings packing, all the way to the bumbled hiring of Mike Dubose that led to the farcical cover-up of the coach's affair with his secretary. None of it is a pleasant read for the Crimson Tide faithful but it's critically important to remember the dark and ugly places we never wish the program to return to. Finebaum Says provides a blueprint of how things got that bad back then.

Sure Finebaum Says has pieces on NASCAR and The Masters and even a bit about that other football team in the state but if you're reading this book it's for the Alabama football and don't deny it.

The bottom line is that while Paul Finebaum may be a reviled across the state of Alabama (and mocked outside of it) he is never ignored. In many ways the fascination the fanbases of the teams he reports about have created the man and his Yellowhammer State media colossus. H.L. Menkin once said that democracy was "the theory that the common people know what they want, and deserve to get it good and hard." Paul Finebaum's ongoing success proves that maxim holds true for college football commentary as well.