Share All sharing options for: The RBR Reading Room: The Crimson Tide 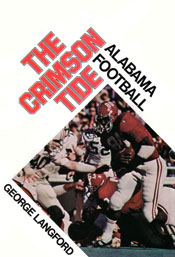 The cottage industry of popular sports history books seems to have appeared in the early 1970s. This makes some sense as the emergence of television as a cultural force in the decade prior whetted interest in sporting events, particularly college football.

Obviously, the success of the Alabama football under Paul W. Bryant in this same era made the Crimson Tide an early subject for these types of titles. The first seems to have been Clyde Bolton's 1972 book The Crimson Tide and two years later saw the arrival of George Langford's The Crimson Tide: Alabama Football. From there, the land rush was on.

Langford's book was part of The Illustrated College Football Series issued by Henry Regnery Company in Chicago and Bolton's book was also part of a series put out by Huntsville's Strode Publishers. As a result, they both cover much of the same ground in a similar manner. In fact, these two titles pretty much established the format you see repeated right up to the present day with Craig Stephenson and Kirk McNair's Always A Crimson Tide.

The Crimson Tide was certainly a product of its time. Alabama football was at the mid-point of the Bryant era. The initial glory days of the 1960s were in the past as was the not-so-glorious seasons at the end of that decade. But by 1974 integration had occurred, the wishbone had been installed and the Crimson Tide were, once again, one of the most dominant programs in the country.

As a result, Langford offers a profile of Bryant that touches on all the relevant topics -- the coach's work ethic and his routine -- while respectfully acknowledging the reverence the Alabama faithful already held for him. Controversial topics such as the lawsuit with The Saturday Evening Post are addressed and put safely in the confines of the past. There's interesting detail but nothing revelatory and that's pretty much what you expected anyway.

Now one drawback of the more contemporary titles is the sheer amount of information they include. Obviously, any book is going to be skewed to the time period it was produced and that means there will be less emphasis on those eras farthest in the past. Recent Alabama books tend to give a reverent nod to the accomplishments of the pre-Bryant teams but they just don't have the number of pages to cover them fully.

The Crimson Tide doesn't have that problem. It gives one of the better overviews of Alabama football's early history, relying on the remembrances of legendary Alabama sportswriters Zipp Newman and Naylor Stone.

The shorthand version of the tale is that UA President George H. Denny hired Wallace Wade and winning football commenced from there. Langford lays out how coach Xen Scott's contribution made Wade's success possible as well as the key role people such as assistant coach Hank Crisp and Athletic Director Charlie Bernier played in that process as well.

The Crimson Tide also gives a great deal of emphasis to the oft-overlooked Frank Thomas era at the Capstone. In his first four seasons the Tide lost just four games (and tied once) and half of those were at the hands of Robert Neyland's Tennessee teams. If you want to know where the Third Saturday in October rivalry was born -- this is it. "That little bastard is the smartest damned coach I ever coached against," Neyland once said.

The other wonderful thing about this book is it has actual statistics. One of the most frustrating things about digging further back into the history of the program is the scarcity of hard numbers. You tend to have to take what you can get and, pretty often, what you get is lacking. Langford, though, makes it a point to include the relevant stats about many players you rarely see elsewhere.

A few examples: Dixie Howell had three punt returns for more than 80 yards in 1933. In his career at Alabama, Harry Gilmer had 1,673 yards rushing, 2,894 yards passing and a completion percentage of 53 percent. He also had three 90+ yard kickoff returns.

Bottom line, The Crimson Tide is a very well-done book that is certainly a product of its era. It's not high literature or even cutting edge journalism but it's not supposed to be. The Crimson Tide a fan book produced at the very beginnings of the media machine catering to sports market that is so omnipresent today we take its existence for granted.