The phenomenal success of Alabama football in the 1970s created a boom in books about the team and its legendary coach Paul W. Bryant. The publication of Bryant's autobiography in 1974 was certainly a catalyst to this and one of the more interesting tomes that appeared in the wake of that book was S.C. Lee's Young Bear: The Legend of Bear Bryant's Boyhood four years later.

Lee is the pen name for an author that wrote several titles for Strode publishers in the late 1970s and early 1980s. The biographical blurb describes him as a successful businessman who had been a multi-sport coach at a religious prep school in Kentucky. Apparently Lee wrote a number of sports related titles including several more for Strode Publishers.

(Strode was a Huntsville-based publishing house that specialized in easily accessible sports books. They arguably started the Alabama football publishing trend in 1972 with Clyde Bolton's The Crimson Tide. The publisher went out of business in the mid-1980s but if you run across any of their titles in a used book store, they are almost always worth picking up and giving a read.)

This is a fictionalized telling of Bryant's boyhood that incorporates most of the oft-repeated incidents you can find detailed more formally in other biographies of the legendary Alabama coach up to and including the famous bear-wrestling incident at Fordyce's Lyric Theater. It's not particularly historically accurate but, given the format of Young Bear, that's not really the point.

This book is clearly aimed at young adults given the reading level it's written at and it's broad moral tone. Young Bear heavily emphasizes religious values and a strong work ethic. While it's not an outstanding example of this genre by any means, it's certainly much better that one would have any reason to expect.

What is interesting about it is how football is pretty much ancillary to the story, not becoming a key part of the narrative till the very end and then in a far more understated manner one might expect. Instead, Young Bear is a pastoral reminiscence of life in the rural south that throws in a little bit of the mischievous elements of Mark Twain's Tom Sawyer for good measure. 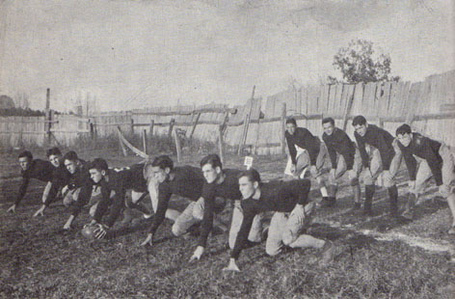 The 1930 Fordyce Redbugs team with Bryant at left tackle.

It's in this regard it actually is quite interesting as this era has largely passed beyond living memory and it can be difficult to understand the day-to-day concerns of people that lived in the rural south then.

The book depicts the impoverishment Bryant endured as he grew up but rather than belaboring it, Lee uses it to frame the nurturing aspects of his family and, particularly, his mother. That's an interesting approach since other books have tended to cast Bryant's desire to rise above the social restrictions of his agrarian upbringing as a motivating force in his life.

One reason Lee might be avoiding the all-too-common "rags-to-riches tale told in the Southern vernacular" is that Young Bear is only concerned with Bryant's boyhood. There are references to Bryant's future success but they are scarce as they are brief.

One fascinating component of the book is the artwork. There are crude illustrations that depict key points in the story but these are interspersed with what seems to be pages from someone's scrapbook. They include pictures of Bryant as a player as well as newspaper clippings about the Fordyce high school football team.

Perhaps the most intriguing is a newspaper article about Bryant's teammates Clark and George Jordan. It explains how they were going to the University of Arkansas as their eligibility to play high school football had expired. The kicker -- they were both 21 years old. Little wonder the Redbugs won the state championship in 1930.

Young Bear is a nice little addition to one's Alabama football library if you can find a reasonably-priced copy but it certainly isn't a must-have book for the average fan. I enjoyed the read but, most likely, I'll pass this one along to my brother to read to his son -- another salvo in my never-ending effort to ensure my nephew is a die-hard Crimson Tide fan.