Alabama by the Numbers: A Century of Win/Loss Records and Win Percentages

Share All sharing options for: Alabama by the Numbers: A Century of Win/Loss Records and Win Percentages

Last weekend, AJ McCarron let us know that the 2012 Crimson Tide team motto is "Be Legendary." That's fitting because for a squad that has reached the top of college football the only way to keep that fine edge is to look for even more lofty goals. Everyone else might be trying to knock the Tide off the top of the heap but Alabama is trying to rewrite history.

Since Alabama wrote a rather large chunk of the sport's history, that means contending with the program's own past. While championships and titles do matter the point of the endeavor is winning and Alabama's done a lot of it. Here is the win-loss record for every Crimson Tide team over the past century. (And, no, it does not account for NCAA sanctions since what we're trying to evaluate here is performance, not what the arbitrary nonsense issued forth by the ninnies in Indianapolis.)

In the past four seasons Nick Saban has returned the Crimson Tide to the level of excellence established by the other four coaches whose statues stand next to his in the Walk of Champions. Since 2008 Alabama has lost just six games and earned an .887 win percentage. Just seven Crimson Tide teams in the past century can boast a better four-season stretch and only one of those wasn't coached by Paul W. Bryant (and two other of his teams reached the .886 mark).

The cautionary tale here are the spans between Bryant and Stallings then Stallings and Saban. These up and down seasons painfully underscore Saban's point that success is tough to achieve but sustaining it is even harder. The true test of how legendary this program will eventually be has shifted from getting to the top to staying there and no season is more critical to that than the one ahead.

To measure how past Tide teams have succeeded in terms of consistency over time the year-to-year win/loss record is of limited value. Win percentage gives a more reliable measure of success between seasons due to the fact teams today play so many more games than in the past.

So here is a graph showing the the four and ten year average win percentage for the Crimson Tide since 1910. (We're using four-year measure as it's a reasonable window for comparing individual teams due to NCAA eligibility rules. Obviously that's skewed a bit with the practice of red-shirting some players and the early departure of others to the NFL draft.)

If Alabama suffers a one-loss season in 2012, Saban will have led the Tide to the best four-year stretch under any coach other than Bryant. If Alabama goes undefeated, we will have witnessed the greatest four seasons in the history of Crimson Tide football.

What is even more astonishing is the ten-year win percentage. At the time Saban took over at Alabama it had dipped to the lowest level since the dark dark days of J.B. Whitworth. The turnaround of the program since he stepped off that plane at the Tuscaloosa airport on Jan. 3, 2007 certainly echos Bryant's achievement more than half a century ago.

Which the worldwide leader noted with this graphic last night (via @SEC_Chuck): 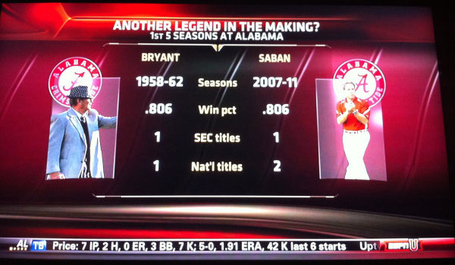 So, yes, Bryant and Saban are about the same in terms of win percentage over the first five years of their tenure. As you might expect, that's only part of the tale. Here are the win percentage for every Alabama coach with a statue on the Walk of Champions over their first half-decade in Tuscaloosa (the raw numbers are after the jump).

It should be noted that Saban's total without the games vacated by the NCAA is .821 and Stallings' jumps to .833 when the forfeited contests from 1993 are accounted for. So, by this measure Saban's production on the field has actually been better than Bryant's over the same span of their career at the Capstone. And both of them are significantly behind Alabama's three other National Championship-winning coaches for that same period.

When calculating win percentage, ties count as a half-win. So win percentage = wins + (ties/2) / total number of games played. These are the numbers to plug into that formula to compare the first five seasons of Alabama's five National Championship-winning coaches.