ed.- bumped from that fanposts, some really good stuff in here.

I wanted to see not only how often we had beaten other SEC teams, but the average point differential in all of our games against them. As such, I went to www.cfbdatawarehouse.com, and looked at Alabama’s records against other teams.

In this FanPost, I’m going to be looking at point differential. I’m not going to use the phrase "margin of victory" here, because that could be misinterpreted as only looking at the games that Alabama won (ie, the "victories"). The exact statistics I’m looking at are cumulative points Alabama scored on each opponent, the cumulative points that our opponent scored against Alabama, the delta (defined as the difference between points for and points against), and delta per game.

In conclusion, I found statistical support for that which most of us have always innately known: Tennessee and the Auburnite truly are our rivals. I also learned a couple of things that surprised me about our neighbors to the east. Read below the jump for a lot of statistics, a little analysis, and even a chart or two (or six).

The College Football Data Warehouse has all of the statistics I wanted except for total games and delta per game. I thought I could arrive at total games easily enough by adding wins, losses and ties. Then, divide total delta by total games, and I thought I would get delta per game. However, when I started compiling these stats, I noticed a couple of ridiculous per game deltas against teams we hadn't played very often. When I examined more closely, I learned that the Warehouse doesn’t count vacated wins as "wins," because, well, they were vacated, but still counts the points scored in those games when calculating the "points for" statistic. This resulted in an artificial inflation of Alabama’s per game delta against several opponents. So, I counted up the vacated wins as best I could and added them to the "win" column so they would count as games (I did NOT alter the listed winning percentages). 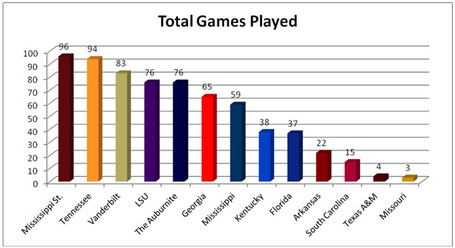 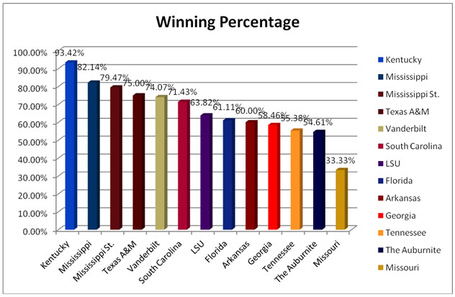 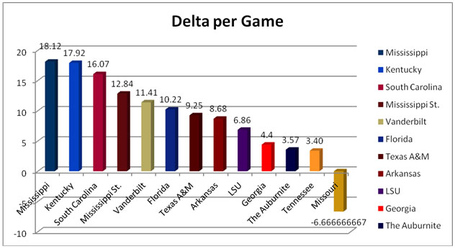 I think this information, viewed together, leads to some fascinating discussions.

We see you there, Missouri. Enjoy it while it lasts.

There have been many conversations on this site about the meaning of the word "rivalry." We have played Mississippi State more than we have played any other team in the country (96 games). When we’ve played, we’ve beaten them four out of every five games (79.47%), and the average point differential has been Alabama by 13 points (12.84). That is not a rivalry.

Tennessee, on the other hand, we have played only twice fewer times than Mississippi State (94 games). We hold a 5.38% edge over the Vols, and the average point differential is Alabama by a little over a field goal (3.40 points). Awesome. Same with the Auburnite: 76 games, 54.61% winning percentage, 3.57 point average delta. Rivalries.

I have come to the opinion that we give Georgia entirely too much crap. We’ve played Georgia more than we’ve played Ole Miss, Kentucky, or Florida, not to mention our brothers from 1992 and 2012. We have a lower winning percentage and lower average point differential against Georgia (58.46%, 4.4 delta) than any SEC team not named Missouri (33.33%, -6.67 delta), the Auburnite, or Tennessee, and we never even played against Herschel Walker. You’ll notice that a single point separates the deltas of Tennessee, the Auburnite and Georgia, and then there is a jump of 2.46 to LSU, then another 1.82 to Arkansas, and so on. Georgia has been pretty competitive with us for a long time.

Ole Miss and Kentucky have historically been dreadful against Alabama, but I think we've all known that for a long time.

Just for kicks, I will now repost the above graphs, but add in non-conference (at least non-CURRENT-conference) opponents whom we have played as often as or more often than South Carolina. REMEMBER! These are not our 21 highest winning percentages, or the 21 highest deltas - these are the 13 other 2012 SEC teams, and the 8 other schools we’ve played as much or more often than South Carolina (the 1992 SEC school we’ve played the least). 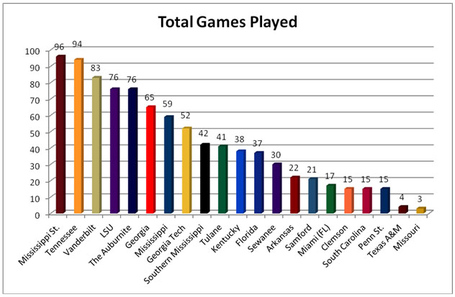 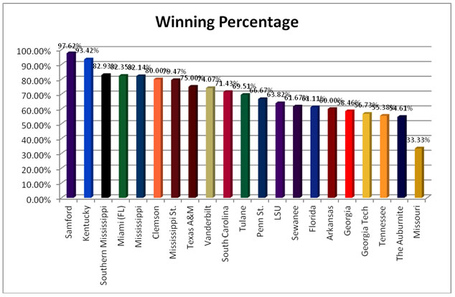 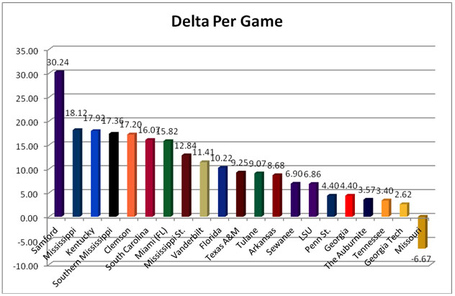 Some interesting stuff in there, too. First off, Georgia Tech left the SEC in 1964, Tulane left in 1966, and Southern Miss has never been a member, but we’ve still played those three schools more than we’ve played fellow SEC founders Kentucky and Florida (remember, seven of our 37 games against Florida have come in the SEC Championship Game). Sewanee left the conference in 1940, and we’ve only played them seven fewer times than Florida (so the same number of regular season conference games), and we won’t have played Arkansas as often as the University of the South until 2019. If something similar to current conference scheduling endures, and if we never play Georgia Tech again, it will be 2041 before we've played Arkansas as often as the Rambling Wreck.

I'd like to thank kleph for his help with this post. As a closing Interesting Fact, the team we’ve played next most often is Virginia Tech at 12 games.