The RBR Reading Room: The Long Gravel Road to Bama

Share All sharing options for: The RBR Reading Room: The Long Gravel Road to Bama

One of the challenges to writing a memoir of one's life is the tendency of our associations to define us. This is a problem for the reader as well. It is difficult to look at past Alabama football players and ever see them as anything else. There's almost a presumption of destiny about the thing that can be a barrier to understanding the person who had to struggle to become what we assume about them today.

Jim Grammer's The Long Gravel Road to Bama finds a way to avoid that paradox with an intimate and unique telling of how he came to play for Alabama and Paul W. Bryant. Grammer is less interested in the usual paean to his coach and his football team than telling the story of he and his brother, Richard Grammer, who also played for the Tide.

The book was self published in 2004 and, as a result, suffers a bit from the lack of a proper copy editor and typesetter. These are quibbles. The fact is Grammer is an exceptional writer with an honesty that is as surprising as it is appealing. He also has an incredible memory for people and incidents from his youth.

While The Long Gravel Road to Bama is an autobiographical memoir it is dominated by the presence of his brother, Richard, who was a year older and ahead of him at Alabama. Richard Grammer’s last game for the Tide was the 1969 Liberty Bowl. Just a few days later – and the week of his wedding – Richard died in a boating accident on the Tennessee River.

That loss permeates Grammer's book and puts every event he recounts into a slightly tragic light but it seems to have honed his recollection immeasurably. The irony of The Long Gravel Road to Bama is that because Grammer focuses so much on this he doesn't take the usual route to telling the story of his time as an Alabama player. It has led him to produce an irreplaceable document about the experience.

Grammer arrived at Alabama in 1967 where he played on the freshman team. He became a starting center and would eventually play for the 1971 'turnaround' team (after redshirting his sophomore year). Both he and his brother both became All-Conference players but weren't among the superstars of their respective squads.

This is another enormous asset for The Long Gravel Road to Bama since there is a familiarity with the teams the Grammers played for but probably not for the story of these particular players. The preconceptions one might already have about their past simply aren't there and you open the book hearing the story for the very first time.

The typical tale of the Alabama team involves a rolling cast of players that can be difficult to keep track of after awhile. A handful might get a bit more biographical detail but even then it won't be more than a character sketch with an interesting anecdote or two. They invariably skip quickly over the early years of these athletes to get right to the nitty-gritty in Tuscaloosa. 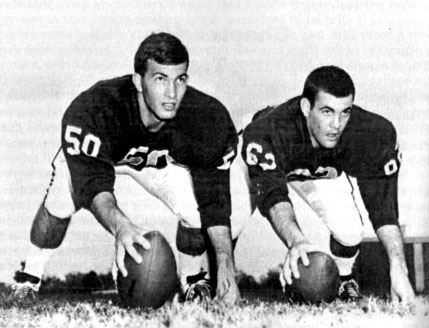 The Long Gravel Road to Bama is different. Only the final third of the book tells of his time playing for Alabama. The rest is a series of stories about growing up in rural North Alabama.

This is fascinating because it gives a unique window into the world that the young men who played for the Tide in that era emerged from. Hartselle was hardly at the epicenter of the dramatic events that occurred in Alabama and the nation at large in the 1960s but it wasn't immune from them either.

At first glance The Long Gravel Road to Bama is just a collection of little dramas concerning school and family but looked at in context you see the social sphere these players came from in sharp relief.

Grammer's book is, first, a detailed account of growing up in rural Alabama in the 1950s. While not precisely poor they were certainly not of great means either. The incidents that mark his recollections involve the people he and his brother met and interacted with from the time they were children until leaving for Alabama.

Then, when it reaches the point Grammer and his brother sign to play with Alabama he doesn't revert to the usual tales of gritty glory but paints a stark picture of a young man dealing with pressures he'd never imagined and not always doing well at it.

He starts by detailing that unpleasant sensation of feeling completely out of one's depth that many freshmen have to endure. That bewilderment is barely at bay when the brutal training regimen required by Bryant and his coaching staff begins. Grammer probably gives the best account I've ever read of just how difficult mentally and physically life was for a player each and every day at practice.

Then, if that weren't enough, there was the constant hazing by the older players as well as pressure to not make them look bad. Freshmen were stuck in a terrible spot -- if they wanted to catch the attention of the coaches they had to shine on the scrub team, but if they made the varsity players look bad, there was hell to pay as well.

Outside of that were the social pressures on the campus of the late 1960s that gave Grammer little respite from these trials. He describes how this became an ugly cycle of confusion, exhaustion and frustration that seem never to end. It culminates with him finally rebelling and quitting the team.

Its this part of The Long Gravel Road to Bama that is, in some ways the most fascinating. Just about every book ever written about Bryant has to include the horror stories of players slinking off in the night. They are simply branded as 'quitters' and forgotten. Yet many of these were young men pushed farther than they were capable of enduring and abandoning the team was giving up on an opportunity of enormous gravity and not taken lightly.

Grammer explicitly details how he was pushed to that point and then beyond. His mental and emotional struggle with the decision is agonizing. Eventually he does change his mind and is given a second chance but it is not hard to see how fate may not have been nearly as kind to many players just like him.

The book effectively ends with Richard Grammer's death in 1969 although Jim Grammer played for Alabama through 1971. He spends the final few chapters in introspection of how his brother's passing affected his life and offers only a rough sketch of his final two years at The Capstone. He does suggest he might produce a sequel to The Long Gravel Road to Bama at some point and tell this part of the story more fully. If this book is any indication, we would be all the richer for it.

You can find a regular bound copy of The Long Gravel Road to Bama but its limited print run makes it unusually expensive. Yet Grammer has also made it available as an extremely affordable digital edition through Amazon.com. If you have a Kindle reader you really have no reason not to get this book.