Share All sharing options for: The RBR Reading Room: Always A Crimson Tide 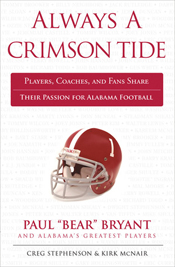 Sports book publishers love series titles. A glance at the shelf of sports titles at any used book store provides a glimpse of how ubiquitous these efforts have been over the decades. Come up with a specific package and gimmick and roll them out for every team with a fanbase hungry to read more about the subject they love best.

The interesting thing is just how many of these books that have been penned about Alabama football have proven to be quality efforts. From Clyde Bolton's book, The Crimson Tide, in the Strode Publishers series to Tommy Hicks' Game of My Life for Sports Publishers, Alabama has been extremely well served in this little genre. And you can add another tome to that list.

Last year, Triumph Books unveiled Craig Stephenson and Kirk McNair's book Always A Crimson Tide: Players, Coaches, and Fans Share Their Passon for Alabama Football, the Alabama entry in their "Always A..." series that includes Georgia, Virginia Tech and numerous other college football teams. This book is no less than a required reference work for Alabama fans who have struggled to keep the long long list of players, games and coaches straight in their head.

Of course this shouldn't be overly surprising. McNair's long history covering Alabama football, first as UA's sports information director and then as founder of 'Bama magazine and BamaMag.com, make him an ideal author of this work. He has a keen familiarity with not just the most prominent names and events in Alabama football history but many of the oft-overlooked greats that deserve their due as well. Always A Crimson Tide makes a fantastic effort to include them all.

Make no mistake, this isn't high literature or something that will appear on the NYT bestseller list. But it's not supposed to be. Judged on its own terms Always a Crimson Tide is a well-produced work that succeeds in it's specific intention in a superb fashion. And Alabama fans are all the better served for it.

The book starts out like a normal fan volume with a piece on the many traditions associated with Alabama football. It intersperses these with "in their own words" segments featuring the individuals involved in a particular game, incident or anecdote. These tend to repeat exactly the quotes used in the narrative, which is a little irksome at first but actually offers the reader an option on how to read the book. You can just go straight through and read the narrative or skip around to the individual commentary of the people interviewed.

And there are some fantastic tidbits strewn in the narrative. Fred Sington Jr. notes that Alabama had 352 names on the roster for Bryant's first Spring Practice in 1958. There were just 42 who reported for practice in the fall. Hootie Ingram recalls how Alabama coach Frank Thomas "discovered" Willie Mays playing for the Birmingham Barons. And on and on and on...

The best part of Always A Crimson Tide are the lists of the schools' great coaches, great players and greatest games that include short blurbs on their importance. Forget which Orange Bowl was Alabama's first? Just look it up in the tally of post-season games (1943 vs Boston College). Can't remember what Alabama head coach running back Bobby Marlow played under? Here you go (Red Drew). Drawing a blank on the name of the defensive back who made the tackle that led to the Goal Line Stand in the 1979 Sugar Bowl? Look no further (Don McNeil).

Regrettably, Always A Crimson Tide's value as a resource that highlights it's most serious shortcoming, it lacks an index. While the organization of the material is well done you really need a familiarity with it to find the key data you might need. A subject index would make that loads simpler.

The book ends with the 2010 season and, given last year's national championship, it's almost certain an updated volume won't be long in the making. Add that index and Always A Crimson Tide will be absolutely essential for any Alabama fan with more than a passing interest in the history of the program.