Share All sharing options for: The RBR Reading Room: They Wore Crimson

One thing is certain, Clyde Bolton was nothing if not prolific in the late 70s and early 1980s. In addition to his duties as a columnist and sportswriter at The Birmingham News he produced books on Alabama and Auburn football history as well one on Alabama basketball.

In his first book on Alabama football, The Crimson Tide, Bolton interspersed the narrative with in-depth takes on individual players that were based heavily upon one-on-one interviews. They Wore Crimson, which appeared in 1980, is a collection of these personal snapshots of ten Alabama players. And it's a great one.

Bolton has an eye for detail that sets the scene for the reader and an even stronger sense of how to get out of the way of the narrative and let the subject tell their own story. Which, it turns out, was exactly the point of the exercise.

"This is not an attempt to recognize 'Alabama's 10 greatest players' or anything of that nature," Bolton cautions in the introduction. "Some of the men were stars, some were not. I selected them because I thought they would have interesting stories to tell."

Easily the best storyteller of them all was Frank Howard. The former Clemson coach played for Alabama under Wallace Wade and he paints an interesting picture of the Crimson Tide program in its first bloom. Some of the details might sound kind of familiar to those who have read about Coach Bryant's method of winnowing the chaff from the roster. 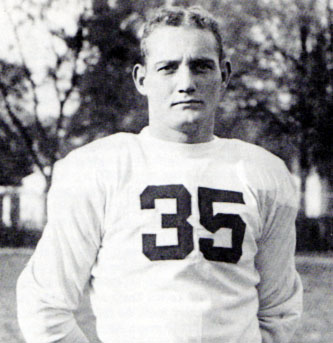 Frank Howard in his Alabama uniform.

"It was survival of the fittest," he recalled. "We started out with 250 freshmen football players and there were 14 left when we graduated. I think one time he tried to run me off "

And even though the Tide and Auburn didn't play each other in those days, Howard makes it clear the rivalry was very much alive and well.

"I wanted to be a poultry farmer. But Auburn hadn't done too well in football, and Alabama had been to the Rose Bowl two or three times, so I decided I wanted to go to Alabama, that I'd rather play in the Rose Bowl than be a chicken farmer."

Yet They Wore Crimson features a ton of other Tide players with fantastic tales to tell.

Like Charley Boswell who played under Frank Thomas in the 30s and then lost his sight in World War II so he became a blind golfer. Or Riggs Stephenson's account of playing for Xen Scott and then his career as a professional baseball player.

There's also Herb Hannah, the patriarch of the Hannah clan, Marlin "Scooter" Dyess who was on the team when Coach Bryant returned and Tarzan White who played in the late 30s and went onto a career as a professional wrestler. Perhaps the most recognizable name in They Wore Crimson is Ozzie Newsome.

Bolton's book is and enjoyable trip into the history of Alabama football through the eyes of the men who made it and the fantastic journey's their lives took them on after their time at the Capstone. It's filled with details of what the university and the program was like that goes far beyond the official records we so often are reliant upon. In this respect, They Wore Crimson is one of the best books about Alabama football produced in its era and one well worth reading today.