Share All sharing options for: The RBR Reading Room: Legends of Alabama Football

We've used the term "hagiography" numerous times over the years when describing the books penned about Alabama football. The word refers to books about the lives of the saints and they have been common in the Catholic Church since the Middle Ages. In modern usage the word is typically pejorative; suggesting an uncritical or "reverential" perspective a writer takes toward their subject.

That perception might be a tad unfair. It suggests any account of a particular subject must incorporate sharp criticisim to be valid. Instructional value is ancillary if not actively adverse. But if you've decided to be a devotee, you gotta start learning about your subject somewhere. For Crimson Tide fans, a good place to start is Richard Scott's 2004 book, Legends of Alabama Football which is probably the most "hagiographic" tome about Alabama football we've reviewed to date. And that's not necessarily a bad thing but you have to keep it in perspective.

The Bryant entry is a good example. It starts with a description of the legendary coach as a conflicted individual but quickly sets that aside to discuss his many accomplishments. Noting the fact Bryant chain smoked and drank quite a bit on occasion doesn't really do much to temper the praises of his achievements that follow. It seems a bit needless. Why not go right into a description of Bryant's accomplishments and skip the qualifier?

More egregious is the omission of the lawsuits against The Saturday Evening Post and an almost offhanded mention of Bryant's role in integrating Alabama athletics. These are certainly touchy topics but understanding them does much to understanding Bryant.

Yet getting bogged down in this debate misses what Legends of Alabama Football does best -- providing clear and well written biographical synopses of the men who contributed to Crimson Tide football history. While we all might know at least the outlines of Bryant's story, there are a host of others we simply might recognize the name. This book is a great way to expand our understanding of who these men are and why we believe what they did is important.

Legends of Alabama Football tells the story of three Alabama coaches and 27 players. Certainly the names you know are in evidence -- Bryant, Namath, Newsome -- but there quite a few you might need a refresher on such as Gilmer, Musso and Bennett. And there a handful you probably know less about than you should like Lyons, Hannah and Cain. And there are a few head scratching omissions such as Van De Graff, Kilgrow and Stallings.

In each chapter Scott does a great job providing a five-to-six page sketch that has the most basic information and anecdotes about the individual that doesn't bog you down in data like other efforts tend to. The obligatory anecdotes are accounted for and there's almost always a piece of information you may not have known as well. 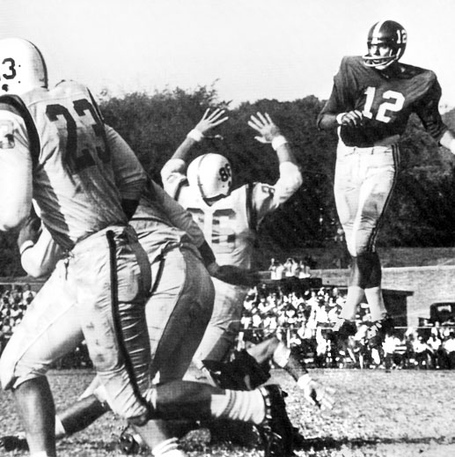 Of course, Alabama players have pulled off some
pretty miraculous feats from time to time.

One nice thing about the older entries is that Scott has done a good job digging through the mountain of previously produced titles about Alabama football. Having a book like Legends of Alabama Football that boils down the best bits of these is actually rather convenient for the casual reader.

The chapters on more contemporary players derive from interviews and kind of fall into that familiar pattern you'll recognize if you've picked up this kind of book in the past. By this point, most of these players kind of tell the same story over and over.

The greatest hagiography, the Acta Sanctorum, is recognized today as a critical source for knowledge of societies, cultures and civilizations from the beginnings of Christianity to the Middle Ages. It remains of significant importance to devout as well as the objective modern scholar. The modern usage of the word "hagiography" has proven woefully insufficient to the task of doing justice to its subject.

Certainly books like Legends of Alabama Football aren't exactly in the same class as such a vastly important scholarly effort but that's not to say there isn't a significant parallel to be drawn.

Prior to the printing press, books tended to be on subjects of interest to religious scholars -- like the lives of the saints. After Gutenberg, publishers continued to produce such religious tomes precisely because of the interest in them. The tendency of college football fans to have a keen enthusiasm in works about their team and be willing to pony up their hard earned money to aquire them is something 17th century publishers would recognize immediately.

Legends of Alabama Football was written for people who wear houndstooth baseball caps without a shred of irony, and it does a great job of it. Moreover, it's a good summary of the key coaches and players in Alabama history for then non-Tide fan who simply wants a better familiarity of the subject. Its a hagiography in the best sense of the term.