The RBR Reading Room: The Will to Win

Share All sharing options for: The RBR Reading Room: The Will to Win

This is the little book that started it all. When Alabama returned from Pasadena after pasting the Washington Huskies in the 1926 Rose Bowl, the team's tireless promoter, Champ Pickens, put together a pictorial book about the trip, The Will To Win. It is, according to the Bryant Museum, the first book about Crimson Tide football ever published. As pointed out by Buffpup323 in the comments below, it seems that prior to this effort, Pickens produced a book commemorating the 1924 season titled simply "Alabama."

The book itself is a collection of 22 photographs of the trip to California, their stay at Hotel Huntington, the game itself and the team's triumphant return to Tuscaloosa. It also includes a foldout panoramic photograph of the Rose Bowl taken just after kickoff. There are also a handful of articles about the game by noted sports writers including Daymon Runyon and Walter Eckersall (who was also a referee in the game itself).

The Will To Win was reprinted in 1994 when a pair of Alabama fans obtained an original copy and did a limited run of 1,500 copies with a crimson-colored cover.

So how valuable is this book? Well, a good quality copy of the original went for more than $7,000 earlier this year according to Heritage Auctions and one of the reprints sold on an online bidding service for more than $200. So, yeah, stumbling across a copy of this one in a yard sale is probably not going to happen. 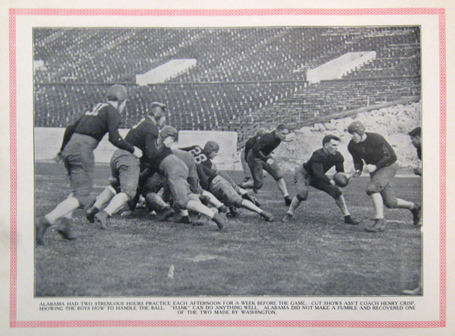 This page of "The Will To Win" shows the Alabama team
at practice in California prior to the 1926 Rose Bowl.

For the most part, though, The Will To Win is a unique collectors item rather than a critical resource about the 1925 Crimson Tide team. For one, it only concerns itself with the 1926 Rose Bowl and only mentions the team's undefeated regular season in passing. In this respect The Will To Win was a precursor to the title game commemorative publications that are now ubiquitous following a team's winning the national championship.

Most of the images in The Will To Win, particularly those of the game itself, have been reproduced in various publications since and will be familiar to most Alabama fans. Of perhaps the greatest value are the captions which often identify various individuals in the photographs which have been left out of later copies (particularly online).

There are some great details to be found though. At a stop in Boligee, AL on the way back to Tuscaloosa, the team was presented with "eleven prize-winning turkeys." And the term "national champion" isn't used to describe the victory, instead it is the "East-West" championship.

While Pickens later produced a similar publication in the wake of the Tide's win over Washington State in the 1931 Rose Bowl, it would be a full 20 years before the first volume outlining the history of the team would be written, Alabama's Crimson Tide. The popularity of books about Alabama football are today shows that ever-entrepreneurial Pickens was certainly ahead of his time when he published The Will To Win.