In my preview of the Ole Miss offense I talked a great deal about how effective they are at running the inverted veer. However, against Alabama, it was anything but effective, as the Tide seemed to be keyed in on it from the very beginning. The most notable example of this is on the safety.

After a great punt by Cody Mandell the Ole Miss offense was pinned at their own one yard line. The play occurs at the 5:55 mark of the fourth quarter, and begins at 0:34 of the VIDEO.

Ole Miss comes out with four wide receivers, in a 2X2 formation. The quarterback is in shotgun and the running back is lined up to the QB's right. Alabama is in a 4-2-5 nickel formation, with two high safeties. The play is an inverted veer to the left. 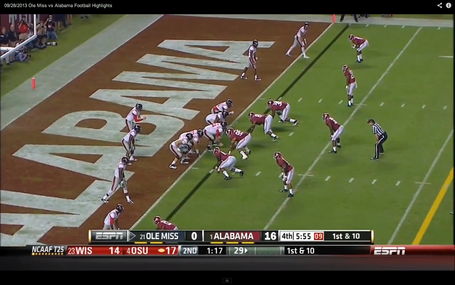 CJ Mosley said after the game that he gave right defensive end Denzel Devall a force call, making Bo Wallace keep the football. At the snap we see this play out ... Devall takes a wide angle, planting himself right in the running back's path, should Wallace have given him the ball. 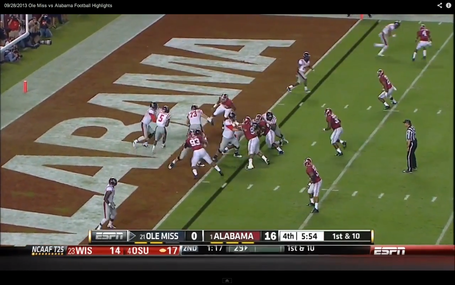 As expected Wallace decides to keep it, and heads for the area that Devall vacated ... just as the QB is taught to do. But Mosley knows this too, and he scrapes down to that area, blowing up the play. 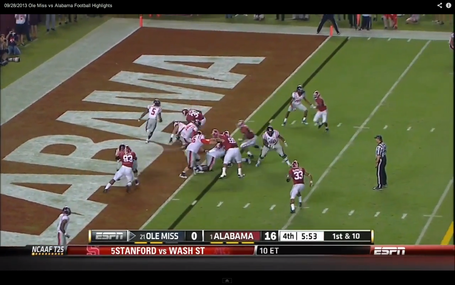 Read option plays are tough to defend, but it can be done with the proper calls, discipline, and execution, especially if the defense fails to execute all of their blocks. In this play we see how Alabama combined a force call and a scraping defender to stop the inverted veer, something they did frequently throughout the game.