So far this season the Kentucky offense has sputtered, ranking 71st in the FBS in both the running game and the passing game. Lets take a closer look at what we'll see on Saturday

Share All sharing options for: Preview: The Kentucky Offense

Kentucky runs a no huddle, spread offense, with varying degrees of tempo. In this respect they’re similar to Texas A&M and Ole Miss, but that’s where the comparisons pretty much end.

Through the first four games Kentucky used a two quarterback system, with Jalen Whitlow (a dual threat QB) sharing time with Maxwell Smith (a traditional drop back passer). But last week against South Carolina Whitlow played the entire game, performing quite well. So judging by this and Mark Stoops’ post-game comments, it’s reasonable to assume that we will not being seeing much of Maxwell Smith on Saturday. Whitlow is an Alabama native who attended Prattville High School, where he was teammates with Alabama freshman standout OJ Howard. He’s your typical dual threat QB, who’s both mobile and proficient in the short passing game, but will struggle when asked to stretch the field vertically. So staying ahead of the chains and avoiding long yardage situations is a must for the Wildcats, and if they fail to do this it’ll be a long night for them.

To Kentucky’s credit they’ve surrounded Whitlow with talented skill position players, although most of them are unseasoned. Freshman Jojo Kemp has been their top back so far, averaging 6.8 yards per carry on 33 attempts. He’ll split time with senior Raymond Sanders (4.8 YPC). These two backs and Whitlow (Kentucky’s leading rusher) form a talented trio, one that will give Alabama trouble if they’re not sound in their run fill responsibilities. You can expect some read option, but mostly we’ll be seeing more traditional zone running plays for the backs and QB power and draw plays for Whitlow. Finally, Darrell Warren will see some playing time at fullback and H-back, functioning as a lead blocker.

In the passing game, junior college transfer Javess Blue is their top target, typically lining up at the Z position. So far this year he has amassed 275 yards on 22 catches (12.5 yards per reception). Freshman Alexander Montgomery has developed into a nice number two target for Whitlow. He hasn’t seen all that many targets this year, but as he becomes more familiar with the offense that will change. Montgomery, for the most part, lines up in the slot. Finally, their most versatile player is another freshman, Ryan Timmons. Timmons is listed as a running back, but he will line up both in the backfield and in the slot. They use him in a similar manner to how they used Randall Cobb, and how Florida used Percy Harvin. Timmons, who’s elusive as a runner, has been the team’s second leading receiver so far this year.

The offensive line struggled early, but they’ve played better in recent weeks and Alabama should expect a competitive contest in the trenches.

Without much hope of stretching the field vertically, Kentucky’s number one goal on offense is to get their playmakers the ball in space, near the line of scrimmage. They attempt to do this in a variety of ways, and we'll take a look at some examples.

Rather than traditional, slower developing screen plays, Kentucky prefers swing screens to their running backs. This allows them to catch the ball on the run and turn upfield quickly, placing a premium on the wide receivers to hold their blocks on the edges. Lets take a look at an example. The play begins at the 1:29 mark of the second quarter and at 0:50:25 of the VIDEO. Here's my sketch of the play: 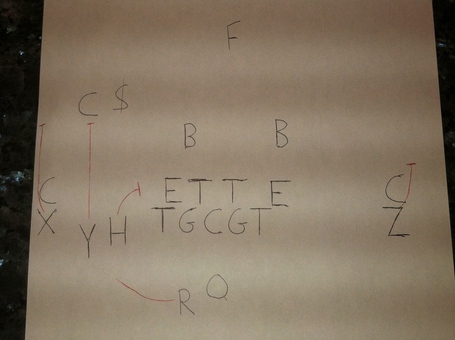 Kentucky is in a four wide receiver set, with trips to the left side. The quarterback (in this case, Smith) is in the shotgun, with the running back, Raymond Sanders, lined up to his left. Florida is in their 4-2-5 nickel package, with the strong safety moving down over the H-receiver. The play is a swing screen to the left. 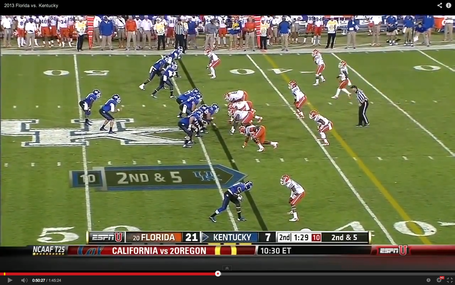 The key block is made by the H-receiver, who's job is to seal over the play-side backer and prevent him from getting out wide. The X and Y start upfield before finding someone to engage. The QB delivers the ball to the running back once he has already turned upfield and from there it's on him to make a play in space. 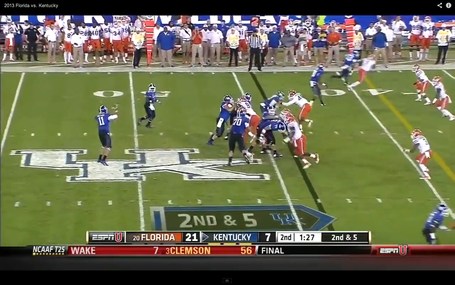 The H sets his block, as do the X and Y. The QB makes a run throw to Sanders and even though a Florida defender comes free Sanders makes him miss and picks up a nice gain. The Alabama defenders on the outside must shed their blocks and be disciplined in space. The linemen and backers also must pursue the play, something at which Alabama is quite good.

I mentioned earlier that Kentucky finds a variety of ways to get Ryan Timmons the ball, both in the air and on the ground. One way they do this is with a fly sweep. The only wrinkle here is that, rather than hand the ball off, the QB actually flips it forward to the runner, both to increase speed and because it's safer ... if the ball is dropped it goes as an incomplete pass, rather than a fumble. An example of this occurs at the 2:32 mark of the first quarter and at 0:20:40 of the VIDEO. Here's my sketch of the play: 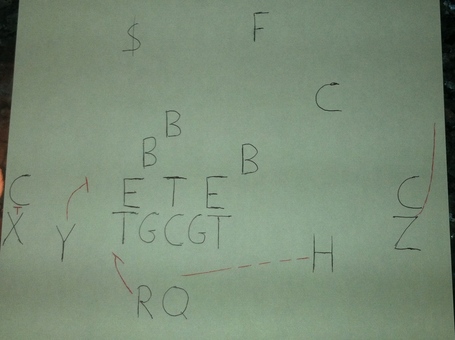 Kentucky is in a 2X2 formation, with one running back lined up to the quarterbacks left. Florida is in their 3-3-5 nickel formation, which has a lot of moving parts before the snap. It's third and long, so Florida is guessing pass and they're trying to make Kentucky's pre-snap protection calls more difficult. The play is a fly sweep to the left. 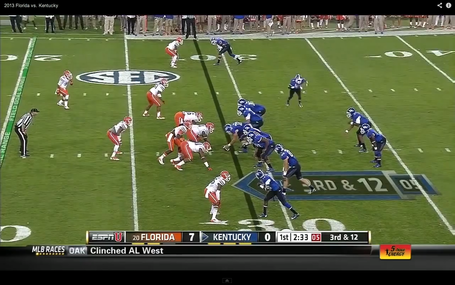 Just before the snap the H, Ryan Timmons, comes in motion from right to left, allowing him to get a running start before Whitlow pitches him the ball. The five offensive linemen take care of the three defensive linemen and the back-side backer. The X blocks the boundary corner, leaving the Y and the R to block the two backers that are flowing toward the play-side. Timmons' target point is outside of the Y. 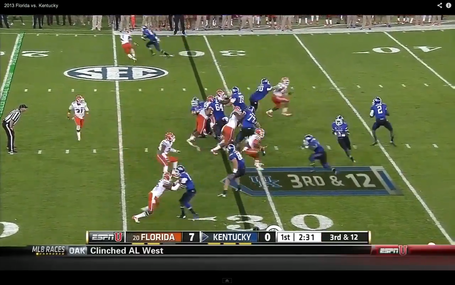 Both blocks are executed perfectly. The R cuts his man (a controversial, but legal technique) and the Y blocks his man, sealing off the back-side. The play goes for a nice gain, and I would expect Kentucky to run this a couple of times, especially on earlier downs. 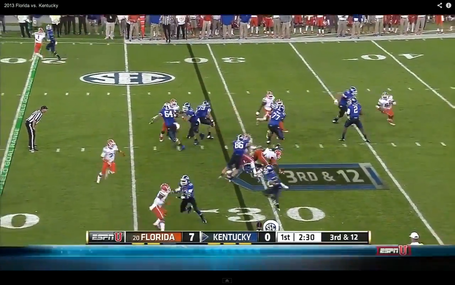 Timmons will also be motioned into the backfield from time to time and run a normal zone play, such as this one that begins at 0:58:09 of the VIDEO.

Finally, you can expect some trick plays from Kentucky on Saturday, maybe even more frequently than usual because of the talent gap. Take a look at the play that occurs at the 13:53 mark of the third quarter and at 0:58:38 of the VIDEO. Here's my sketch of the play: 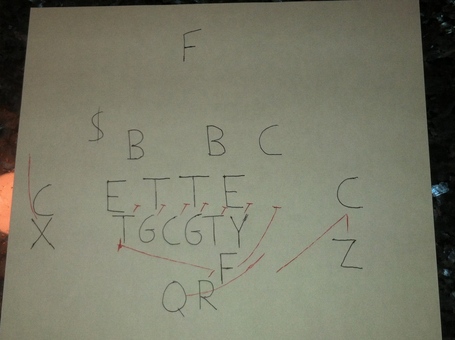 On third and short Kentucky chooses to go with 21 personnel ... a running back, a fullback, and a tight end, to go along with two wide receivers. The Z-receiver's split is tight to the formation. Florida chooses to stay with their 4-2-5 nickel package, but brings eight men into the box. The play is a wide receiver reverse to the left. 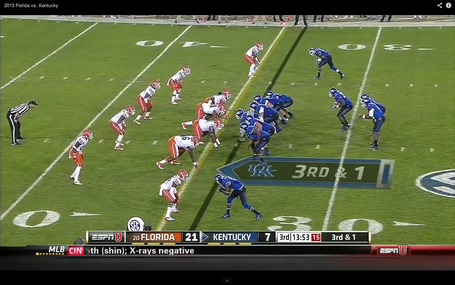 All five offensive linemen and the tight end zone block to the right, while the fullback seems to act as a lead blocker for the quarterback. On the surface it looks like an outside zone to the right for the QB. But the running back darts to the left, meaning one of two things ... either he's a decoy (teams will do this as a type of counter running play) or the play is coming back to the left. The Z-receiver, who initially started to block the corner who lined up across from him, changes direction and comes back to the left for the reverse exchange. 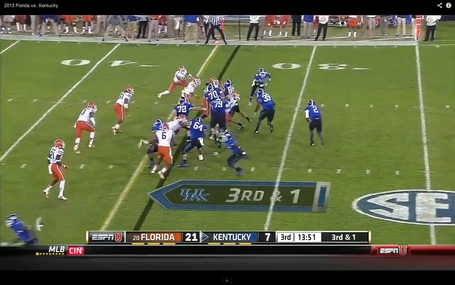 Unfortunately for Kentucky, Florida's front stayed disciplined instead of over-pursuing, and Javess Blue has nowhere to go. The play ends with a tackle for loss. Alabama's front will have to stay equally disciplined on Saturday to contend with Kentucky's misdirection running plays. 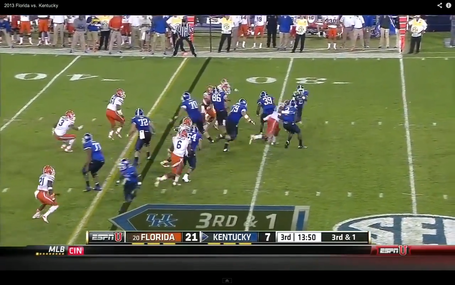 Lastly, Kentucky is almost certain to try to take advantage of Whitlow's athleticism in creative ways. An example of this occurs at the 4:25 mark of the third quarter and at 1:11:56 of the VIDEO. Here's my sketch of the play: 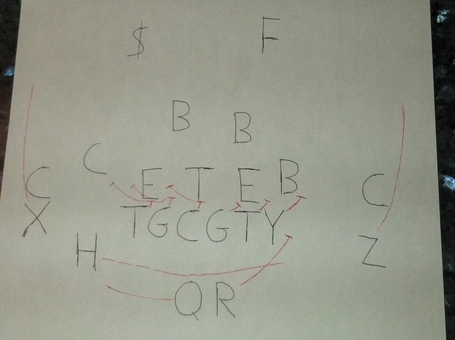 Kentucky is in 11 personnel ... a running back, a tight end, and three wide receivers (two to the left). Florida is in their 3-3-5 nickel package, with the backers shifted over toward the strong-side of the offensive formation. The play is a throwback to the QB. 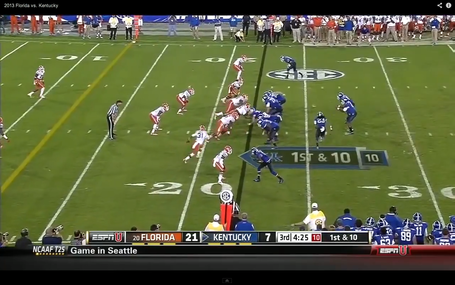 At the snap the H-receiver, Daryl Collins, comes in motion and Whitlow hands him the ball. The tight end, play-side tackle, and play-side guard all zone block to the right while the center, back-side guard, and back-side tackle all cut block. The running back acts as a lead blocker for Collins. Whitlow also throws a block on a back-side defender trying to chase down the play. 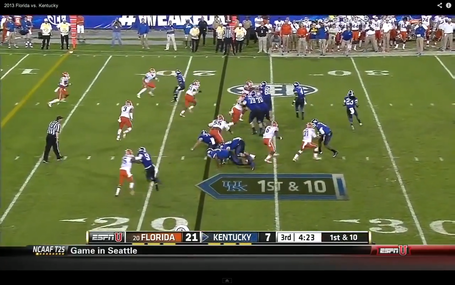 But Whitlow then leaks out to the left, and the three linemen who cut block get to their feet and proceed to act as a convoy for Whitlow. Florida has over-pursued the play and there is no one back to the left. If Collins can get the ball to Whitlow it'll be a Kentucky touchdown. Unfortunately Collins hesitates for just a moment, which is more than enough time for the Florida defenders to close in and blow up the play. 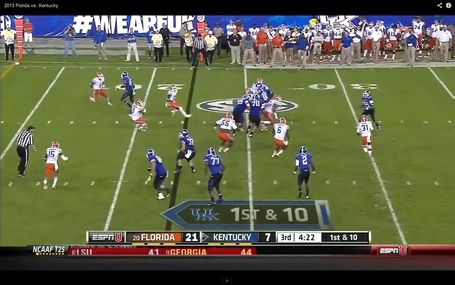 Kentucky's strategy is pretty clear ... get the ball in the hands of their best playmakers and let them take over the game. Florida was more than up to the challenge, but even they were fortunate on the final play we reviewed. The Alabama defenders must stay disciplined, and avoid over-pursuing plays. If they fail to do this Kentucky could hit a couple huge plays on offense and hang around in the game far longer than any of us expect.