Breaking down who to look out for while the Tide has the ball on Saturday, and what to expect from the Hogs

This Saturday evening, Alabama will welcome the Hogs of Arkansas to Tuscaloosa. The Razorbacks are in the midst of a dizzying stretch of quality opponents, and that’s not even counting the loss in New Jersey to a middling Rutgers team. Starting Sept 28, Arkansas has played A&M, gone to Florida, and hosted South Carolina, all losses in consecutive weeks. The Hogs reward, a trip to Tuscaloosa to play against an Alabama offense that is using a lightened stretch of schedule to coalesce. After this week, Arkansas will finally be taking its first bye of the season, so it’s safe to say that at this point, the Hogs are pretty well battered. They showed that fatigue last week giving up a truckload of points to South Carolina, who was until then having problems of its own, in a 52-7 smack down.

Statistically, Arkansas’s defense does not look too bad. They are ranked 44th in the FBS in total defense, giving up 367.7 yards per game. When breaking that down further, they are not horrible in run or pass defense, giving up fairly balanced yardage to both, and ranking 49th in rushing D (146 y/g) and 53rd in passing D (221 y/g). When digging deeper, you do find a few anomalies, such a passing completion percentage allowed, at 62.5%, good for 91st in FBS, and passing TDs allowed, 15 against only 4 interceptions, which is tied for 114th out of 125 FBS teams.

Those numbers completely broke down last week in Fayetteville against the Gamecocks. The Arkansas D, likely because of the aforementioned brutal stretch, was torched for 537 yards and 277 of those came on the ground. Mike Davis had a great day busting through arm tackles for 128 yards on 19 carries.

A more concerning issue for the Razorbacks will be filling in for injured tackle Robert Thomas. Thomas broke his leg last Saturday against USC, and will miss the rest of his senior season with the injury. The 6-3, 325 tackle has been a force in the trenches for the Hogs this season, and will be sorely missed. He will reappear next year on NFL draft boards though, as pro scouts have been on him for some time. 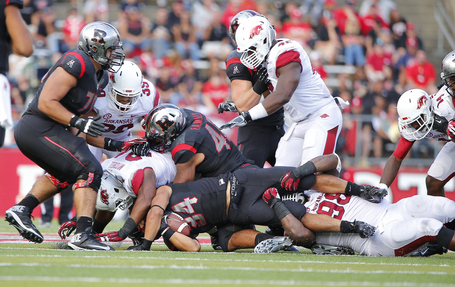 The D Line is definitely the strength of this unit, even without Thomas there to plug the run. But without him, the depth at tackle is hurting, and the potential for teams to run the ball and drain the game becomes an issue. Filling in for Thomas on running downs will be sophomore DeMarcus Hodge (#93), a giant himself at 6-1 335. Hodge does not move near as well as Thomas did though, so even with the wide frame, I think success can be found running by him. On passing downs, look for Darius Philon (91) to man one of the two tackle positions. The 6-3 290 redshirt freshman has been a star in the making this season, already racking up 3 sacks on limited snaps. Look for Philon to be a household name in a year or two. If the name already rings a bell, it’s probably because Philon was a former Alabama commitment, from Vigor in Mobile, who decommitted from the Tide before ultimately signing with the Hogs. 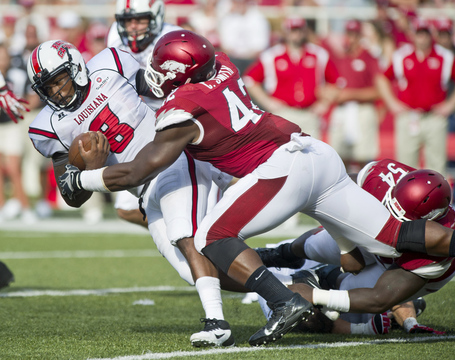 The other two names to keep in mind this weekend are Chris Smith and Trey Flowers, at the two DE spots. These two are the key pass rushers for the Hogs base 4-3 defense. Smith (42) already has 6 sacks this season, tied for 7th nationally, and Flowers (86) has 4, with 8.5 total tackles for loss. These two live in the backfield, and it will take a solid day from both Cyrus and either Shep or Grant Hill at RT to keep them at bay.

In the back end, Tevin Mitchel(8) has shown some good things at corner, but he hasn’t quite put it together yet, and on the other side, Carroll Washington (21) made his first start last week after transferring from junior college over the offseason. While both may develop well in time, right now they are exploitable, and there will be opportunities for the Tide’s experienced wideouts to get open.

Here we will look at one of the blitz packages from Arkansas D coordinator Chris Ash: 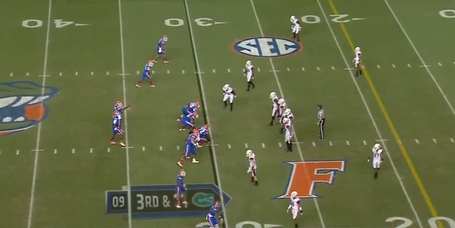 Here you can see that the Arkansas is in a nickel personnel package, with Florida spread out on a third and long early in the game. The front 6 for the Hogs, save for the two DEs, all stand well off the line, trying to confuse the OL blocking scheme. 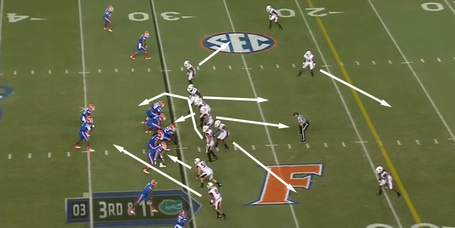 Closer to the snap, the four that were standing back all push up, as well as the playside slot and backside corners, both showing blitz. At this point it looks like an all out blitz, but as I’ve given the play away, you can see that this is a planned backside (bottom of the screen) rush including the backside corner Tevin Mitchel (8). 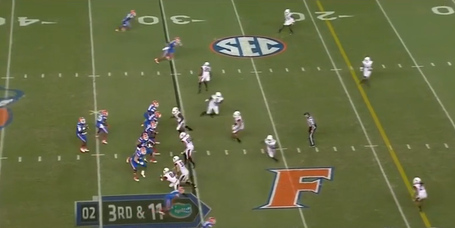 Here you can see the play beginning, the playside slot corner, playside DE, Mike, and Will, all who were showing blitz previously, back off into a zone coverage. 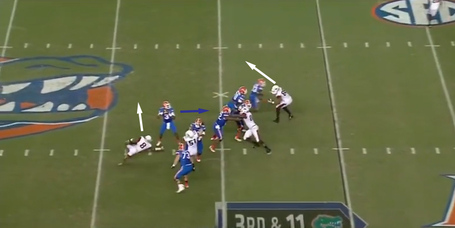 Here you see Mitchel (8), with his quickness around the edge, is able to force UF QB Tyler Murphy up in the pocket. Trey Flowers (86), who was lined up as the backside DT, stunted to the playside and would most likely be able to contain Murphy if he wanted to scramble to that side. 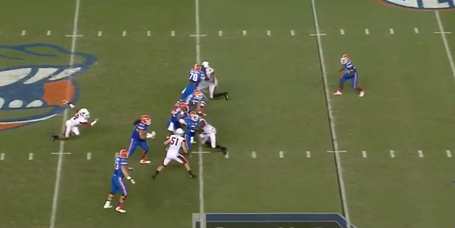 Murphy is quickly corralled by the two leftover rushers. If he wasn’t so strong, it would have been a sack for Brandon Lewis (89). He was able to force a pass out, though it fell incomplete, forcing a Florida field goal attempt that was ultimately blocked.

Arkansas will be fielding a battered team Saturday, and a defense without a key cog in Robert Thomas. I expect the Hogs to come out swinging, but if a few things start to go south, don’t be surprised to see them start the bye week a bit early.