Arkansas runs a pro-style offense, one that will almost certainly remind you of Alabama. They’re a run first team (mostly zone blocking) that uses play action to stretch the field, and they operate predominantly out of 21, 12, 11, and 22 personnel.

Share All sharing options for: Preview: The Arkansas Offense

They’re led by sophomore quarterback Brandon Allen, who you may remember as the guy who started (and split time) at quarterback last year against Alabama, because Tyler Wilson was out with a concussion. Allen, who struggled in limited duty last year, has not fared all that much better this year, especially in more recent games. On the season he has completed only 48.1 percent of his passes, for a paltry 6.5 yards per attempt. He has tossed eight touchdown passes to go along with five interceptions. Allen is not a threat to run the ball, and is purely a drop-back passer.

The strength of this Arkansas offense is their running game, which is a legitimate threat to even the stoutest SEC defenses. True freshman running back Alex Collins, the prize of Arkansas’s most recent recruiting class, leads the team in carries and has performed quite well. He has rushed for 720 yards on 123 carries (5.9 YPC), and shows off an excellent combination of power and burst. Backing him up will be sophomore running back Jonathan Williams, who has also been excellent through the first half of the season, averaging 6.5 yards per carry on 87 rushing attempts. Fullback Kiero Smith is a solid lead blocker, and will get some carries (from the halfback position) in short yardage situations.

Tasked with opening up running lanes for these two backs will be a solid offensive line, led by senior and all SEC preseason first team selection Travis Swanson. Flanking Swanson at the guard positions are two true freshmen, Denver Kirkland and Dan Skipper. Brey Cook and David Hurd are the tackles. Together they form an impressive group, one that succeeded in pushing around Florida’s front seven for extended periods of time a couple of weeks ago.

Arkansas also has some talented pass catchers, although they’ve been underutilized due to Allen’s struggles and Arkansas’s run first mentality. Senior Javontee Herndon is their top target on the outside, and has performed well this year, despite not yet having one really big day. On the year he has 288 yards on 18 catches, good for an average of 16 yards per reception. Sophomore slot receiver Keon Hatcher has also performed well, and you can expect Arkansas to move him around and look to get him the ball in space, both as a pass catcher and a runner on jet sweeps. Finally, true freshman tight-end Hunter Henry, who was the fourth rated player at his position in the country per Rivals and was recruited pretty heavily by Alabama, is off to an excellent start this year. Henry, who missed a game earlier in the year due to injury and was limited last week (but is expected to be back at full strength for Saturday’s game), has still managed 276 receiving yards on 14 catches on the season.

Similar to the Alabama offense, Arkansas’s favorite running play is the Inside Zone. They’ll run this play both out of single-back and two back formations, often in double tight-end sets. Sound familiar? I discussed the Inside Zone in detail HERE, and you can expect to see some variation of this quite frequently on Saturday.

One little wrinkle that Arkansas likes to include in their running game is wide receiver motion immediately prior to the snap. The goal here is to get the defense out of their assigned gaps, creating creases for the ball carrier. If the play-caller thinks the defense is widening out, respecting the fly sweep, he’ll dial up an inside run. Conversely, if he thinks the defense is sitting inside, protecting against the inside run, he’ll call for the give to the wide receiver. It’s always important to remember how different plays, and groups of plays, compliment each other.

First, lets check out an example where it’s a simple Inside Zone play. The play begins at the 8:01 mark of the second quarter and at 0:43:43 of the VIDEO. Here’s my sketch of the play: 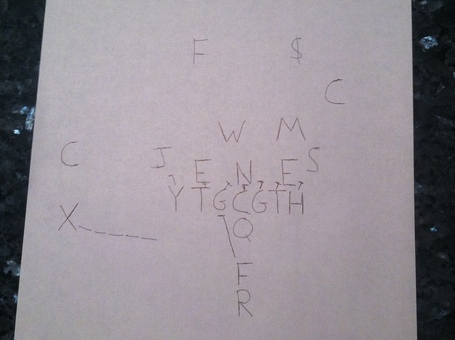 Arkansas is in an I-formation, with two tight-ends, one on either side of the formation. They have one wide receiver, split out to left. Florida counters with a standard 3-4 formation. 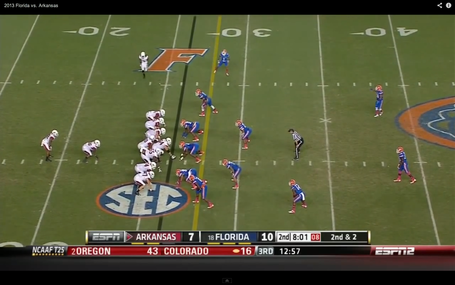 Just before the snap the wide receiver comes in motion. Keep in mind, there’s no option here, it’s a give to the running back no matter what the defense does. But the key is for the give to the running back to occur at the same time that the wide receiver passes behind the quarterback, so the defense doesn’t know until the last second who is getting the ball. 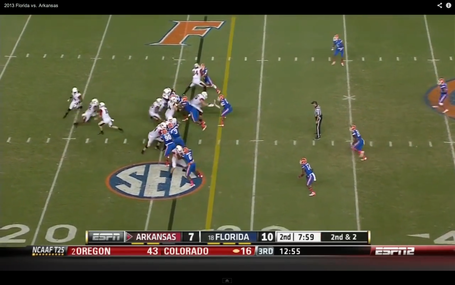 Allen executes the exchange well, but the Florida defense doesn’t widen out and the Arkansas offensive line loses at the point of attack. The result is very little running room for Jonathan Williams and a minimal gain.

Now lets see what happens when Arkansas runs the fly-sweep out of a similar look. The play begins at the 5:53 mark of the first quarter and at 0:20:54 of the VIDEO. Here’s my sketch of the play: 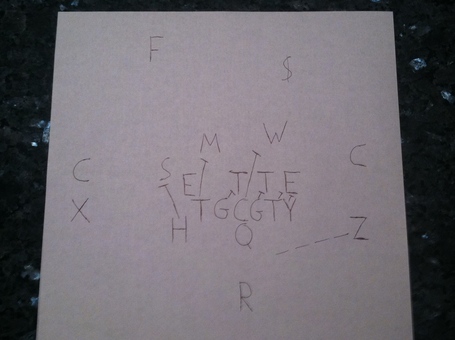 Arkansas is in a single-back formation, with the two tight-ends, one on either side of the formation. They have two wide receivers, one on each side. Florida is in their base 4-3 defense. 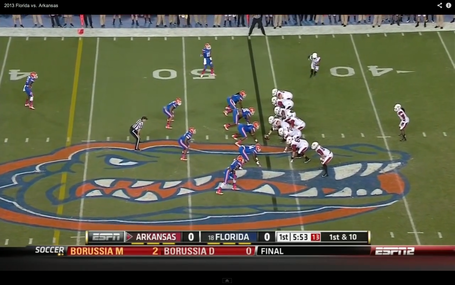 Just before the snap the Z-receiver comes in motion, running closer to the line of scrimmage than in the example we saw earlier. That’s a tip-off that it’s a fly-sweep, but it’s not a sure thing and a defense can get in trouble making those sorts of assumptions. 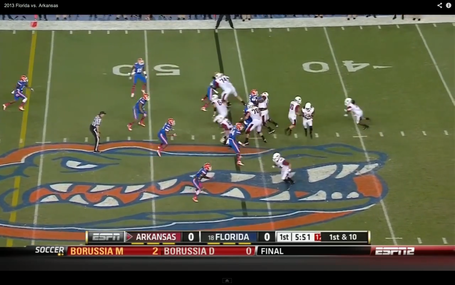 Sure enough it is a fly-sweep, one that both fools the defense and is blocked perfectly. The Y and back-side offensive tackle double team the back-side end. The back-side offensive guard blocks the back-side defensive tackle. The play-side offensive guard blocks the play-side defensive tackle. All of these linemen succeed in pushing their man out of the play. The center moves to the second level to block the WILL backer and the play-side tackle moves to the second level to block the MIKE backer. Both of these backers stayed inside, initially, and by the time they realize it’s a fly-sweep their blockers are waiting for them. The SAM, who’s responsibility is to contain the edge, moves outside and the H jumps out and pushes him further to the sideline. The play-side end is left unblocked. 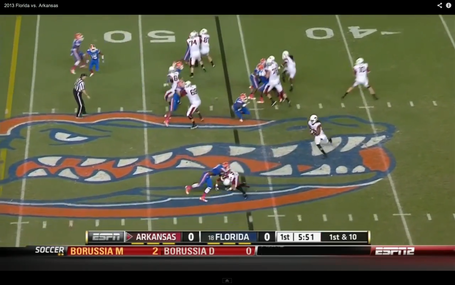 The unblocked end is fooled, initially thinking it’s a run up the middle. By the time he realizes that the wide receiver has the ball it’s too late. The ball carrier runs directly to the spot vacated by the end, right between the blocks thrown by the H and play-side tackle, picking up a nice gain.

Once Arkansas establishes these running plays, they’ll dial up a play-action off of a similar look. One example of this is a double play-action fullback wheel. The play begins at the 2:47 mark of the second quarter and at 0:53:11 of the VIDEO. Here’s my sketch of the play: 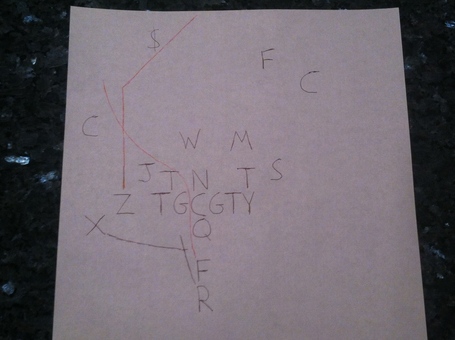 Arkansas is in an I-formation with one tight-end to the right of the formation and two receivers stacked to the left. Florida is in a standard 3-4 formation. 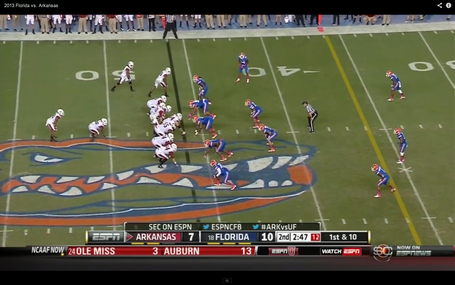 In this case, there is no pre-snap motion … instead the X-receiver only starts moving once the ball is snapped. Allen fakes handing it off to the running back … 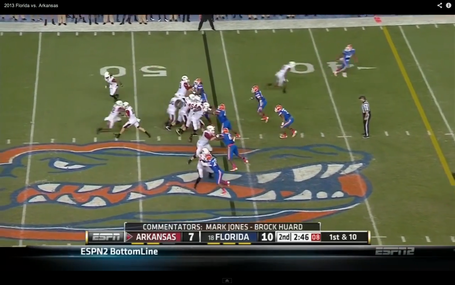 … and then fakes handing it off to the wide receiver. 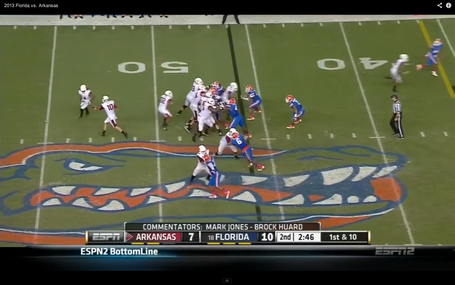 Meanwhile, the Z-receiver runs a post route, drawing the defense to the middle of the field. The fullback, who seemed to just be a blocker at the beginning of the play, leaks out and runs up the left sideline, where he is wide open. The play works perfectly until Allen makes a poor throw and the result is an incomplete pass. 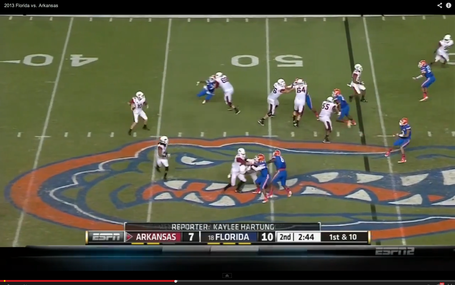 The Alabama defense must be wary of all the possibilities out of this look, and not over-pursue any aspect of the play (running back, fly-sweep, play-action, etc).

Because of Allen’s shortcomings as a passer at this point in his college career, the play-action passing game is pretty much the only way that Arkansas can reasonably expect to stretch the field. Look for them to take short yardage situations as an opportunity to throw the ball down the field, because the defense is likely to be selling out for the run. An example of this begins at the 2:54 mark of the first quarter and at 0:24:27 of the VIDEO. Here’s my sketch of the play: 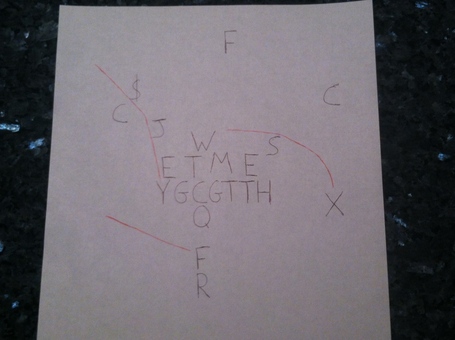 Arkansas’s offensive line is unbalanced to the left, with the Y in the spot normally occupied by the left tackle. Additionally, Arkansas has a second tight-end to the right of the formation, and a single receiver to that side as well. Behind Allen they’re in an I-formation. Florida is in a 3-4, with both the MIKE and WILL backers at the line of scrimmage, preparing to defend against a running play.

The first thing the defense must recognize is that the player in the left tackle’s spot is an eligible receiver. If they don’t do this, they’ve lost the play before it has even begun. Also, because the formation is overloaded to the right, the defense has to shift over to that side. 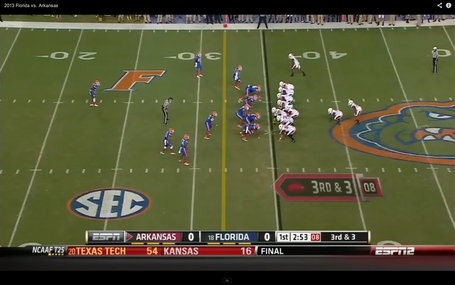 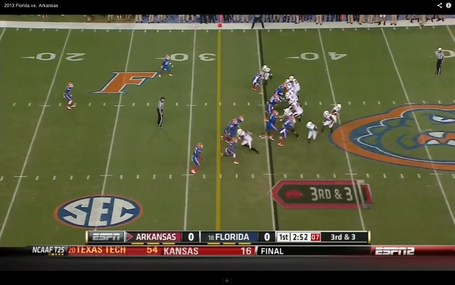 The defense reacts to the play-action fake by moving downhill to stop the run, allowing the tight-end to slip behind the defense. Allen delivers a good throw and the result is a huge gain for the offense. 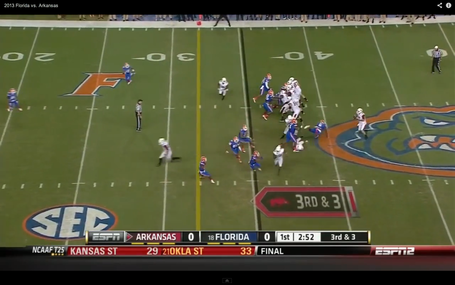 Like most teams, Arkansas will also try to hit deep play-action passes on first downs. An example of this begins at the 6:54 mark of the second quarter and at 0:45:13 of the VIDEO. Here’s my sketch of the play. 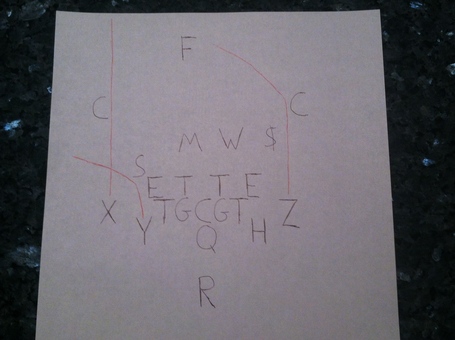 Arkansas is in a single-back formation, with two tight-ends, one on either side of the formation. There are two receivers, one on each side, both tight to the formation. This is a classic play-action look for pro-style offenses, including Alabama. Florida is in their base 4-3 defense, with the strong safety having moved down into the box. 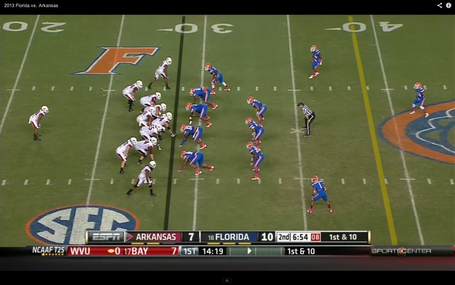 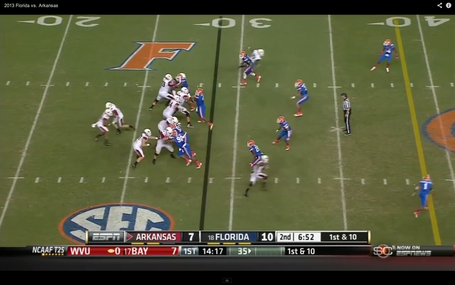 The linebackers bite on the play-action and someone is probably going to be open downfield, but pressure by the Florida defensive line blows up the play and forces Allen to throw the ball away. 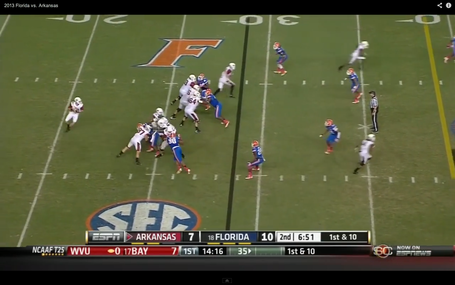 If this play looks familiar to you it’s because this is an Alabama favorite. Check out the 1:23:17 mark of this VIDEO. You may also remember the flea-flicker against Texas A&M. Like I mentioned above, in many ways this offense is very similar to Alabama’s.

Alabama is more talented than Arkansas, but make no mistake about it, both of the Razorback’s running backs are very talented and the offensive line is playing well. Arkansas’s only chance in this game is to control the line of scrimmage and sustain long drives via the run. If they can do this, they should be able to create opportunities down the field, off the play-action passing game. But if Alabama can bottle up the running game and also put some points on the board early, the burden will be placed on Brandon Allen and the game will be over early.