A look ahead to what the Bama offense will be lined up against on Saturday afternoon in Tuscaloosa.

Share All sharing options for: Previewing the Tennessee Volunteer Defense

The next along Bama’s Murderer’s Row (/sarcasm) is Tennessee. Alabama’s schedule has lightened up significantly after VT, A&M, and Ole Miss, but that luxury of tune up games has not been the case for the Vols. Thus far they have played Oregon, Florida, Georgia, and South Carolina, all ranked in the top 20 at the time of playing. Of course, Georgia and Florida have somewhat fallen off the radar, and the SEC East as a whole is not looking like the juggernaut once thought, but that doesn’t mean it’s been a cakewalk either.

This game will prove as a much more difficult challenge than either of Georgia State, Kentucky, or Arkansas for McCarron and the Tide offense, although we are not talking about an elite defense yet either. The Vols have struggled this season, but seemingly have turned a corner, and are definitely playing with a much improved confidence level than previous iterations of the team. 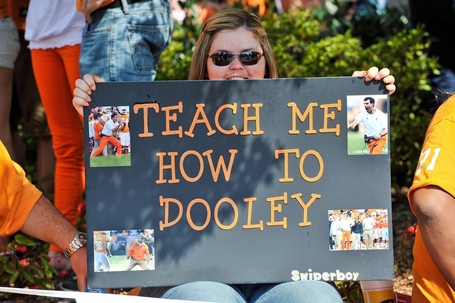 This Vols defense was a serious mess last year. After a desperate Derek Dooley hired Sal Sunseri as D-Coordinator in the offseason before the 2012 year, hopes were high that Sal could bring a small part of the success that Kirby Smart had at Alabama to a defense that had been serviceable, but not great. As crazy as it sounds, the Vols were ranked 27th in the country in total defense (340 yards/game) in 2011 before Sunseri arrived, not too shabby considering what came next. When Sal showed up, as expected, he brought along the familiar 3-4 defense that has been so successful in Tuscaloosa with him. Unfortunately for Sunseri, the scheme was a failure, and the defense ranked as one of the worst in UT history and one of the worst (110th) in the FBS last season, giving up an astronomical 471.3 yards/game.

Fast forward to this season, after the 3-4 blip last year, the Vols switched back to the 4-3 that the players are more comfortable with under new D-Coordinator John Jancek. Jancek followed new HC Butch Jones from Cincinnati, where he fielded a pretty good defense, given the Big East circumstances. So far, the defense looks like a different team, and that is partially because it is getting contributions from several newcomers. This team is giving up 411 yards of offense a game, good for 76th in the FBS. Take out Oregon’s ungodly 687 yards, and that number moves to 366 y/g, which would rank UT at 37th, again, a huge improvement over last year. 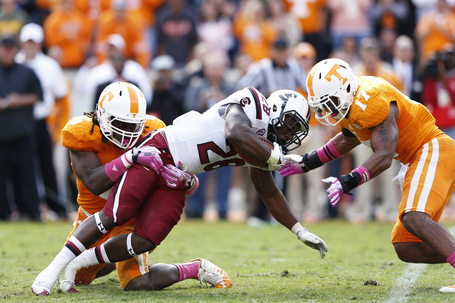 The Vols front 7 is an experienced group led by junior LB AJ Johnson (number 45). Johnson, 6-2 243, leads the team with 55 tackles this season, and is second in the SEC over the past 2 seasons with 193 (if you are curious, 1st is Avery Williamson with 199, who you will remember from the Kentucky preview - - CJ Mosely has 165). Johnson flies all over the field in the mold of CJ Mosely, and you will likely hear his name more than any other Vol defenseman.

On the D Line, the opposing game plan must begin with locating big number 98, Daniel McCullers, who at 6-8 351, anchors that line and is surprisingly nimble for his size, evidenced by his 4.5 TFLs so far this season. Seniors Jacques Smith (55) and Corey Miller (80) bookend the line at DE, and have been consistent, but the story at DE will be the newcomers. Although a Senior, Marlon Walls (58), has been somewhat of a revelation this season, in his first one getting regular snaps. He just gets enough plays to lead the team in sacks with 4.5, and had a coming out party against Conner Shaw with 2.5. Also be on the lookout for freshman Corey Vereen (50). He made his debut against Florida and recorded a sack against Aaron Murray. Vereen was a 4 star out of Florida, where he recorded 15 sacks his senior season and 16 his junior season. 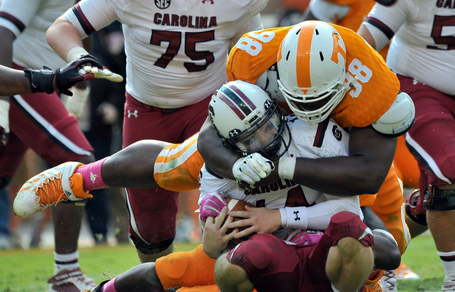 Even with McCullers and company blocking up lanes, Mike Davis went for 137 on 21 against this defense, and after Marshall went down for UGA, Freshman J.J. Green had 129 yards on only 17 carries, a 7.6 per carry average. So, as usual, expect Alabama to try to come out and establish a run game on this defense, and then use play action passes to blow the top off. So how, you are asking, did the Vols manage to take the Dwags to overtime and beat Cocky giving up rush yardage like that? Well the Passing numbers for both Murray (196) and Shaw (161) were less than you’d expect. In fact, Shaw was only 7 of 21 before getting hurt on Saturday. That allowed Tennessee to hang around late and make a push to try for the W. One they got, another was very close.

The names to know in the defensive backfield for UT are Brian Randolph (37), sophomore Safety who leads the team in interceptions with 3, and is second on the team in tackles with 46, and freshman Cam Sutton (23), a 6-1 180 corner who is green, but is holding up better and better against SEC competition. Sutton was a 3 star recruit from Jonesboro, GA who was also recruited by Auburn, Arkansas, Clemson, and Florida. Many times in the USCe game, Conner Shaw was either sacked via the dreaded “coverage sack” or was forced to scramble out of the pocket after not finding anyone. Without 11on11 film it’s impossible to know if Shaw was hesitant to throw to open receivers, or if the UT coverage was really that good, but given the history and propensity for Shaw to chuck the rock, I have to believe that the Gamecock WRs were having trouble finding space. 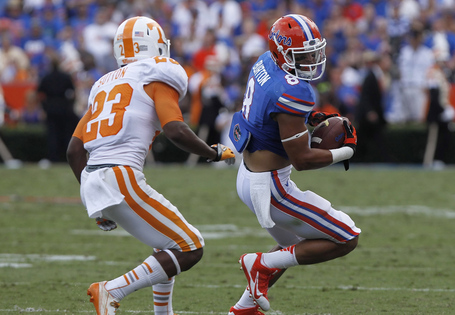 In film study, this defense has definitely been making strides. Despite the horrid numbers against the run, the problem for the Vols appears to be tackling, rather than being in the correct position. Mike Davis seemingly had to break a tackle every time he got to the line of scrimmage. Most of the time he did and reeled off a 10 yard run, but the fact that the Vols’ defenders are getting off blocks has to be encouraging for their coaches. Once they learn how to finish these tackles, I expect that this defense will once again be reminiscent of a traditional SEC D.

I’ll reveal a story from my youth for this one. I have mentioned on here before, embarrassingly, that I actually attended that big orange garbage truck worker’s convention of a school. Well in 2002, it was my first year up there, and I decided that I would attend the Alabama UT game that year with my girlfriend at the time. She was a big Bama fan because of me, so we both adorned our crimson finest, right in the heart of the beast, the UT student section. I was getting heckled something fierce for the entire game, but it was especially bad once Bama went up big (rare in those days – in fact UT had won 7 in a row in the series prior to this game).

I really think that had it not been for my girlfriend being there, it would have gotten REALLY bad. Anyway, after the game ended and Bama won 34-14, I was excited and cheering, when the guy right next to me did something unexpected. He took off his bright orange pullover and revealed a Bama shirt with none other than the Bear on the front. Now, looking back, one could be mad that he dare cover up the Bear with that awful color, but I tend to think of it as the ole coach was shielding the Orange from his heart. Anyway, at the time I was just excited to have another on our side, so we cheered to our unexpected and long awaited victory.