Tennessee tailback back Rajion Neal is hoping to play a bigger role against Alabama as a senior.

"This is a good game to put it all out there," Neal said after Tuesday's practice. "I wouldn't mind either outrushing everybody on the field and having a big game, or just knocking myself completely out of the game. I want to go out on one of those two notes. Either being carried off the field or have a crazy game."

Uh... What? When's the last time you heard a player say he wants to be the best out there or get knocked completely out of the game? I get what he's saying, but it does make me wonder how Neal might respond if he meets a lot of adversity early in the game.

The Vols have 12 sacks through seven games after recording just 17 a season ago, and defensive linemen are responsible for all of this season's sacks. Seven have come from the six seniors on Tennessee's defensive line, a veteran bunch that's not been the most productive group. Those six players entered the season with just 10 career sacks.

Marlon Walls, a fifth-year defensive end, is experiencing a final-year renaissance. He leads the team with 4.5 sacks after a 2.5-sack game against the Gamecocks after registering just one sack -- against Buffalo in 2011 -- in the first three years of his career. Walls missed the 2010 season after tearing his Achilles' tendon during preseason practice.

Gary Danielson: Key to Alabama-Tennessee is in the trenches| AL.com

"They've put a lot of work in and it's one thing for the coach to say, 'I can see improvement and you're getting closer,' It's another thing to have it end in a win," he said. "I give coach Jones a lot of credit. He walks a real small tightrope because Tennessee, like everybody else, they measure themselves for championships, not moral victories. But he can also lose the team by saying, 'Nothing but a win is acceptable.' I don't think they have a talented enough team to win a championship, but I think they have a talented enough team to compete now. Any game they go into, I don't think they're going to walk on the field and be embarrassed like they were early in the year.

"We weren't going to play Dee Liner," Saban said on his weekly radio show Thursday evening. "We've been coaching him and trying to develop him. Well we had him ready to play last week, but we didn't put him in the game, but we're probably going to have to play him in the game this week as a defensive lineman."

This was all part of Saban's spirited discussion of redshirt regulations.

"I hate this rule," Saban said. "If a guy plays in one play in one game, you cannot redshirt him. It has to be total abstinence from playing the whole season. I wish they'd make a rule where a player could play, like for a medical (redshirt), if you play in less than half of the games in the first half of the season, you can still get your year back. ... I wish they'd do the same thing for freshman."

I'm not really clear on this situation here. If Dee played his way into some playing time, that's one thing, but this talk about how we're "going to have to play him" is a bit confusing to me. I don't recall any of our major contributors going down, and the only role-player casualty I can think of is LaMichael Fanning. If the Fanning suspension was the catalyst for the move, I don't get it. Fanning only had 3 assisted tackles on the year, and his absence hardly necessitates burning a kid's redshirt, in my opinion.

With Bradley Sylve nursing a high-ankle sprain, Nick Saban said Cyrus Jones will likely get the start at 2:30 p.m. Satruday against Tennessee.

Jones is third on the depth chart behind Sylve and freshman Eddie Jackson, but he's impressed Saban in recent weeks. Jones had his second interception of the season Saturday against Arkansas. His first came in the end zone against Texas A&M.

I would love to know precisely what the deuce is going on with Eddie Jackson. He was a revelation at cornerback in the Ole Miss game, and has basically disappeared since. I had heard that he was battling an injury, but it seemed that he was playing on special teams last week. At this point, I have no idea what is keeping him out of the defensive backfield.

None of that complaining should be interpreted as a lack of faith in Cyrus Jones. Ever since the spring game, I have thought that he has had a chance to be pretty special, and his interception this past game (where he read a route and broke on the ball before the receiver even went into his break) was fantastic. That was the play that had Saban jumping and celebrating, and I wonder if that play alone was enough to earn Cyrus a start.

"The players obviously have better focus and discipline with what they're doing and more confidence in it," Saban said. "I think there's a couple of penalties that could have been called in the game. We have officials at practice every day and we try to emphasize to do things the right way and have good discipline and attention to detail so you don't get penalties."

It had been 31 years since the Tide last had a penalty-free game before last week's game against Arkansas. It's nice to see the team is approaching the standard that has been set in the last few years, but they'll need a couple more super-clean games in order to reach those heights.

Alabama had an overall score of 86 — above the national average of 82 for the years 2003-06. It also beat the 85 score it achieved in last year’s release.

The Crimson Tide had seven teams with perfect scores including women's golf, soccer, softball, tennis and volleyball along with men's golf and swimming.

The Alabama football team had a score of 73 to rank seventh in the SEC. That's down slightly from the all-time high of 75 it had the previous year, but significantly higher from the 39 it scored on the first survey in 1998.

Tennessee Hate of the Day

My general disregard for Tennessee is well documented. That being said, while I don''t share Bammer's antipathy for the Vols, I do hate their colors. I'll be at the game tomorrow, and I'm hoping more than a few Vols get a chance to be reminded that they are wearing the colors of a sanitation worker. 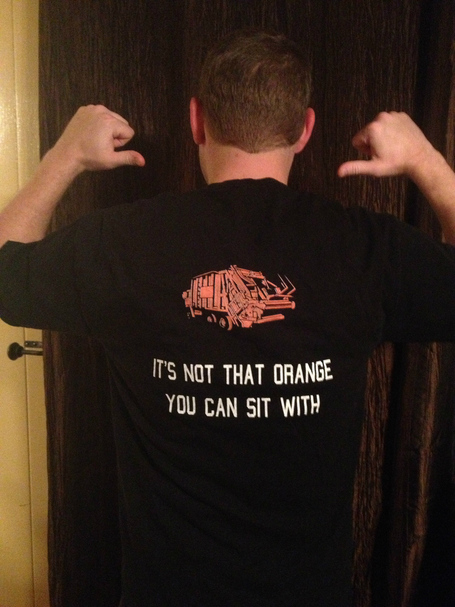 If you're interested, this t-shirt (and others) can be purchased here.