Little light on message board meltdowns this week as most all the top tier teams took care of business against overmatched opponents. Even still, we think you will find some amusement in this week's submissions. As always, this post is not suitable for work or small children in any form or fashion. The language below is rude, offensive, etc... y'all know the drill. If you don't like cussin' and the like, read no further. You have been warned.

Today we focus on Mizzou, Tennessee, and Nebraska. Mizzou fans seem particularly perturbed by the poor kicker, Ryan Pflugner Andrew Baggett, who missed a chip shot field goal that would have continued the game. While I understand the fans' disappointment, people really can suck sometimes. The Vols fans didn't really expect a win this week but watching the crimson bus run over them time after time still causes all manner of alcohol induced depression and paranoia. Oh, and Nebraska lost to Minnesota. That was fun. By the way, Simon and Garfunkel seem to be a thing for college football fans now. Enjoy. 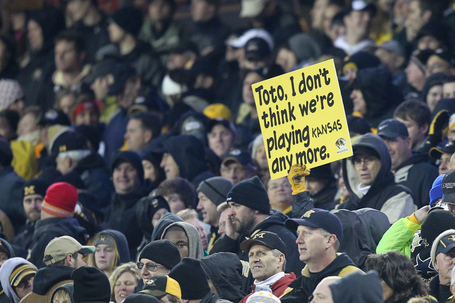 frick you.
Off the goddamn post on a chip shot.
I hate you.
Take your fricking chrome facemasks and stick it as high up your arse as you kind find.
frick you on so many levels.
Just go frick yourselves you stupid fricks. I'm so frickng tired of this bull shite. Just frick you, and then frick you again.
Goddamnit. If I have to get my dick hard for this team one more fricking time, I hope to god it's when I'm on my death bed.
I hate you Mizzou I really do.
You tickled my nuts, for the last fricking time.
frick you. Just frick YOU.

Someone tell me why the frick I was raised in that stupid fricking redneck state.
I fricking hate you all, just frick the whole goddamn state. You're all frickng stupid.

Today is why Mizzou will never be a powerhouse.We can get close, sure. But in the moment of truth we piss all over ourselves. frick it. Flame away.

This is like that episode of South Park where Butters gets dumped by the Raisins girl, then tells off the goth kids because he'd rather feel pain because it will lead to eventual happiness.

Hoping for numbness, but all I feel is pain

I came home last night and slept like a baby.
If that baby was drunk, still dressed in his regular clothing, and on the couch till 7am.

I think the fact that I'm already no longer angry says a lot about how being a Mizzou fan has affected my life.

There you go, SEC. You have nothing to worry about. MU will ALWAYS find a way to fuck themselves in the ass. It doesn't matter what sport. For the one thousandth time, I am through with this team.

LACES THE OTHERWAY JESUS FUCK YOU HAVE ONE JOB

Gary Pinkel ... The snatcher of dreams

Our Father which art in heaven
Why God Why?

Guys. This is my fault. I believed a little bit in the third quarter. Broke my own rule. Sorry guys.

Ah, Mizzou... I knew you were hiding in there somewhere.
Fall apart in the very end. Sounds about right.

I want to die.

Fuck conservative playcalling on offense and defense. Fuck blowing a 17 point lead.
Fuck the running game. Fuck the passing game. Fuck the secondary for not knowing how to cover a dump pass.
Fuck everyone at that game and everyone watching on TV. Fuck all of you here on Rivals.
Fuck me for thinking we could go a year without some stupid ass shit playcalling that costs us a lead and a game.

I hope a comet comes in and just sends everyone into oblivion. I'm done with this planet.

Played it softer than a gay guy at a sorority house slumber party.

MY GOD! Can we please have one decent year where you don't piss all over my hopes and dreams? Is that too much to ask?

I have to go replace a door tomorrow. Thanks, Mizzou. If my neighbor's dog so much as whimpers tonight I'm going to bury it alive. 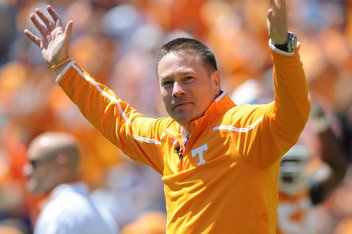 "Sort of dominated" the line of scrimmage. What does totally dominated look like? Nagasaki?

This game is looking like "Arkansas Ass-Blasting 2: Moving East"

Alabama. You should know, we play WorleyBall. The rules include throwing to feet instead of hands, overthrowing into the stands, and tricking your opponent by throwing where there are no receivers. Get your shit together bama, you're not playing by the WorleyBall rules.

I wasn't anticipating having to drink nearly this drunk in the halftime. Fuck

I've got four 1/2 gallon growlers of high gravity and I've about polished off the first. Its looking like I may need all four.

I'll be buttchugging if you guys need me.

Just an update. I have began drinking heavily.

HAHAHA YOU DIDN'T COVER THE LINE IN THE FIRST QUARTER!

Do you Bama fans get tired of winning?

I'm a huge fan of Butch so far but for the love of God how does your wife let you leave the house with the top button of your polo buttoned?

Fuck the SEC homerism if it means Bama wins the NC.

Thanks for the "upset alert" silliness, ESPN. Just gives Bama fans another thing to laugh about on the way to their frat houses after half time.

Is it bad that I'm muted the game to watch a DIY kitchen back splash video on Youtube?

Alabama is so friggin lucky they got Nick Saban as a coach I swear.

Verne Lundquist always brings us bad luck. Maybe he will have a stroke at half time.

We're the only team in the east that has to play these guys every year. We should drop them as a permanent opponent. We're a long ways from competing with them

Reminder: it's not even the 2nd qtr!

Someone at least break AJ Mccarron's leg and ruin their season.

There are going to be 0 holding calls on Alabama today, we either beat them by putting up points, or we have no chance.
SEC stands to lose too much money if Alabama is not in the National Championship game.

I don't even care that we are getting our asses kicked.
I'm just sick of the obvious favoritism of the refs towards Bama.
News flash: they don't need the help.

I'm gonna file a complaint on Nick Saban for bullying

I couldn't take it. Changed the channel to the cartoon network.

this might be the alcohol talking but I love alcohol

What a disappointing game. So unbelievably gutted by this. This is soul crushing.

I bet Saban makes it rain in the locker room.

It is obvious Alabama is good
It is also obvious we are not. And it is definitely obvious that I'm wishing for Bryant-Denny stadium to cave in and the earth to swallow the red team and it's scum of the earth fan base, but the white and orange team and fans make it out alive. 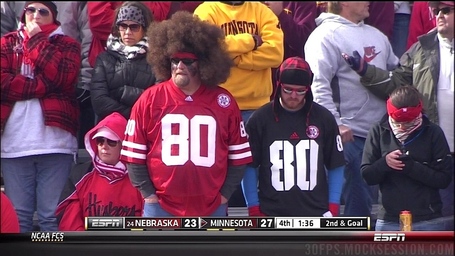 This is no surprise to any single one of us. This is life now in Nebraska. This God-forsaken purgatory that is Husker football

Hello defense my old friend...
Driving me to drink again...
Because the football's slowly creeping
into our endzone while I'm weeping
And the vision, of Cobb running in my brain,
still remains,
within the sight, of defense...

"SIEVE" IMPLIES THEY STOP SOMETHING FROM GETTING THROUGH. I WOULD GO WITH "VACUUM-LIKE" BECAUSE THERE'S NOT EVEN FRICTION.

Hey guys, when we tackle Cobb it's corn on the Cobb. Haha!.......I'm sad :(
Man being a sports fan really fucking sucks when your team is terrible. God damnit

may god grant me the serenity to continue watching this game.

I, too, wish our team was good enough to go to a Sugar Bowl.
EDIT: FIESTA BOWL. FUCK I'M DUMB.

Keeping the tradition of shitting the bed on national tv alive.

GUESS YOU'LL HAVE TO WAIT UNTIL THIRD DOWN TO RUN FOR 25 YARDS, GOPHERS! I BET THAT'S A MILD INCONVENIENCE!

I'm reading these comments and realizing we are gonna be featured on the next meltdown time article. Neat.

I love it when we let fat TEs look like Jerry Rice.

If anyone still BOlieves, please let me know.

Bench Bo, I mean fire Taylor.... I mean ah the hell with it.

If Minnesota didn't suck, we'd be down by 20-30 points. Thanks Minny

Geez. Bo is such an idiot. Watching that guy on the sidelines is like watching a four hundred pound bitch in the wal mart check stand with sweat pants and a tube top on, trying to pay for Vagiclean with food stamps.

Bo's clock management is about as impressive as Bielima's when he was at Wisky.

our D line couldn't stop a piss ant on a sunny day.

haven't seen Pap on the side lines much... he must be at WalMart shopping for a new ass.

haha man, this whole coaching staff should be gone by seasons end....Do they even have a clue in hell?

Minnesota isn't gonna kick, they are gonna run. it. down. our. throat. has does that sh#t sandwich taste?

I wonder if there are any more Bo tapes to leak?

NW and Michigan will bitch slap us too....Minnesota, bowl eligible before us..........OMG!

I want someone to do a spoof video of Bo's preparation on this off week. I can see him in his underwear and socks watching Battlestar Galactica practicing speeches by Adama.

Wake up call after wake up call and we learn nothing. Time to dump Bo like an girlfriend who doesn't learn.

I just became a huge Minnie fan..thank you for the gift you probably just gave us...

this is plain and simple...Minnesota players wanted this game...our guys stood around with their thumb in their asses.

Watching Alabama
Makes me cry, because it is just ridiculously sound football being played. Its honestly terrifying.

I have oft stated on this forum of just putting a life sized cardboard cutout of Bo(zo) and then play a tape recording of Bo(zo) telling us how the players failed to execute - that same speech is interchangeable no matter what team NU just lost to. At least Callahan could recruit top quality talent -but had difficulty adapting his coaching style to college ball after the NFL. Bo(zo) can do neither - coach/make in-game adjustments or recruit. Bo(zo) MUST GO!

Beck go fuck your grandmother with a pineapple.

Iv'e followed this team since 70
And this is the worst team I can remember. Fucking clueless. Fuck Pellini. Fuck Martinez

The good news is
We only have one more regular season loss to weather before the bowl loss. GBR!