Are You Not Entertained? Week 6: EDITED FOR RHODES.

Share All sharing options for: Are You Not Entertained? Week 6: EDITED FOR RHODES.

ED: Edits made. Sorry for the corrections that were necessary. That said, if you watched the game last night, then you know that Texas is still awful and that Texas will still always get the calls. Paul Rhodes is disappoint, son.

WOO HOO. Last week was a merciless beating against the spread, 6-0-1, providing some much needed cushioning for those discretionary funds. The good news is that this week has some equally tasty lines, especially from road favorites. And -from an entertainment POV, we get some pretty good conference games (and the death spiral of Notre Dame as Arizona State shells the Domers).

Texas -8 @ Iowa State: Let me tell you a secret: Gerg has the Longhorns D playing much better, and this week Ash is back, providing a passing game. Iowa State, conversely, is just plain bad this season. Fortunately for the Longhorns, the ‘Clones cannot do that which will position them best to keep this one out of double digits -run the ball. Texas goes big.

Ohio State -7.5 @ Northwestern: One of the least intimidating places to play, and one of the least passionate fan bases, hosts the Buckeyes. tOSU is nowhere near a national title team, but if you think their secondary is bad, go and take a look back at the NW-Cal game. Ohio State takes a few shots, but handily beats the Wildcats.

Maryland +15 @ FSU: Do I think Maryland can win this game? Sure. Do I think they will? Likely not. Jameis and the Noles are slow-starters, and the Maryland defense is significantly better than any FSU has faced to date (and the offense is built for power, as well). The Noles will get theirs, and I think do win, but this won't be easy, and it won't be by 15. I smell a 31-17 type FSU win.

Yeah, about that Darnell...

Florida -10.5 v. Arkansas: After a month of playing generous defenses, Bert is about to learn how far the talent level has dropped versus the elite. Can Florida score? Against this secondary and thin DL, absolutely. But, I just don't see the Hogs sustaining a ground game against the Gators, much less completing a pass. The score won't be impressive, but it rarely is with BIG DUMB MUSCHAMP FOOTBALL.

GT @ Miami -6: Conference play begins in earnest for the Canes, and it starts with the world's most obnoxious team, the Beeees. Still, if Scott LOLfler can look occasionally competent against this team, gotta' think Miami will equal that. The only question is whether the linebackers are built to hold up against Tech. I suspect it won't matter.[]_[] keeps rollin'.

La Tech @ UTEP (PK): To watch this game is to engage in self-flagellation and hair shirts. Skip Holtz has, impressively, in just four games managed to dynamite a once-decent La. Tech team. The offense is putrid, the defense is slightly better. UTEP, though not one much for stopping opposing teams, can actually score. The dozens of disinterested fans in the desert watch the home team scrape by in a hideous game. 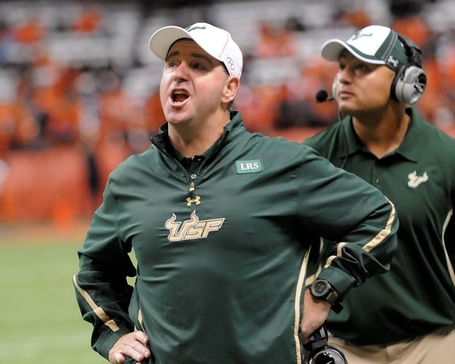 Will ruin your program for food...

LSU -10 @ Mississippi State: If ever there were a letdown game it is this. Letdowns or not, Mississippi State does not belong on the same field as the Tigers. Jeremy Hill will have a billion yards, and ODB will score a few times in a few ways, as LSU plays like crap and still covers.

UCF -11 @ Memphis: Hate to pick against the home team here, but the only way Memphis can cover 11 is if the city deploys its endless supply of armed robberies and assaults. Barring some miracle cobbled from the deepest darkest recesses of hope, UCF takes this one by three scores in a businesslike beating.