Since we have a bye this week, followed by a game we all know is a challenge every year, it gives us an opportunity to know our opponent that much better. Don't think AJ isn't doing the same thing. This week, the defensive backfield.

Finally, a defense we can sink our teeth into, analytically speaking. The LSU Tigers. Year in, year out, the best defense the Alabama offense comes across. This year, though, there are a lot of new faces. With new faces, as we all know, comes a learning curve. But don’t start celebrating yet, my crimson kool-aid consuming colleagues, because this is still a John Chavis defense, and they are still sifting through a 4 and 5 star laden depth chart. So much like our own revolving door of dominance, this defense will again be populating NFL depth charts soon.

Because this is the first week we are going up against something stronger than a stiff breeze since week 1, and also because we, like the aforementioned Tigers, are on a bye this week, the preview will be broken up into 2 parts. This is so you can get a better grasp on the personnel, schemes, and tendencies of this LSU defense, and impress all your in-laws when you diagnose that corner blitz right when AJ does. This week we are going to focus on the LSU secondary and pass defense.

There are two ways to look at this LSU defense: 1. In comparison with all FBS teams this season, where they stack up pretty well – 30th in scoring defense (21.9 ppg), 24th in total defense (351.7 ypg); or 2. In comparison with the ’11 and ’12 LSU defenses, which were both amongst the tops in the country in pretty much every category. Here they fail to stack up, but that really isn’t a surprise when you look at the losses in personnel they sustained. If you remember, LSU had 11 underclassmen declare early for the draft. A couple of these key losses were in the defensive secondary, where the Tigers are making due without its safety leader Eric Reid and oft-troubled but playmaking corner Tyrann Mathieu.

The cupboard is not bare though, with the experience of senior Strong Safety Craig Loston and the playmaking ability of Sophomore Jalen Mills, you can see why teams are struggling to compile yardage against this secondary. First, we will run through the personnel of this secondary, then we will look out how John Chavis likes to use them. 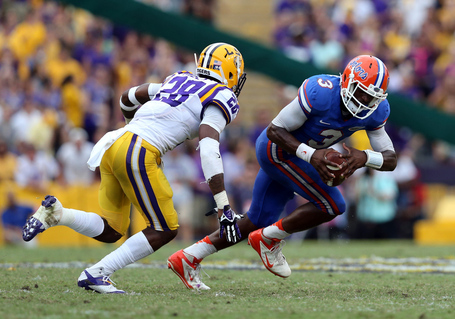 At corner, as mentioned above, is Jalen Mills (no. 28), a 6-1 189 lb. Soph who plays like a veteran, since he has started since his first day on campus last season. He has two picks this year, one against TCU and the other against Auburn, to go along with 38 total tackles and 3 sacks. Mills will remind many Tide fans of Dre Kirkpatrick, not only because he is an excellent corner, better than Dre was at press cover, but also because he plays very emotionally, and likes to trash talk opposing receivers. He was hit with a personal foul against Ole Miss after shoving Evan Engram after a play was over in the second quarter. This will be something to watch if he gets frustrated early.

Starting opposite Mills, at the other corner spot, is true freshman Tre’Davious White (16), a little undersized at 5-11, 177, but as you would expect from an LSU corner, plays beyond his years. A 5 star from Shreveport, White was the no. 2 ranked CB nationally coming out of high school and the 9th ranked overall player. 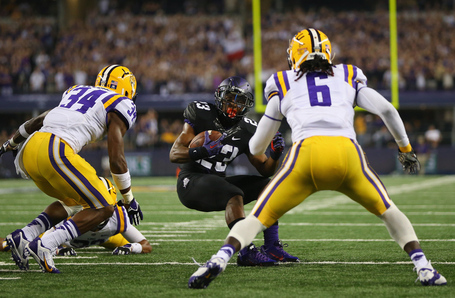 The leader in the back end of this defense, as mentioned before, is senior Craig Loston (6), 6-2, 209. The Strong Safety from Houston has played consistently since his freshman year in 2010, and is Chavis’s General on the field after the departure of Eric Reid last year. He hasn’t put up big stats in any year, having 1 pick and 31 tackles so far this season, but he is always there to clean up after the front 7 if something gets through (which as you can see is not too often).

At free safety is junior Ronald Martin (26), 6-1 218. Martin is another two year starter who is coming off a 12 tackle game against Ole Miss (not counting the Furman game, where he had an interception). Like Loston, Martin is a consistent presence and sure tackler in the back end that really doesn’t put up a ton of stats.

Another couple to look out for are freshman corners Rashard Robinson (21) and Dwayne Thomas (13), both who get time in nickel and dime situations, and both who had problems against Ole Miss. The Rebels’ game plan on offense was to attack the middle of the field, not to challenge Mills or White too often, and they found success in doing that, with Bo Wallace completing 30/39 for 346 yards. 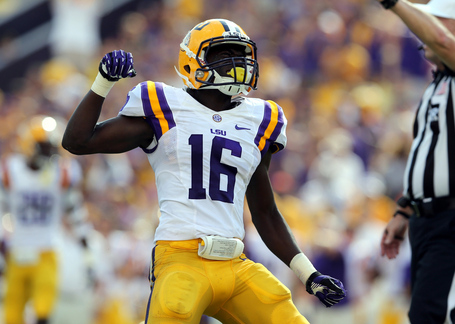 Traditionally, LSU and Alabama are known as two of the nation’s defensive powerhouses, but they get there in very different ways. Obviously, the first glance tells you that LSU runs a 4-3 and Bama runs a 3-4. But watching the two, it becomes clear that while Bama’s defense is built on positioning, communication, and scheme, LSU’s defense is about individual talent. Chavis runs a very NFL like defense, relying on the front 4 to both stop the run and put pressure on the qb on passing downs, and playing mostly press coverage in the back end. Doing this can be a blessing or a curse, depending on who you have manning the corners. Both of LSU’s starters are excellent in coverage, as you’d expect, but still, with a true freshman starting, and a true freshman and redshirt freshman coming in on passing downs, you have to like your chances if you’ve got depth at the receiver position.

Here we will look at two plays from true freshman Tre’Davious White, one good, and one not so good from the Ole Miss game. 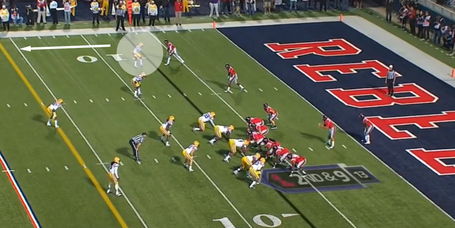 Here Ole Miss is backed up early in the game, facing a 2nd and long from their own 7. As normal, LSU’s corners are in press man, and on top of the screen White (16) is on one of the best receivers in the league, OM’s Donte Moncrief (12). 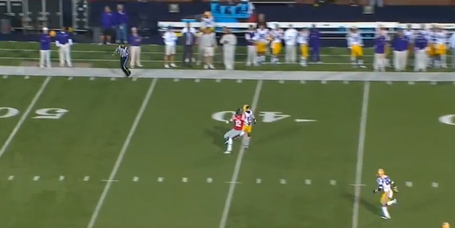 The QB on the play is pushed out of the pocket, and forced to throw a jump ball, usually not a bad idea having Moncrief one on one against a true freshman, but as you can see, White has great position as the ball is in the air. 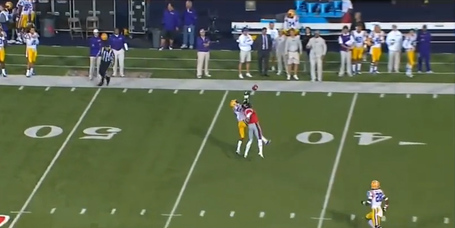 White goes up with Moncrief and actually has a better shot at the pick than Donte does at the catch. 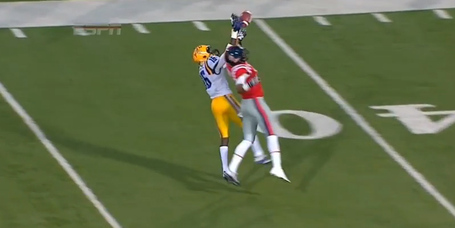 The great positioning forced the receiver to become a defender and knock the ball away to avoid an interception, which he does as this pass falls incomplete.

The next play is from later in the game. Again Ole Miss faces a 2nd down, but this time in LSU territory. The Tigers need a stop here to avoid letting OM put points up. 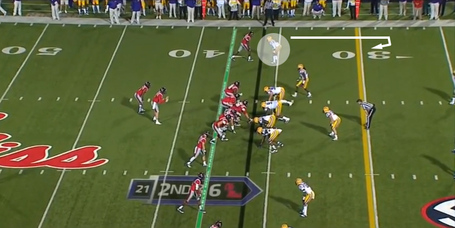 This time White is on Vince Sanders on top of the screen, like before in press man. Sanders’s route is a short button hook, hoping to get first down yardage. 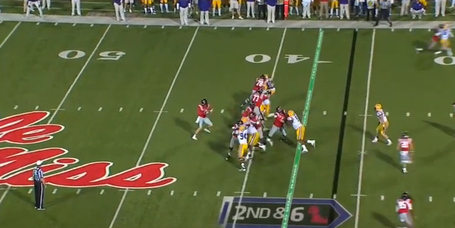 Hard to see in this frame, but if you look at the upper right, it looks like White has great coverage, and he does, but QB Bo Wallace noticed what you may, that White, with his eyes on the receiver, does not have a chance to locate the incoming pass. 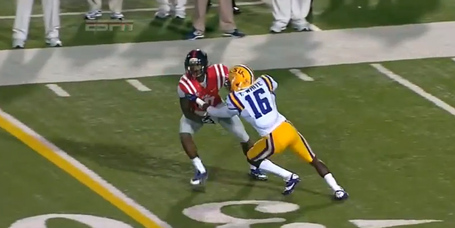 Here you see it better, as Sanders makes his break. White actually plays the hook well, but this time the pass is thrown upfield, kind of a reverse back shoulder throw. 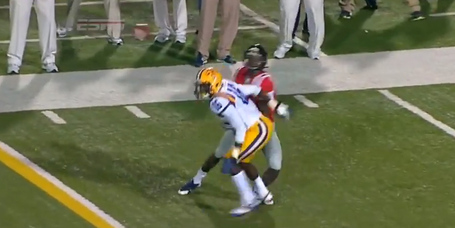 Because the Freshman is late getting his head around, Sanders has the jump on him. 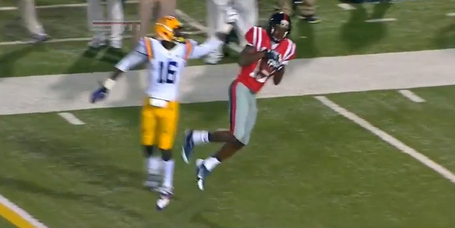 And he makes the catch and goes for 20 more yards down the field before getting caught just shy of the end zone.

As always, LSU has a ton of talent in the defensive backfield, but there are some experience issues. If AJ McCarron and the Tide offense can exploit the youth back there, they will find opportunities to move the ball through the air.

Next week we look at the big guys, part 2 will preview the LSU defensive front 7.