A Look ahead to what the Alabama offense will see across from them on Saturday in Lexington.

Share All sharing options for: Previewing the Kentucky Wildcats Defense

On the horizon for the Alabama Offense this week are the Wildcats of Kentucky. Another week, another cupcake? Not so fast. While the record indicates a team searching for an identity, a closer look only leads to more questions. Is the defense that hosts Alabama Saturday the one that gave up 35 to Western Kentucky? Or the one that held #7 Louisville, with Heisman hopeful Teddy Bridgewater, to 27 points in a "closer than the experts thought" contest?

This defense is ranked 59th in the FBS in scoring defense, giving up 25.6 per game. Stats don’t lie, but they certainly can deceive. UKs 5 games thus far include 3 against teams in the top 20, one mega-cupcake game against Bobby Petrino and Western Kentucky, who the ‘Cats can’t seem to figure out, and one regular cupcake game against Miami of Ohio, UK's only win, although it was in convincing fashion, a 41-7 drubbing. So while the ranking is unimpressive, the SOS has been pretty stout to this point. 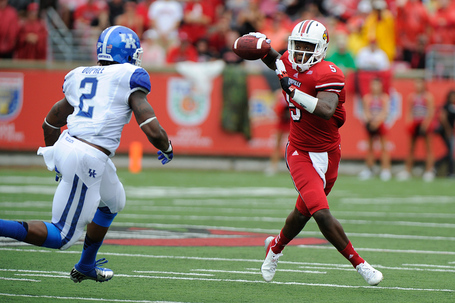 The ‘Cats will typically line up in a standard 4-3, with 2 rush DEs in Za’darius Smith and Bud Dupree. Both have been finding success getting to the passer. Smith (number 94) ranks 3rd in the SEC with 4.5 sacks. Dupree (2) has 3.5 sacks of his own to go along with 28 total tackles. While the defense will send the blitz on occasion, they prefer to try to get pressure from the front four, and drop the LBs into coverage.

Thus far Kentucky has had a tough time containing the run. They rank 98th in the FBS in rushing yards allowed per game, at 196.2. This past week they gave up 106 on 21 carries to South Carolina’s Mike Davis. The week prior it was Matt Jones, of Florida, gashing the Blues for 176 on 28. Even Louisville, not nationally perceived for rushing prowess, got a boost from Senorise Perry against Kentucky. The back managed 100 yards on only 11 carries, a 9.1 average. One tiny glimmer of hope for this rush D is that they held the current FBS top RB in terms of yardage, Antonio Andrews of WK, to under 100. Though it was just barely, at 99 on 20 carries. Since that first game, Andrews has gone off for 111, 122, 213, 182, and 155, respectively, in his next 5 games. 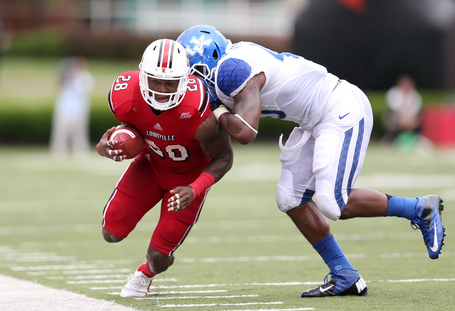 If they do have success stopping the run, it will most likely be because of the play of standout senior LB Avery Williamson (40), who is second in the SEC with 51 total tackles. Senior DT Mister Cobble (97), at 6’ 338, will try to do his best to clog the middle and occupy blockers to free up Williamson to make plays.

Against the pass, Kentucky’s D has fared much better, ranking 24th in the FBS, only allowing 195 yards per game and 4 TDs through the air, total. Though a closer look shows that they are giving up 8.33 yards per attempt, a very high number, showing that while teams are not racking up yardage or TDs at pace against the ‘Cats, they are completing a higher percentage of passes for healthy chunks of yardage. 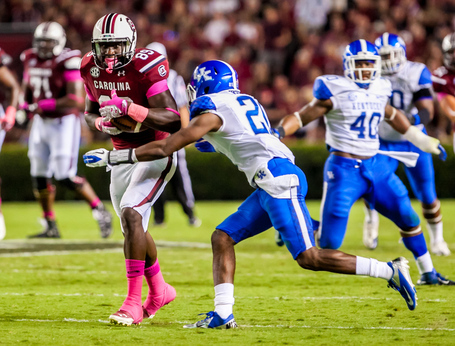 The one to watch on the back end of the defense is junior corner Nate Willis (21), a Juco transfer, first year starter, who comes in to this game with 22 tackles, 2 TFLs, and only a couple passes defensed, but has 4.4 speed and seems to be improving on the fly. There is next level ability with Willis, but he is still learning the game, as he did not play his last two years in high school to concentrate on basketball.

In this series of photos, you will see the effects of Kentucky’s lackluster rush D turning into a big play for South Carolina’s offense early in the game last Saturday. Because of the trouble stopping the run, Kentucky’s strategy was to try to load the box to stop Mike Davis on first downs. 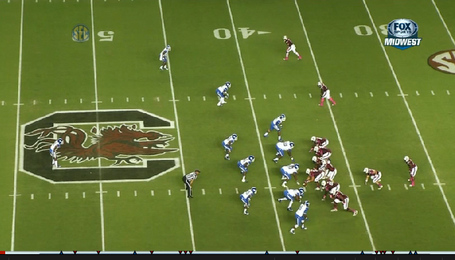 You can see here that UK has 8 in the box, expecting Conner Shaw to hand the ball off. 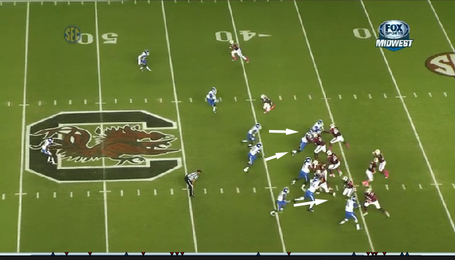 The OBC and South Carolina use this to their advantage, calling a play action to commit to the LBs to stop the run. 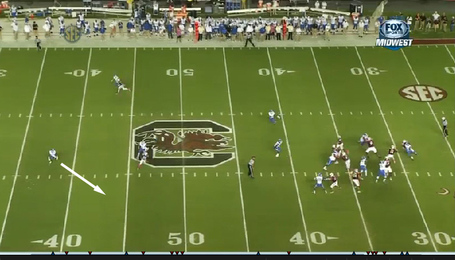 By the time the defense realizes it’s a play action pass, the linebackers are essentially out of the play, and in the back end, Kentucky has only 3 defenders against 2 Wide Outs. The single deep safety, in this case Willis (21), decides to help on the deep cross, leaving the post on top of the screen in one on one. 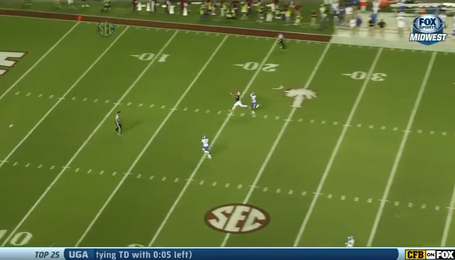 Here Damiere Byrd, WR for USCe, uses his exceptional speed to create separation and beat the CB for the early TD. Kentucky will use a similar strategy against Alabama, hoping to stop the running game at all costs. This will leave the play action available to AJ McCarron and one of his speedy receivers, maybe a chance for Cooper to make a play?

One thing to keep in mind is that wherever this defense is now, they should be improving game to game under new head coach Mark Stoops. Those unfamiliar with Stoops should know that he has risen the collegiate ranks, similarly to Coach Saban, as a defensive backs coach. He led the defensive backs at Miami from 2001-2004, coaching household names Ed Reed, Sean Taylor, and Antrel Rolle. After a couple seasons in Arizona under his brother and head coach Mike Stoops, in 2009 Mark moved to Florida State to take the Defensive Coordinator position. Stoops will certainly be taking a personal interest in the success of his defense, and you should expect this unit to be vastly superior to previous iterations of Wildcat defenses in the near future.