How are Alabama's offense and defense stacking up to the rest of the country?

After five games, two of which were cupcakes (three if you count the A&M defense) and two against seemingly solid defenses, the picture of how this offense will operate moving forward is, well, still unclear.

What we know: The running game still isn't where we'd like it to be but that may be a factor of teams loading the box and daring the passing game to beat them. Though the ground attack is marginal at best (68th is yards per game), when called upon, the offensive line and running backs are performing admirably (36th in yards per attempt)

We know the passing game, outside of maybe Colorado State, has lived up to the challenge. AJ is efficient as always even if he is throwing a few more INT's than usual. The receiving corps may not be the most explosive unit in country but they are doing exactly what is asked of them.

The offensive line is allowing 1.4 sacks per game which is tied for 42nd BEST in the country. Just taking a glance at the top 41 offensive lines, most play with a mobile QB, in a spread offense where the ball is out of the QB's hands quickly or in a run first HUNH. Oddly enough, against SEC teams, the offensive line has only given up 1 sack.

Penalties per game is starting to trend upwards. After getting flagged 16 times against A&M (12) and VT (4), as a team, 'Bama has only had 13 penalties called against them in the last three games. Penalties in SEC games continue to be the team's Achilles heel, accounting for 19 of the team's 29 total penalties called for the year.

As predicted, numbers on this side of the ball are looking a lot more like what we are use to seeing from a Saban defense and should only continue to improve. The team gained ground in almost every category, with the biggest jump coming in total defense (from 27th to 12th) and rushing yards per attempt ( from 39th to 15th).

Tackles for loss and sacks are still areas the team needs to drastically improve on but after recording ZERO quarterback hurries against VT or A&M, the front seven now has 11 in the last three games. 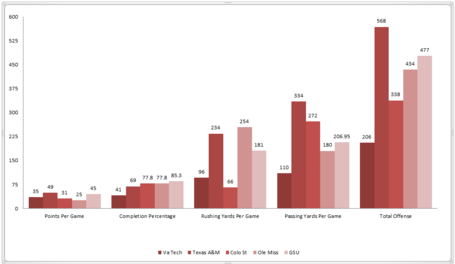 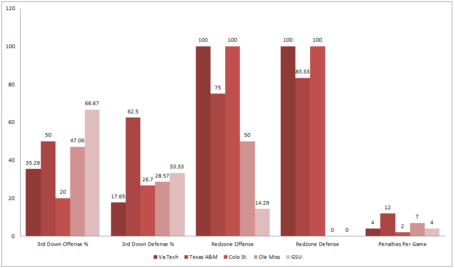