This week we look at the defense of the Mississippi St. Bulldogs. Another year, another disappointing season for the Bullies, who have to be growing tired of Dan Mullen’s empty promises year after year. MSU is currently 4-5, 1-5 against SEC competition, with the only wins coming from games against Alcorn St., Troy, a 1 point victory over Bowling Green at home, and a 6 point victory over Kentucky at home.

Last year, the story of this defense was outstanding CB play. After Johnthan Banks and Darius Slay were both selected in the second round of the NFL draft, Banks by the Tampa Bay Bucs and Slay the Lions, cornerbacks coach Deshea Townsend (yes, that Deshea Townsend) knew he had a couple large holes to fill. While the DBs are coming along, they are rather inexperienced, and are prone to miss coverages and other mental errors. In the absence of consistent backfield play, the front 7 have stepped up to become the strength of this defense, if again sometimes inconsistent themselves. 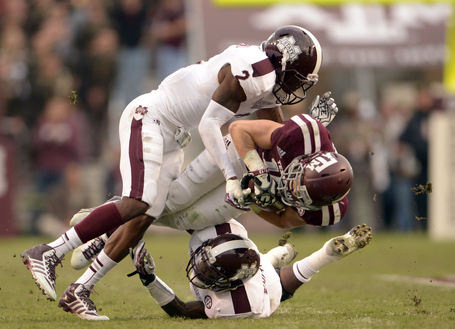 The Bulldogs are ranked 71st in the FBS in scoring defense, allowing 27.1 points per game. Their rushing D is ranked 35th giving up 141.67 ypg, while the passing D gives up 231.1, good for 65th in the nation. This stat shows that the inexperience in the defensive backfield is indeed the weak point. Manziel shredded the corners for 446 yards on a 30/39 passing day, including 5 TDs. Mettenberger also had a fair day, going 25-29 for 340 and 2 TDs.

That’s not to say that a rushing attack cannot be successful either. Jeremy Hill went for 157 on 16 carries against this defense in Starkville, and Mike Davis had 128 on 15. Both carried better than an 8.5 yard per tote average. It appears, based on this year’s statistics, that opposing teams have not had trouble imposing their will on the Cowbells, whether it was USCe, who preferred to keep the ball on the ground, or A&M, content to throw it 39 times.

The defense, like LSU, runs a standard 4-3. Unlike LSU, the size and talent level is very much Mississippi State. There are some names to be aware of for Saturday’s game. There are also a couple names to put in the memory bank for down the road, one in particular. 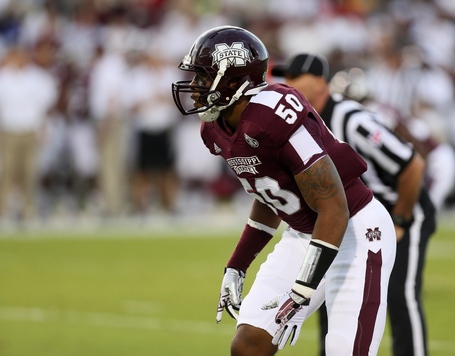 We will start with the front 7, led by redshirt sophomore LB Benardrick McKinney (number 50). McKinney leads the team in tackles, with 54, and also has 4.5 TFLs and a sack against the Gamecocks. The 6-5 235 pounder from Tunica typically lines up at Mike. Once he builds up some steam he can move, and is a strong tackler, but he often has trouble in coverage, especially if responsible for a quicker hybrid type TE. 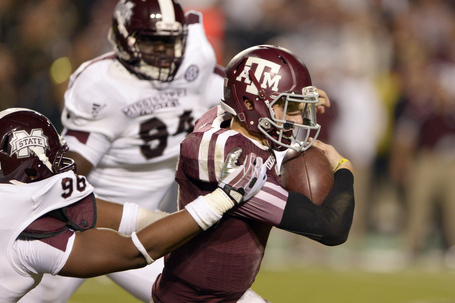 Up front, a smallish D Line can be effective getting into the backfield, but with 2 starting DTs at 280, a larger O Line will be able to push this line wherever they please. The Bulldogs will have to commit a safety into the box to be able to have any success against a strong ground game. The one name to remember, hinted at above, is Chris Jones (96). A true freshman from Houston, MS. Jones is already making a huge impact on games, even though playing time has been spotty. If you follow recruiting, you will no doubt remember how Jones went from a 3 star early in the process, to the no. 2 overall player in the country (only trailing Nkemdiche), according to 247, by signing day.

Listed at 6-5, 270 lbs, Jones was a big priority for Nick Saban and Alabama during this last recruiting cycle, but Jones honored his commitment to the Bulldogs. Even late when Hugh Freeze worked his voodoo and almost swayed him, he remained solid. This season, playing a reserve role mainly on passing downs, Jones already has 4 TFLs and 7 QB Hurries. This guy will be a terror for QBs probably as soon as next season, and I suspect he will be an All-American, 3 year 1st round type player. 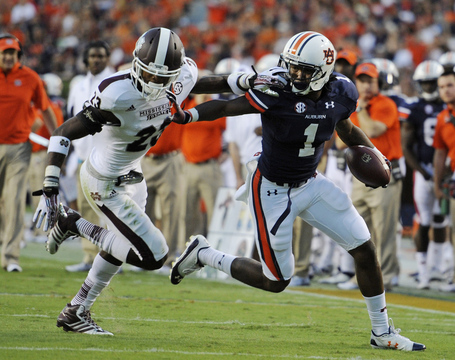 Moving into the backfield, there are a couple reasons for optimism moving forward, but again, this season, they are not quite where they want to be. Taveze Calhoun (23), a redshirt sophomore, is the guy to keep your eye on in the back end. With 3 pass break-ups and 27 tackles, Calhoun always seems to float around the ball, and did a pretty good job of bottling up Mike Evans last week. He was not listed as a starter after coming back from an injury in 2011 and playing sparingly last season, but seems to have emerged as the Bullies best cover corner. On the other side, Jamerson Love (5), is playing better and better though, with 4 pass break-ups and 3 interceptions in his last 6 games.

This is a defense that has some emerging stars. Everyone mentioned in this article will be back next season, and with the exception of Love, are sophomores or younger. That said, this year has been, and probably will continue to be, a struggle. After giving up 59 to LSU earlier in the season, and 51 to A&M last Saturday, the confidence has to be waning. Add to that the fact that the defense is coming off of two straight road games against top 15 opponents, and you’d have to imagine that they are running on fumes. Expect a big day for AJ, TJ, and KD17 as long as they can protect the ball.