A brief look at quarters coverage and the greatness of Alabama's free safety.

I don't write much about Alabama's players in my posts, but on a few occasions (and in comments) I've mentioned how highly I regard HaHa Clinton-Dix. Too often good play by a free safety goes unrecognized -- a free safety is typically only recognized either if he's intercepting passes or getting beat deep. But those handful of plays comprise a very small percentage of that player's entire body of work, and should hardly be used to define him. Clinton-Dix's interception total from last year certainly raised some eyebrows, but on the whole I think most fans fail to fully appreciate his contributions on a game to game basis (NFL scouts do appreciate it -- which is why HaHa is being pegged as a top 20 pick in next April's draft).

The reason NFL scouts love his ability is the same reason he is such an integral part of the Alabama defense, and that reason is his versatility -- specifically his ability to play quarters coverage. Up until very recently safeties were asked to do one of two things -- defend the deep part of the field or come into the box and defend against the run and short passes. But now that has changed, and the single most valuable defensive player is a safety capable of playing in the box and helping against the run while also having a deep middle assignment should the offense dial up a vertical passing concept. Clinton-Dix is one of those players, and no play exemplified this better than his interception on Saturday against Mississippi State. In order to take a closer look at the specifics of quarters coverage, lets break down Clinton-Dix's assignment on this particular play.

First, here's the play in its entirety, along with the replay (which provides us with a better angle):

Alabama is in their nickel package against Mississippi State's three wide receiver set. Clinton-Dix has come down into the box to play quarters coverage (not to play man to man against slot receiver Jameon Lewis, as the announcer seems to think). 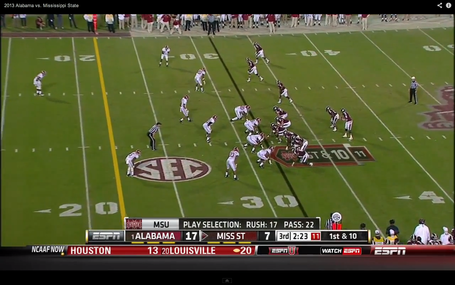 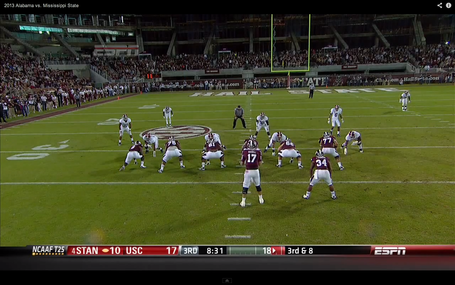 Immediately Tyler Russell notes Alabama's one deep safety look, offset to the right, and thinks he has the deep seam open. Against a lesser player he would've been right, but Clinton-Dix has the unique ability to be in two places at once. 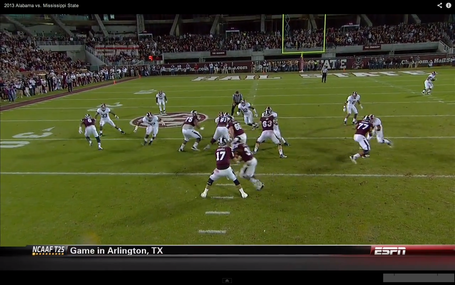 Russell pulls the ball out of the mesh point and scans the field looking to pass. So Clinton-Dix reacts accordingly. Notice how, initially, his hips are opened up so he can see all three wide receivers, because his next move depends on which pass concept is being used. If the slot receiver runs a short/intermediate route, Clinton-Dix's job to either cover him or help cover another receiver (depends on the specific play call and specific pass concept). If the slot receiver runs down the seam, Clinton-Dix's job is to cover him one on one.

Lewis, the slot receiver, is running a vertical route, straight down the seam. It takes Clinton-Dix no time at all both to recognize this and turn his hips to run with the receiver. 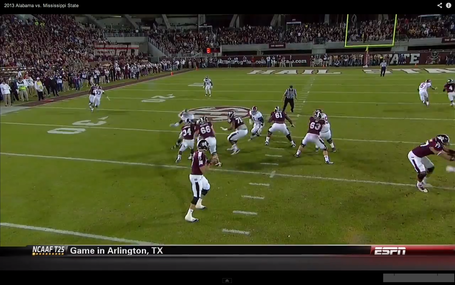 Clinton-Dix then proceeds to run stride for stride with Mississippi State's fastest wide receiver. He waits for Lewis to look back for the football before doing the same. At this point he could not possibly be in better position to make a play on the football, which he does to the tune of a crucial interception. 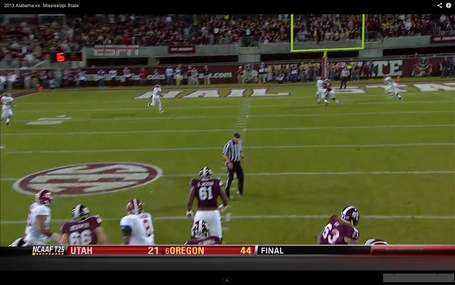 It's fairly easy to see how difficult a job this is for a safety -- to first have to read run/pass, and then, if it's a pass, to open up his hips and run straight down the field with an extremely fast receiver. It really is being in two places at once -- the box and the deep middle of the field, depending on the play, which can only be diagnosed after the snap. There are few people in both college and the NFL who can successfully do this on a consistent basis.

Clinton-Dix plays successful quarters coverage every single game, on multiple occasions, and it typically goes either unnoticed or isn't fully appreciated. Not only is he the premier player at his position at the college level, but I think he has the chance to be the same at the NFL level. Never again will there be another Ed Reed -- in my opinion, one of, if not the greatest defensive football player ever, not just due to his production but also due to how he revolutionized the safety position -- but Clinton-Dix is the sort of player that might be able to come close. He's the near perfect combination of physical ability and football instincts, at the single most important defensive position on the field. He has, at most, four games left in his Alabama career before he departs for the NFL, so let's enjoy watching him while he's still here.