Share All sharing options for: A Salute To The 2013 Alabama Seniors: C.J. Mosley

Alabama has had a successful decade at inside linebacker to say the least. Starting with DeMeco Ryans, now terrorizing offenses as the Eagles’ pro bowl linebacker, to Rolando McClain, Dont’a Hightower, and now C.J. Mosley, Alabama is without doubt the new Linebacker U. This latest one, though, could very well be the best of the bunch. No senior appreciation week would be complete without the headliner and arguably best player on the team, number 32 C.J. Mosley.

Often there are players that can do well in situations, there are players that you can count on to be consistent, and then there are players, like Mosley, that you have become so accustomed to see making plays that you hardly even notice them anymore. In fact, C.J. has almost gotten to the point where he only makes headlines for mistakes, like dropping a sure interception, because they happen so rarely. He demolishes the bigger running backs up the middle, he chases down the scat backs to the sideline, he blows up the option, he covers tight ends and backs out the backfield like a corner, all while reading the offensive personnel, calling out the defensive plays, and making adjustments to audibles. There is simply not a more complete linebacker in the nation.

…but you already knew that.

In this article we will re-live some of C.J.’s best moments as a member of the Tide, we will discuss what he means to the team at present, and make some bold predictions about his future in the league. 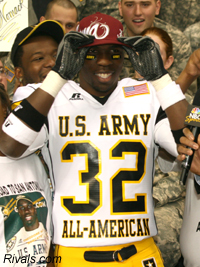 C.J. came in to Alabama in the 2010 recruiting cycle. A scrawny 6’-2", 212 lbs out of Theodore, AL, Mosley was actually recruited as an outside linebacker even though he had 474 (!) tackles in 3 years of varsity football. Mosley was ranked 56th overall coming out of high school by Rivals, the 2nd ranked in the state of Alabama and 6th OLB. The four star was probably lost on most Bama fans coming in, due to the fact that there were 7 players more highly ranked that signed that year (Milliner, P. Sims, Fulton, DeAndrew White, Alfy Hill, Menzie, and Arie Kouandjio). Mosley quickly proved that he was going to be one of the best of that group during his freshman campaign.

Though small for a Nick Saban Linebacker, Mosley saw extensive playing time as a true freshman in 2010 when Dont’a Hightower moved from Mike to Will 4 games into the season. Even though he was overshadowed on a defense with the likes of Hightower, Upshaw, Barron, and Dareus, Mosley tallied 67 tackles, good for 3rd most on the team, and had a team high 10 pass break ups. The moment when Tide fans knew that they better keep an eye on Mosley, though, was when he returned an interception for Touchdown against No. 7 ranked Florida in the 3rd quarter to salt away a 31-6 victory. You all remember, back when a victory over Florida was still impressive.

After his phenomenal freshman campaign, earning first team Freshman All-American honors from the FWAA, Rivals.com, and CollegeFootballNews.com, Mosley dropped off the radar somewhat in 2011. Splitting time with Nico Johnson at Will, now that Dont’a had moved back to Mike for his senior year, C.J. played primarily in nickel packages in passing situations. He still finished the season with 37 tackles and 2 sacks, even while enduring a dislocated elbow mid-season that kept him out of 3 games. Not many people remember the dislocated elbow, but I’d bet the farm that all Bama fans will forever remember the dislocated hip. Of course, it wasn’t injury to Mosley that makes the play memorable, but the interception of a Jordan Jefferson pass mid-way through the 3rd quarter in the BCS championship game against LSU. At that point in the game, it was 12-0 and although the Bama defense was playing lights out, it was the interception that really shut the door on the Tigers.

In 2012, Mosley’s junior season, the linebacking corps changed dramatically. Gone were Hightower, Upshaw and Sam backer Jerrell Harris. In stepped Trey DePriest at Mike, Xzavier Dickson at Jack, and Adrian Hubbard at Sam. The one position that remained the same was the platoon between then senior Nico Johnson and C.J. Mosley. The familiar rotation was unchanged, with the larger Johnson playing base defense against the threat of run, and Mosley coming onto the field on passing downs. This is the season where the national media began to take notice of how good C.J. Mosley really was. He recorded 107 tackles, good for 6th in the SEC, and like his freshman year he had 2 interceptions, including a memorable one against Michigan in Dallas, again returned for a TD.

Even though Mosley lacked the intangibles of the "best linebacker in the nation" that year (and by intangibles I mean – well, you can figure it out), he was statistically similar in almost every category, and was clearly the best linebacker on the field in the 2012 version of the BCS championship in Miami. A Butkis finalist, Mosley racked up the hardware that season as a first team All-American by the AFCA, Walter Camp, AP, Sporting News, and Sports Illustrated, as well as first team All-SEC. All this while not being a full time player until the title game against Notre Dame.

Mosley knew all along that his weakness was size. Coming in at 212 lbs, and now as a senior playing at 238, he knew that being a full time starter meant getting bigger and showing the coaching staff that he can perform against the run. So far this season, he has passed that test with flying colors. Again a finalist for the Butkis award, and a shoe-in for All-American honors, Mosley keeps going about his business, racking up 81 tackles through 10 games this season, including 7 tackles for loss, 5 pass break ups, and 7 QB Hurries. Probably more valuable than any stats he can put up, would be that leadership factor. This defense begins and ends with Mosley, and although quiet by nature, he has on more than one occasion called out himself and his teammates when they need it. Mentioned above, C.J. makes all the reads, all the calls, and all the adjustments. His value to this team is indescribable.

The future for Alabama at Will LB is not clear. The two-deep this season are both seniors (Mosley and Tana Patrick), and it looks like next in line will be Reggie Ragland. I would say that Dillon Lee, Ryan Anderson, or Reuben Foster may have a say before it’s all sorted. What IS clear, is that Mosley’s future looks bright. Universally considered a 1st round pick, even at a position that is not usually taken highly, I wouldn’t be surprised to see C.J. taken mid-first by a team who is looking for a leader, smart player, and a tackling machine. I think his speed will serve him well at the next level, and while his size was a limiting factor at Bama, it seems like 6-2 240 is about what NFL coaches look for in a LB, as Patrick Willis and Ray Lewis are both 6-1 240. I wouldn’t be surprised in the least to see Mosley at a Pro-Bowl in the not-to-distant future.

Congrats on a fine career C.J. We thank you for everything you have done on the football field, while always representing the University with class and dignity. Roll Tide.