On the agenda this week for the Tide are the Mocs of UT-Chattanooga. The talent discrepancy between the Crimson Tide and the Mocs is such that a lengthy breakdown is not necessary, so this week’s opponent defensive preview will be abbreviated.

Share All sharing options for: Previewing the Chattanooga Moc Defense

In last week’s defensive breakdown, against Mississippi State, we struggled. Whether it was communication issues, a hangover from the exhausting LSU breakdown, or looking ahead to future analyses, it seems that the performance was not up to par. So this week, we focus on the fundamentals. Stats, scheme, and a player to watch when the Tide is on offense. Then next week we can ramp up preparations for the Iron Bowl.

The FCS Mocs are 8-3 so far this season, with this game being their last regular season game. They are 6-2 in the Southern Conference, with losses to Samford and Georgia Southern in conference play, and a loss to out of conference UT-Martin to start the season. They do have a victory over an FBS opponent, with a 42-14 demolition of Georgia State (a rare common opponent - Bama beat Georgia State 45-3 earlier this season).

UTC actually ranks pretty highly amongst other FCS schools in defensive categories: 6th in scoring defense at 17.8 per game and 11th in total defense giving up 319.3 yards/game. The passing defense, again, has done well this season, only giving up 148.6 ypg through the air. The rush defense, though, is the weakness. Ranked 68th in the FCS, Chattanooga has been giving up an average of 170.6 yards per game on the ground. 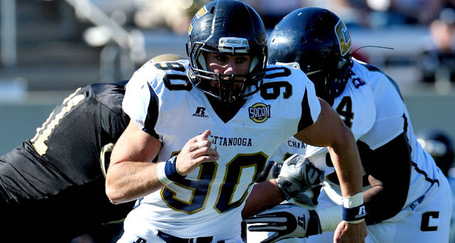 The Mocs run a base 4-3 scheme, and there is one guy you need to really look out for, number 90 defensive end Davis Tull. Tull, a 6-3 240 lb Junior from Knoxville, is the reigning Southern Conference player of the year, being named so after accumulating 12.5 sacks last season as a sophomore. He has already broken the all-time UTC career sacks record (24) this season. After his huge sophomore season, he was named to the FCS All-American team, and named to the pre-season All-American team this year. Tull was also ranked the no. 6 overall player in FCS and the no. 1 DE by Phil Steele in his FCS preview.

Tull is quick off the line, and uses a combination of inside and outside moves to maneuver around Right Tackles. On film, he looks like eerily similar to Jared Allen. Even when not getting the sack he affects the play consistently, either forcing the QB out of the pocket or forcing the O Line to scheme ways to keep him out of plays, opening up opportunities for his teammates along the D Line. Tull would be an FBS player without a doubt if not for a broken femur keeping him out the bulk of his senior season at Bearden High in Knoxville. He only began playing football in the 9th grade, and until his junior year in HS played Wide Receiver, only switching to defense then.  Expect to hear this name again in May 2015 during the NFL draft. 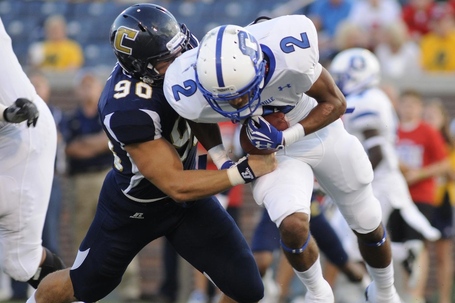 As good as these guys have been against FCS competition, no one should expect them to put up much of a fight against a FBS elite like Alabama. Georgia Southern gave the Tide fits a couple years ago, but that was more scheme related, as Bama was not familiar with the triple option, and that let them have a degree of success. This will be a different animal, with UTC employing more of a pro-style attack on offense. The Tide offense will probably have a few hiccups, I wouldn’t be surprised to see Davis Tull get some pressure into the backfield, but ultimately, the Bama run game should be enough.