Your daily dose of Crimson Tide news and notes.

"We just want to go out there and compete and give it a shot." Mocs wide receiver Terrell Robinson said. "Then you see where you are at halftime and you hope you have a chance. Those three-minute stretches, we don't want to allow those to happen. ... We've just got to play our smartest game."

Robinson played some quarterback last week against Samford and will likely play quite a bit, if not the whole game, against Alabama. Starter Jacob Huesman (knee) did not practice Wednesday and remains questionable. Linebacker Muhasibi Wakeel (ankle) also is questionable. Two offensive players that won't play, Russ Huesman said, are wideout Tommy Hudson (ankle) and running back Keon Williams, who will miss his fifth straight game with an ankle injury.

From the sounds of it, the Chattahoochie Whatchamacallits will almost certainly be without their starting quarterback this Saturday. Looks like Bama may be able to pull out a win after all.

Steen, who grew up less than a four-hour drive from Tuscaloosa in Clarksdale, Miss., will start his 34th game Saturday against the Mocs. He'll have a few more in this final season at Alabama, but it will be his last at Bryant-Denny Stadium. Alabama coach Nick Saban raved about the Crimson Tide's senior right guard Monday. Now in his second full year as a starter, Steen has embraced a leadership role on Alabama's rebuilt offensive line in his own way.

"Anthony's played really, really well for us all year long," Saban said. "He's been really consistent in his performance. I think that a lot of the players respect him. He certainly sets a good example every day for other players to emulate, which I think is a critical piece of being a good leader. I also thinks he cares in a very quiet way, in his way, about trying to help the other guys develop, which I also think is a very important part of being a good leader.

"Even though he may not be a rah-rah guy in a lot of ways, I do think he has a significant impact on that group and he has been a good leader for us on this team."

It's an interesting exercise to look back on the career of a guy like Steen. I would guess that the first memory most of us have of Steen is of him getting blown up by Nick Fairley (defensive lineman at Auburn) in the 2010 iron bowl, and then unwittingly standing with his back to a loose fumble a foot away. In that moment, it would have been hard to envision Steen becoming an anchor on back-to-back fantastic offensive lines. I'm glad that he had the opportunity and talent to make a different legacy for himself.

"He's playing, he's just not starting," Saban said of Jackson. "He started a couple of games, did a good job. How many different people have we played at cornerback this year? We've started at least five different guys at some point in time. The two guys we start, does that mean there's something wrong with the other three guys? No, it just means the two guys that are starting are the best guys we have to play right now based on what we have to do right now."

On multiple occasions throughout an answer that stretched for more than 2 minutes, Saban praised both Jackson and fellow freshman Maurice Smith. "Eddie Jackson's going to be a really, really good player," Saban said. "Him and Maurice Smith are both two freshman players that are going to be really, really good players, but it takes time for these guys to develop, especially at their position where one mistake is a total exposure.

"Eddie did a good job for us when he played but his big thing has been being able to be consistent week in and week out. He's going to be a really, really good player for us. We're really happy to have him here. There's really nothing wrong with him. He's just being a normal freshman."

I get the mental limitations that Jackson has had due to this being his freshman year. That understanding doesn't make it any less frustrating that he isn't able to play a larger role, though, when you consider his physical abilities, and the relative weaknesses posed by those filling in that hole.

"At some point, it's all about you and not about the players," Stern says of Cochran's yelling. "Everybody's like a baby looking for attention."

Stern and his sidekicks, some of whom seemed largely unaware of Alabama's recent success on the field, weren't buying into to Cochran's high-energy approach.

"I have to believe that a guy who sounds like that is trying to overcompensate because maybe he's not the greatest trainer in the world."

My God, the ignorance in that audio clip is astounding. Robin states matter-of-factly "He's not the best trainer in the world" mere breaths away from asking "Is Alabama supposed to be good?".

Only one piece of news to be taken from it, though... Howard Stern has officially been moved from "On Notice" to "Dead to Me". 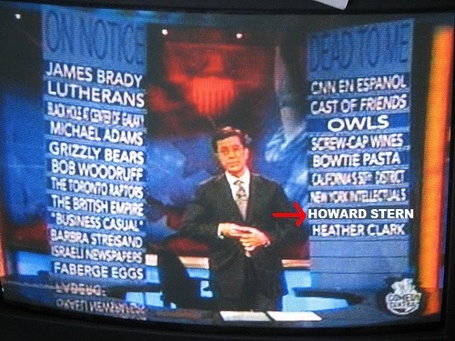