A Salute to the 2013 Alabama Seniors: Anthony Steen

Ricky Muncie waves adieu to one of the most Bammiest Bama players ever, and refuses to apologize for making this tribute more than twice as long as any other.

Share All sharing options for: A Salute to the 2013 Alabama Seniors: Anthony Steen

When the Roll Bama Roll editors first concocted the idea to have a special round of salutes to our departing seniors, I was having difficulty with my email. For some reason, my outbound messages were getting hung up in the iPad Outbox (thank you, Apple.) I was desperately afraid that I would miss out on the chance to grab Anthony Steen out of the list of names.

(Seriously, ask the staff if I wasn't adamant about this.)

And it isn't that I have some kind of man-crush on him (NTTAWWT.) It's simply that the linemen never get the understanding they deserve. The stats just aren't readily available for us to peruse and compare. In fact, I'm willing to bet that Coach Saban and the staff has a whole litany of stats they keep on the big uglies up front -- they just aren't ready to share trade secrets with the rest of the coaching profession.

Here is what one service provides on Anthony Steen's illustrious collegiate career:

Yeah. That's all. His Freshman and Sophomore seasons never existed, and he only rates a line as a Junior because he happened to make a tackle on a turnover.

The linemen don't get the love, because we don't understand them. So this will be our love letter to Anthony Steen, to understand just what he truly signifies to the program.

His first playing experience as a redshirt freshman came backing up Barrett Jones, after Jones was injured as a guard. We make a lot out of the fact that ZOMG BARRETT JONES WON NATIONAL TITLES AT THREE DIFFERENT POSITIONS and ZOMG BARRETT JONES CAN PLAY ANY POSITION ON THE LINE. What we fail to notice is that we had the luxury of moving Jones to tackle after that season, because Steen was maturing as a guard.

Coming into the game with Chattanooga, Steen has logged 35 starts, and provided he stays healthy, will finish with a stout 39. And there's a good chance he will be healthy enough to play. Despite missing some time in his early career with a concussion, Steen is one tough dude. This is what he shrugged off in practice:

Rising from the Shadows

Steen has done his time in the trenches, playing with a nasty and ruthless efficiency that would have turned more heads if he wasn't the "worst" lineman on the best college football line of all time. Warmack and Fluker would go in the first round, Jones would own the position hardware and be the erudite graduate student spokesman for the line. That left two returning starters -- and of the two, more people were talking about Cyrus Kouandjio than could spell his name without looking it up.

Anthony Steen is the Bammiest Bama player of all time, getting it done without making a scene, and without clamoring for his turn in the spotlight. In that regard, he reminds me of another football great...

Don Gibb was best known for his role as Ogre in the Revenge of the Nerds movies. All seven of them. 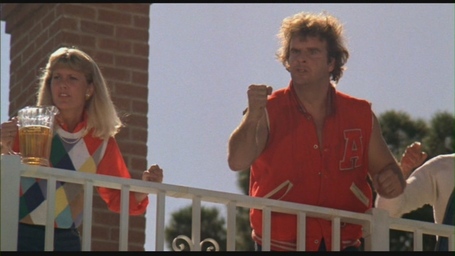 Hair? Check.
Red jersey? Check.
Letter is an A? Check.

The parallels between Gibb and Steen extend far beyond wardrobe and hair. While Gibb might be best known for shooting beer bongs and giving wedgies to nerds, he did play college ball, and even landed a stint with the San Diego Chargers in the 1970s -- where he amassed absolutely no published statistics whatsoever. Sound familiar?

As an actor, Gibb did not go on to the levels of fame of his original Revenge of the Nerds classmates. Maybe he would have been more of a household name if he wasn't sharing time with:

Being the Best Anthony Steen

At the end of the day, all you can ask for Anthony Steen is to shrug off the comparisons, and be the best Anthony Steen in the world. And since there is no real numbers to form a statistical trail, we had to let the pictures tell the story, and measure him through Bing image search: 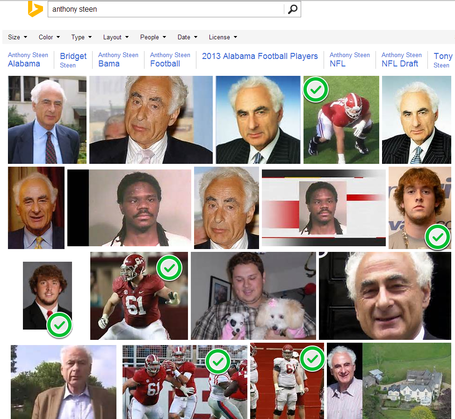 You can see that the first page of results brings up 18 pictures, and of those our monster road grader captures six. He's not even out of college and he already owns 33% of the world's Steen-ness! 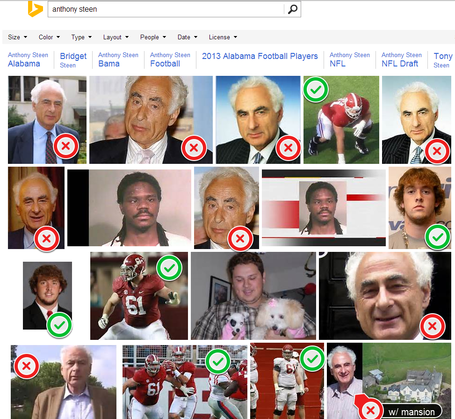 Half of Planet Earth's first-page Anthony Steen imagery belongs to some old white dude, who spent 36 years in the British Parliament. (Check out the digs in the lower right.) 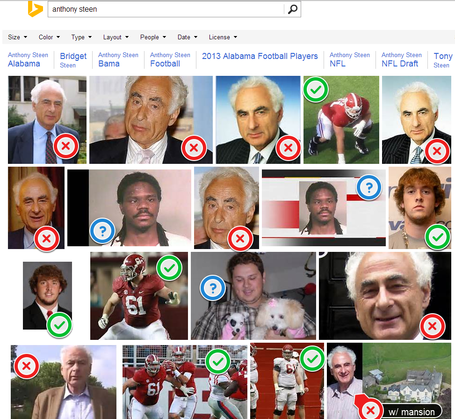 As you can see, the final three images are of some cross-eyed black guy, and a dude who is a little too proud of his puppies. Our boy Steen is just one NFL draft away from pancaking those images back to page five of the image results, and all before he is legally old enough to rent a car!

The Future's So Bright...

I can say with reasonable certainty that barring something catastrophic and unforeseen, you will be seeing Anthony Steen playing on Sundays. His NFL scouting grades are fantastic, and he is described by those in the know as having excellent technique. (Even if some believe that at 6'2", he's too short to play Guard and will have to move to Center!) Maybe, just maybe, he can share one of those televised Sunday afternoons with Don Gibb -- who is now best known as one of the Barbarians in the Capital One commercials. (Gibb is on the right, about to administer some "musical criticism" to an unsuspecting virtuoso.) 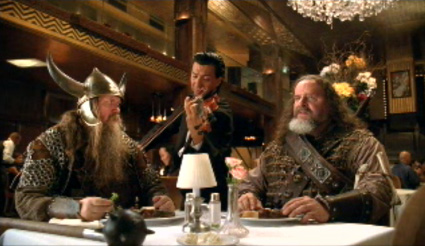 So, here's to you, Anthony Steen. You get the job done, you get dirty, and you play smart. You also seem to be having one hell of a lot of fun. You've represented us with class, and will continue to do so. We're gonna miss you, 61. 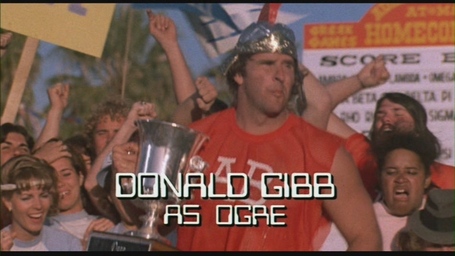 No, not you, Gibb. Steen! The ogre only a Bammer could appreciate enough to love. 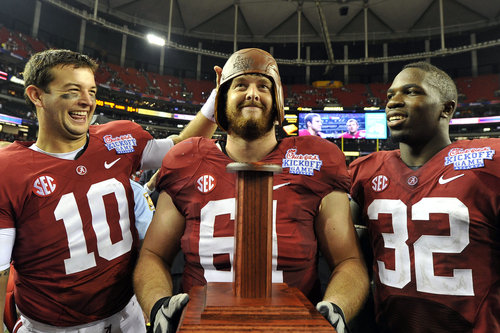 I am the HAPPIEST GUMP in ALL the lands! Bring me my mutton and mead!