A Salute To The 2013 Alabama Seniors: AJ McCarron

In a little less than two months from now, the last BCS National Championship Game will have been played, and the history books and record books will close forever on that chapter of the sport's history. Only AJ McCarron will have one more than one BCSNCG win as a starting quarterback. But will his number be two, or will it be three?

Share All sharing options for: A Salute To The 2013 Alabama Seniors: AJ McCarron

But he's a game manager!  Right?  And doesn't that mean he can't throw?  That he's sitting back there behind the center in green eyeshades and a visor balancing the books while his talented teammates do all the work?

Well, heck, I don't know, maybe it does.  I guess we'll just have to look up a few stats to see if McCarron is actually any good at this passing thing.

Maybe we should start with interception percentage, because really, what could be more important to winning big games and championships than limiting turnovers?

The record book says that AJ has thrown 13 interception in 967 passes, a 1.34% career mark.  Off the top of my head that seems pretty good.  What's the record, anyway?  Well, that depends, as the NCAA lists two record-holders with different numbers of attempts.

Both those records are well within AJ's reach.  If AJ throws another 53 or more passes without a pick, his career percentage will fall to 1.27% and he will pass Volek.  That's very possible, but it's even more possible, perhaps likely, that he will pass Harrell.  All AJ needs to do to pass Harrel is throw another 83 passes over the next 3 games to get to the minimum number of career attempts for that category, 1050.  So long as he does that, even if he throws 3 more picks among those 83 attempts, he will beat Harrel's record with a 1.619% career mark.

At worst, McCarron will finish very high among the all-time NCAA leaders of this crucial stat.  But as it turns out, AJ has one or two more decent passing stats to go along with the headliner.

His career pass completion percentage of 67.2% is the 19th-best in NCAA history and the second-best in SEC history behind Manziel's 68.4%.

So probably yes, McCarron can throw a little. 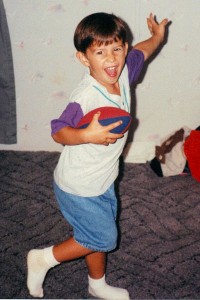 As a 5-year-old boy, little AJ was thrown off a Waverunner into a wooden dock, resulting in horrific injuries to his head, face and left eye that almost cost him his life.  AJ still carries metal plates and screws in his head to remember the incident by.

The young are resilient, and AJ McCarron was no exception.  Like his brother Corey, now a teammate at Alabama, AJ turned to football.  Unlike Corey, AJ became a big star. 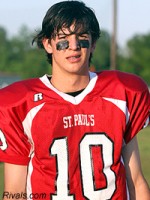 During his junior season, AJ, along with teammates including Mark Barron, led St. Paul's Episcopal School to a 14-1 record and the state championship, which was good practice for his college career.  On May 3, 2008, he committed to Alabama and signed his letter of intent in February 2009 as a four-star prospect.

As a freshman in 2009, McCarron earned a BCS championship ring.  He also earned a redshirt.  Although Star Jackson was listed on depth charts as the Tide's #2 quarterback,  it was widely bandied about by the end of the regular season that McCarron was Alabama's true backup and his redshirt would be removed if McElroy could not go for any reason.  As it turns out, McElroy gutted his way through the BCS Championship Game against Texas with badly bruised ribs that greatly limited his effectiveness - something that 2013 Tide fans can be extremely grateful for, as McCarron would no longer be around if he had played in that contest.

McCarron did play in nine games as McElroy's backup the next year.  Eight of them were garbage time in blowouts.

One was not.  Late in the infamous 2010 Iron Bowl collapse, when Auburn had already taken the lead and Alabama's offense had been decimated by injuries to McElroy, Julio Jones and Darius Hanks, and with All-American guard Barret Jones missing the entire game with a sprained ankle, McCarron was rudely thrown to Nick Fairley and the wolves in the last minute of the contest as his first competitive game time.  McElroy had been completely unable to move the Tide offense in the 4th quarter without Jones or Hanks, and McCarron fared no better, throwing four staight incompletions to effectively end the game.  Nothing like that would happen to AJ again.

After that true baptism of fire, McCarron engaged during the off-season in a high-stakes, high-wattage competition with fellow phenom Phillip Sims for the Bama starting job.  The 2011 season began with no announced winner, as McCarron started against Kent State but Sims got equal playing time.  The two quarterbacks were each credited with two interceptions.

As it turns out, that was the last time that Phillip Sims saw action as the Alabama quarterback in a competitive situation, for after AJ turned in a solid effort the next week in a 27-11 road win over Penn State, the job was all his.  McCarron had a fine season, finishing with a 147.3 passing efficiency rating that was the third-best in the SEC despite having to deal with a lackluster receiving corps, but he suffered with the rest of his teammates when, on a cool Tuscaloosa night, one of the classic defensive struggles in college football history went the wrong way, 9-6 to LSU.  McCarron hit 16 of 28 for 199 yards, with one interception, a fine performance against that championship-quality defense, but AJ and the TIde could not score in overtime and McCarron was blamed for the loss by some.

He responded like a warrior, leading the Tide to businesslike destruction of its remaining foes, and, in the wake of upsets to championship contenders Oklahoma State and Oregon, a rematch against LSU in the Sugar Bowl.  Louisiana State had just completed what has to be considered the best regular season in modern college football history, and the media narrative going into the game was whether LSU would still be the AP national champion even if it somehow lost the game.

Alabama and McCarron answered that question on January 9, 2012 with a resounding "no" in a dominating 21-0 win.  The Tide's defense led the way, holding the 40+ points a game LSU offense to 92 yards in a dominant shutout, but the Tide offense had plenty to say about it after it came out winging under McCarron.  The sophomore QB hit 23 of 34 for 234 yards and walked off with the offensive MVP trophy.

In 2012 there were no off-season questions about who the quarterback job belonged to, and they certainly didn't crop up after the games started, as McCarron turned in an outstanding season for which he probably deserved honors and plaudits that never came.  When all was said and done, McCarron led the nation in passing efficiency and threw 30 TD passes with only 3 picks, including an astonishing streak of 289 consecutive passes without an interception.

The most memorable moment of the 2012 season, though, came when AJ hit T.J. Yeldon for a historic game-winner against LSU - a game in which it turned out that McCarron had played injured.

Once again, Alabama caught the benefit of late-season losses by other contenders to write its ticket to the BCS National Championship Game to meet Notre Dame.  But to get there, the Tide had to get past a tough Georgia team in the SEC Championship Game.  McCarron hit 13-21 for 162 yards and one all-important touchdown, a deep strike to Amari Cooper that turned out to be the winning score.

At that point, the real work was done, as Notre Dame proved to be an unworthy BCS opponent - either that, or Alabama was just that good.  Once again, Alabama came out gunning behind McCarron in the National Championship Game.  Although it was Eddie Lacy, and not AJ, who got the offensive MVP award this time, the Tide QB played what may have been the best game of his career - at least to date - hitting 20 of 28 for 264 yards and 4 touchdowns against the vaunted Irish defense. 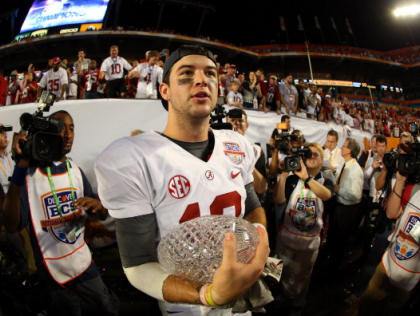 As for 2013, we've already mentioned the fine stats McCarron is putting up this year, and it's worthy of note that AJ may be the best bet right now for the Heisman Trophy.  But while the little statue would be quite an honor, it wouldn't be as big an honor as quarterbacking three straight BCS national championship winners.  If McCarron manages to pull that one off, we can say with utmost certainty that he will be in a class by himself.

AJ McCarron played his last college football game in Tuscaloosa last Saturday, but his era is not over.  Whatever happens over the next three games, it has been a fun ride, from 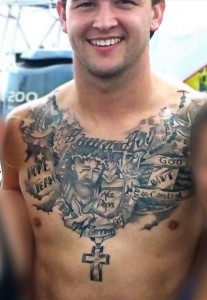 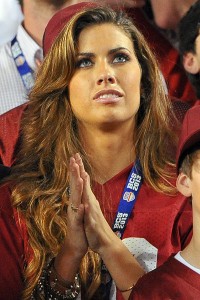 to a lasting place in all our hearts.

I said all our hearts. 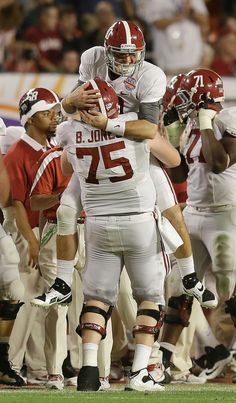 It will probably be a long time before we seek the like again . . . or will it?  One thing for sure, it has been a three-ring circus at Alabama with AJ McCarron under center.  Or should that be a four-ring circus?