Random Thoughts From Around the Country: Week Thirteen

Who needs a playoff when things seem to just work their way out on their own? B)

Share All sharing options for: Random Thoughts From Around the Country: Week Thirteen

The Cowboys were a 7.5 point underdog but we here at RBR knew better. Right?

Credit Coach Mike Gundy (46 and going strong) and his staff for an excellent game plan. The keys to beating the Bears are building a lead, stop the run, and don't give up the big plays. And that is what they did. Baylor's first 11 possessions resulted in 5 punts, 2 fumbles, 3 turnover on downs, and a field goal. They would not score again until it was 35-3 in the 4th quarter.

Oh, what might've been for Okie State if only they had beaten 4-7 West Virginia.

On the very first play from scrimmage, Arizona DB Shaquille Richardson made one of the most amazing interception "assists" you will ever see. Falling out of bounds, Richardson grabs a tipped ball and scoops it to linebacker Scooby (not a typo) Wright.

It was all downhill from there for Marcus Mariota and the Ducks. The Oregon QB added a fumble and a second interception likely dashing his Heisman hopes. The Wildcats ran out to a 28-9 halftime lead and did not let up. Although outgained 506 to 482, Arizona played solid football with no turnovers and only 2 penalties. Their 11 for 16 third down efficiency led to almost eleven more minutes of time possession. Ka'Deem Carey carried the ball a colossal 48 times for 206 yards and 4 TDs for the 'Cats - very similar to the way Stanford beat Oregon. His longest run was 20 yards. I mention this to point out that his numbers were NOT padded by a long run. QB B.J. Denker added 102 yards rushing and 178 yards with 2 TD through the air.

* I am officially declaring the Chip Kelly era over. First year head coach Mark Helfrich has been living off of Kelly residue for most of the season. It is not going to get easier from here. Getting routed by 4-loss Arizona is very un-Kelly like. The last time the Dux lost a regular season game by 26+ to an unranked opponent was (well, I'll be) Arizona in 2006.

Control Their Own Destiny 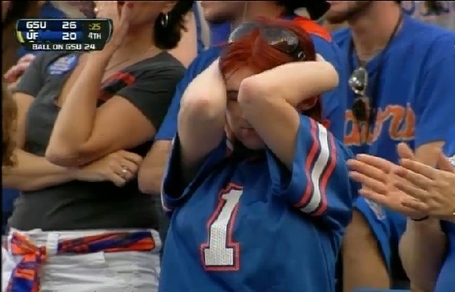 Wow. Just wow. I really thought Florida coach Will Muschamp would get a pass on the season due to the crazy number of injuries but there is no getting past this. No offense meant towards Georgia Southern. Tide fans know this is a tough out-of-the-ordinary offense to defend. However, the Eagles were coming into the Swamp as a 6-4 FCS (I-AA) team who lost to Appalachian State (4-8) a few weeks earlier and had injury problems of their own including a back-up QB. There are no excuses to lose this game.

The Gators were clearly unprepared for the triple-option as they gave up 429 yards rushing. GSU attempted only 3 passes, all of which safely found their way to the turf. It seems to me that a good coach would have prepared a special defense for this match-up. Muschamp will make some lucky team a nice defensive coordinator next season.

What this means for Florida:

* The MVP name of this game is GSU placekicker Young Hoe Koo.

For the first time this season, I am actually a little intrigued by the Heisman race. Texas A&M's Johnny Manziel, Baylor's Bryce Petty, and Oregon's Marcus Mariota all had high-profile belly-flops on Saturday. FSU's Jameis Winston has an off-field problem that - in theory - is supposed to weigh into the character portion of voting.

I don't want to get you too excited and too Gumpy but could AJ McCarron sneak in there? A big game against Auburn and the SECCG sure would not hurt.

Heisman trophy ballots are mailed in late November and are not due until after the conference championship game weekend of Dec. 7.

Vanderbilt 14 Tennessee 10 - The Commodores beat the Vols in consecutive games for the first time since 1925-1926. Rocky Flop is now 4-7 and ineligible for a bowl.

Duke 28 Wake Forest 21 - Duke almost turned back into Duke. The Blue Devils are one win away (@UNC) from the ACC Coastal title and the honor of getting demolished bu FSU.

FSU 80 Idaho 14 - Jameis Winston and RB Devonta Freeman came out of the game after the first series of the third quarter with the score 49-7.

Kristi Malzahn's "SHUT UP!" of the Week goes to the Baylor Bears. Kristi sez: You cannot win championships with a one-dimensional offense!

- The winner gets the "Chancellor's Spurs" - a grand tradition that goes all the way back to 1996!

- The winner gets the "Golden Boot" - another grand tradition that goes all the way back to 1996! Although it may go to Will Muschamp this year.
Miami (FL) at Pitt 2:30pm/3:30pm ABC