Auburn's defensive stats and scheme, as well as tendencies and personnel to keep an eye on while AJ and the Crimson Tide offense have the ball on Saturday.

Share All sharing options for: Previewing the Auburn Defense

Next on the agenda for the Crimson Tide is, of course, the Iron Bowl. Like you would expect of a Gus Malzahn team, the defense is an afterthought. There is certainly some talent there, and statistically speaking, the unit is not terrible. In terms of total defense (yardage per game), we have played 4 SEC teams this season that are worse, Arkansas, Tennessee, Kentucky, and A&M. The down side for Auburn fans is that this still puts them 10th in the conference, which is good enough for 70th in the FBS (406.9 ypg).

The rushing defense has certainly had more success than the passing, which seems odd since Auburn’s standard D is the 4-2-5, basically Nickel in all situations. But don’t chalk that up to stellar play by the front 6 stopping the run, as they still give up over 150 yards per game on the ground, ranking them 53rd in the country. The pass defense has just been awful. Ranked 100th in the FBS, this backfield is giving up 253.7 yards per game. 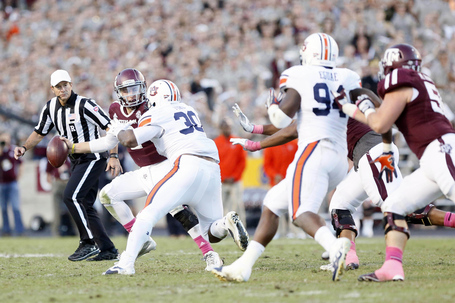 Like the Mississippi State defense, the stats tell you that the defense is better at stopping the run than the pass, but that doesn’t mean you can’t have success either way. Jeremy Hill of LSU ran all over this defense, carrying 25 times for 184 yards. Rajion Neal from UT ran it 20 times for 124. Arkansas ran for 222, coming up 8 yards short of having 2 100 yard backs.

Mentioned above, this defense is a base 4-2-5, but to the untrained eye, it looks very similar to a more typical 4-3. The difference is that Auburn has an every down "star" defender, an extra safety that probably won’t line up in the same place more than 5 times a game. Against a running team like LSU earlier this season, the star, Robinson Therezie (number 27), often lined up as a 3rd linebacker, sometimes would come up to the line as a 5 tech, outside the DE, and even sometimes a 3 tech, in between the DT and DE. Then on passing downs Therezie can line up and cover a TE or slot receiver, or fall back and give Auburn a 3 deep safety look. 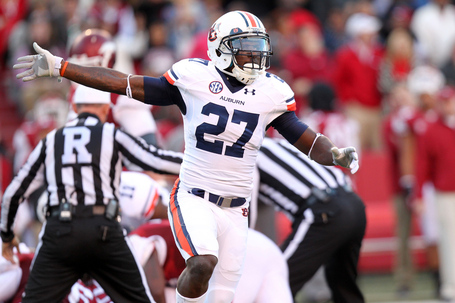 Therezie, a 5-10 204 Junior from Miami, is not the most talented guy on the team, but he is very versatile. He has 4 interceptions on the year, including one he took back to the house against Ole Miss. He is also 3rd on the team with 50 tackles. D Coordinator Ellis Johnson will move Therezie all over to give the offense different looks and try to stack personnel in his advantage. The problem with that strategy is that he is small for a linebacker, and slow for a defensive back, so Nussmeier and AJ can certainly turn the tables on him if they so choose.

I mentioned that Therezie is not the most talented guy on the defense, but moving up front, Dee Ford (30) probably is. The 6-2 240 lb senior has 8 sacks so far this season, which is good for 3rd in the SEC and 20th in the country. He is a speed guy, who in every bit of film I’ve watched has used only 1 move, the speed rush to the outside. He often lines up wide, way on the outside shoulder of the RT, and sometimes even outside the TE in the 9 tech. Despite his tendency to do the same thing over and over, he still has great success, so that says something to his speed and ability. On some rushes, he even resembles a certain player down in Columbia, SC. That all said, he is a pass rusher first and foremost, and has had trouble stopping the run, oftentimes taking himself out of the play on draws and screens because he is in such a hurry to get up the field. 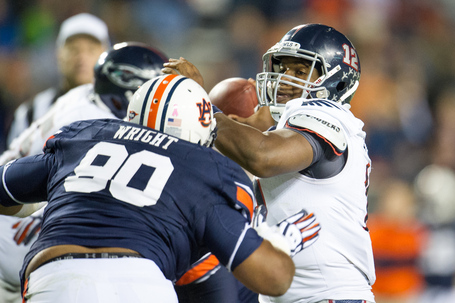 The largest impediment to a Bama rushing attack will be Gabe Wright (90). Wright is a load at 6-3 296, but still moves pretty well. He lines up at the nose, usually at the 1 tech on either side of the center, or the 2 tech on top of the guard. He has 7 tackles for loss this season including 2 sacks, and can sometimes show flashes of Nick Fairley at DT.

Another thing to look out for up front is a bunch of different numbers. Auburn, following the leads of LSU and Alabama, uses up to 11 guys in those front 4 positions, and rotates them pretty consistently. A couple of the young guys were elite names in recruiting, Carl Lawson (55) at DE and Montravious Adams (1) at DT, and both have made a significant impact in their true freshman seasons.

Moving back to linebacker, be aware of Cassanova McKinzy (8), the man with the most Auburn name ever. The lone underclassman starter, McKinzy is second on the team with 53 tackles, has 6.5 tackles for loss, and an interception. The 6-3 246 lb sophomore is the Nico Johnson type who excels against the run and sometimes will come off the field in obvious passing situations. 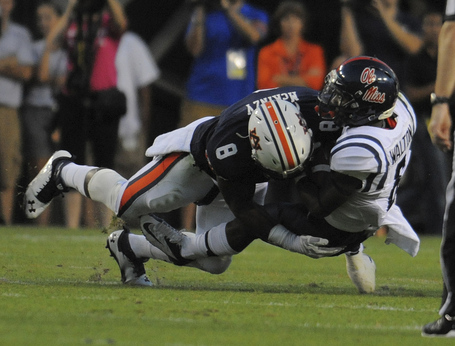 The leader in the defensive backfield is senior Chris Davis (11). Although you never want your cornerback to lead the team in tackles, Davis does with 55. He also leads the team in a better category for the position, pass break ups, with 11. Even though this backfield is made up exclusively of juniors and seniors, Davis is the only returning starter, and it has showed many times this season. Auburn ranks 85th in the country in 10+ yard plays allowed, with 163 this season, or 15 per game. 101 of those were through the air. Both Johnny Manziel and Aaron Murray threw for over 400 yards against these guys, and Mettenberger probably would have been close, but LSU focused on running the ball in the poor weather.

We will look at two plays here from early in the Georgia game. The first was with about 8 minutes left in the first, Auburn up 3-0, Georgia still trying to get things going offensively. 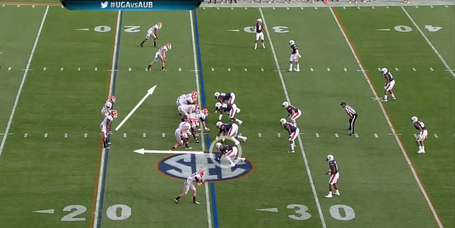 Circled on this play is Auburn DE Dee Ford. He will employ his typical speed rush straight upfield hoping to get around the slower RT John Theus. 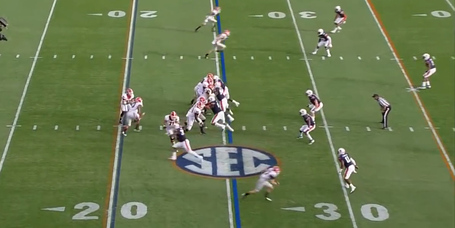 This play shows some poor planning by Georgia OC Mike Bobo, as it’s a play action fake to Gurley to the strong side (left), when that side is already blocked very well with the TE Arthur Lynch stoning Auburn’s right DE, LaDarius Owens. 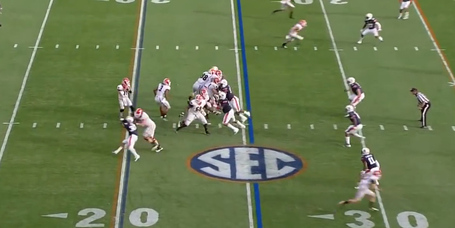 This leaves no help for Theus on Ford, and Gurley has no one to block. 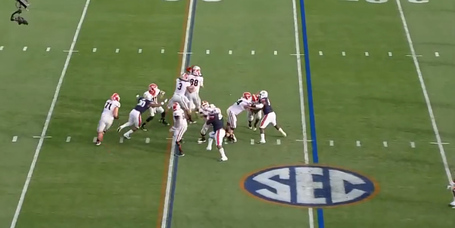 As you can see, Ford easily gets around the outside of Theus and has a free shot on Murray. The hit resulted in a fumble which Georgia recovered, but you can see the impact Dee Ford can have if unaccounted for. Ironically, had Murray just handed the ball to Gurley instead of faking, the Bulldogs probably would have gained at least 10 yards on the play.

The next play is later in the game, with 13 minutes to go in the second quarter. Auburn has already built up a lead of 13-0 and Georgia has not moved the ball at all to this point. 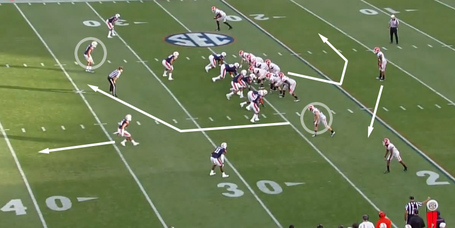 On this play, Bobo calls for a play action left, to get all the movement to that side of the field, and for Murray to roll out right after selling the fake. Michael Bennett (82), circled UGA WR, runs a crossing route across the face of the Auburn zone D. Auburn safety Jermaine Whitehead (9), also circled, is responsible for the area in question. The other safety Ryan Smith (24) pulls back and is responsible for anything deep. 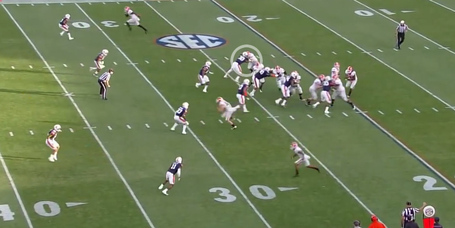 You can see as the play develops, it looks like Auburn has good coverage set up. Notice TE Arthur Lynch, circled, on this play. He blocks Dee Ford, but is about to peel off and run right, giving Murray another, probably first, option. This is a play that should look familiar as Alabama runs it a few times a game. 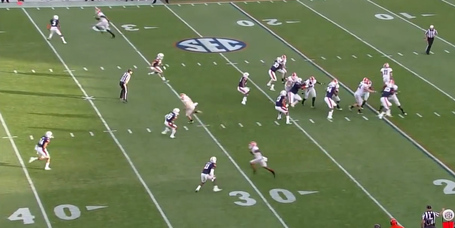 Now Whitehead is in trouble. He thinks he is good behind, as corner Jonathan Jones (3) has the Georgia wideout to his left, and it looks like Michael Bennett is going down the seam, straight towards deep safety Ryan Smith (24). So he decides to move up to cover Lynch, who he can see here is about to move out into position to catch the ball. 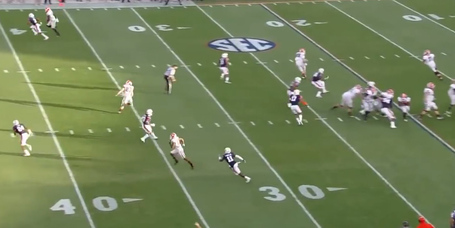 Whitehead is in no mans land here. Lynch is open short of him, and Bennett, who has executed his cut, is open beyond him. Note deep safety Smith is completely fooled by Bennett as he turns back to cover deep. 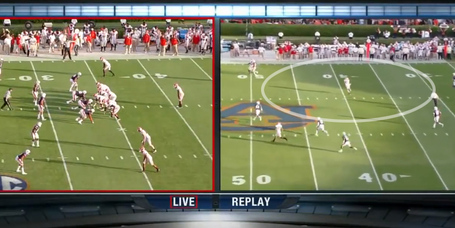 The last image is tougher to see since Georgia was already up and ready with the next play during the replay. But you can see that there is not a soul within 10 yards of Bennett when he catches the ball. The WR at the top, no. 18 Rumph makes a block on Jones (3) and Bennett gains 41 yards on the play.

This defense is designed and executed as one that thrives when aggressive. They stack the box, they rush the passer, they play fast and run like mad to get around the ball. When it works, they look great. In the first few series against UGA they looked like a force. But when UGA started protecting Murray a little better, what he found was some wide, and I mean WIDE, open receivers. The Bulldogs combined that with many quick passes, negating the Auburn pass rush. That led to much more success.

The key to this game will be how Bama’s offense responds to having trouble running the ball early. Auburn will sell out to stop the run, and I expect even with sound blocking, it will tough sledding early. If McCarron can hit a few throws to move the chains on those few first drives, the running game will find more and more success, and then I think the Tide will use that rush attack to keep Auburn’s offense on the sidelines. This has to be the strategy for Alabama, like it was against LSU and A&M, to keep Auburn’s playmakers on the bench and Gus’s playbook closed.