Closer Look: How Unfair is the SEC Schedule?

Does the SEC favor Alabama in its scheduling practice or is it just the luck of the draw?

Share All sharing options for: Closer Look: How Unfair is the SEC Schedule?

We've been teasing LSU fans for the past few years cause of all the"THE SEC IS SO UNFAIR" talk and honestly it has gotten quite annoying. LSU points to their schedule, looks at Bama's (and our titles) and claim the system is unfair. They say playing UF every year is a disadvantage while Alabama getting Tennessee means Alabama has the easier road. This may be true for the last 8 years but Florida hasn't always been Florida and that is certainly true this year.

Even if you look at LSU since 1971, playing UF every year certainly had little to no effect on their chances of winning the SEC and/or playing for a National Title. It wasn't until the early 2000's when this became a point of contention among the LSU faithful. Wonder what changed?

And as of right now, neither Florida nor Tennessee look all that impressive and UF very well could be in the middle of another coaching change in the coming months. So moving forward, unless Florida pulls themselves out of their current gutter, I would say playing Florida every year should be considered a competitive advantage..

But before we can draw any real conclusions I think it's best to remove our gump for a minute and at least try to understand their (LSU's) position..

"A key piece to every conference is that we'd be able to describe the path to a championship in an equal and direct manner," Miles said. "Scheduling should not in any way decide championships repeatedly or throughout."

"I'd have to say there's a repeated scheduling advantage and disadvantage for certain teams in this conference based on tradition and traditional matchups. I'll give you an example. Auburn played Florida and Georgia 19 times since 2000. That makes a heck of a difference. Now, how many times has the West gone through each opponent? How many times have they played them? Not that many times." 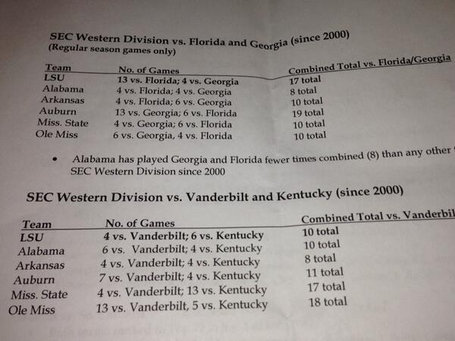 "I think we've all seen how much it pays off when you don't have to play the top teams from the other division," said Spurrier, who has voiced his concerns to several in the media this week.

"I'm all for Alabama and Tennessee playing every year. We can still play eight, and that would be their ninth game every year. It just won't count in their conference records unless that's the year they're supposed to play in the league. I'm sure Tennessee would love that."

"Coach Saban doesn't have a big rival out of conference he plays every year, and I understand it's hard for them to get (nonconference) games," Spurrier said. "So let them and Tennessee play every year. That's what we ought to do.

"Maybe Alabama can pick a fight with Texas. Texas doesn't play Texas A&M anymore, and they need somebody to play out of conference."

Then don't play Clemson every year...Solves that problem, right Coach? Oh, the Clemson game is important to you? How about that....

From ATVS (I asked them to give me their thoughts on the scheduling issue):

SEC scheduling is a particular sore spot for LSU fans, as the Tigers routinely play one of the hardest schedules in the country. Here are LSU's SOS by Brian Freamau's ratings by year:

Try and guess which year LSU won the national title. The funny thing about that is that the Schedule Gods certainly came through in 2007, as LSU became the first 2-loss national champion largely due to its tough schedule and the fact the top one-loss contender lost to LSU out-of-conference by 41 points. So it's not like a tough schedule hasn't had its benefits. LSU almost certainly won the 2007 title due to its OOC schedule, and the good fortune of everyone else losing and having actually beaten the other top contender head to head.

2008 and 2009 had little to no impact on LSU's title hopes as LSU had little to no shot of winning the title with the teams they did field. Though 2009 is an odd case as LSU was one of only three teams in the SEC to post a winning conference record, and LSU had to play Florida and Georgia (and Vandy, to be fair) cross-divisionally. Schedule also didn't really come into play in 2010, as LSU would have won the West had it just beaten Auburn.

In 2011, LSU played 3 of the top 5 teams in the country, beating all of them. LSU beat two other ACQ conference champions, both away from Tiger Stadium. Meanwhile, Alabama beat three teams with a winning record prior to the bowl season. Bama's second best win was likely Auburn, which was LSU's sixth best win. LSU beat Alabama head to head, had to play an extra game in Atlanta, yet Bama was actually rewarded for losing and got a rematch. It's not the fact that there was a rematch that was so galling, it was that Alabama didn't play a very tough schedule to earn that rematch. It was as if Bama got credit for LSU's brutal schedule.

But 2012 was even worse. That was the first time the SEC was decided by schedule. The top three contenders in the West all went 1-1 against one another and were 5-1 versus the division. The title was decided by schedule: the team with the easiest schedule was rewarded. There were three elite teams in the East that year, LSU played two of them and went 1-1, A&M played one and went 0-1, and Bama played none of them. Playing a much tougher schedule cost both LSU and A&M, and gave Alabama the divisional title.

2013 promised a similarly disproportionate schedule, but LSU made it a bit of a moot point by choking against Ole Miss. But the worst thing about the last two seasons is that the schedules have NOT been random. There has been no "luck of the draw". The SEC had to make bridge schedule due to expansion, so it made these schedules with the full knowledge of the relative strengths of the teams. And the league office gave Bama an easy schedule and LSU a tough one. That, above all else, is the source of LSU's frustrations. This was not just bad luck, this was a conscious decision.

Okay, for starters the 2011 argument is quite silly. You can't use your divisional schedule to prove the unfairness of your over-all schedule. LSU played Tennessee and Kentucky from the East that year (Bama got Florida and Vandy) but LSU scheduled, on their own mind you, Oregon and WVU..That's on them, not the SEC.

Forgetting the annual match-up with UF, LSU has played UGA three times since 2008 and USCe twice. But how quickly they forget that over that same time frame Alabama played UGA once, Florida twice and USCe twice.

Now, since 2008 Alabama has played Vandy and Kentucky more times than LSU, though not by that wide of a margin (LSU 3, Bama 4).

So, this really is about the permanent cross divisional rivals and not the natural scheduling rotation, huh..

The point ATVS made about the last two seasons being random, and not part of a designed mathematical equation, is quite damning, in my opinion. You have to wonder why the SEC gave Alabama such a lenient schedule in 2012 and 2013 while LSU was given UGA and USC yet again.

However, starting in 2014, Florida rotates in for Alabama and LSU picks up Kentucky. So, is that unfair for Alabama or from LSU's perspective, just sweet justice?

To give ourselves one last view point on the matter, here are the schedules for LSU, Florida, Georgia and Alabama since 2007. I included only these four teams because of their consistency since 2008. (Sorry, Auburn) I excluded the divisional games and only included cross divisional/ OOC games. My reasoning here is that you can't complain about a schedule with-in your own division, unless you want to realign the divisions, which I won't be debating today..

Only a true gump could deny Alabama has had the easier path of the four but UGA does comes in as a close 2nd. I truly believe this is the last year we'll hear about how unfair the SEC schedule is, at least from LSU fans. I'm sure Spurrier will pick up where Miles left off but the OBC is only here for entertainment purposes, right?

I do believe that the permanent cross divisional rivalries are a thing of the past and will be done away with when the SEC goes to a nine game conference schedule. That is unless Florida falls head first in the gutter and LSU sees no logical reason to take them off their permanent schedule..