Schedule was soft this week, my friends, and the meltdowns were rather sparse as well. Apparently there aren't enough passionate Miami fans on the interwebs (or maybe I didn't look in the right places) to produce a worthwhile submission, but we found some decent stuff from other folks. As always the language in the post below is horrible, vulgar, and offensive. If you are at work, in the presence of small children, or easily offended read no further. You have been warned.

This weeks edition focuses on Florida, Arkansas, and Tennessee. It never ceases to amaze me how some folks are slow to come to terms with what their teams are. News flash to the Gators, Vols, and Hogs among us: your teams suck this year. They are putrid. You should not pencil in an automatic "W" in any SEC game. The faster you accept this, the less material you will produce for this po... on second thought, I was wrong. All of you should be perennial national title contenders. Carry on. 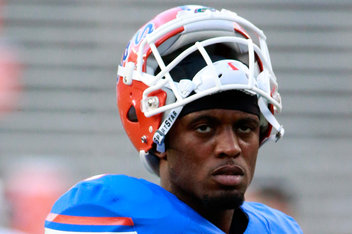 I'm not even angry anymore. I feel only a profound emptiness.

Alcohol not doing the trick. Switching to heroin.

Can we do a Longest Yard and just throw four straight passes at the ref's crotch? We'd score just as many points on the drive anyway.

My heart says: "Be optomistic." My brain says: "Don't go down that road again." My liver says: "Please stop, you're hurting me."

Did we just get beasted by a white RB? I quit at this game.

Things I don't want to hear about while watching the gators. Number one, how well Urban Meyer is doing.

I think it's a good time to try Heroin. Anyone else down?

Technically both teams still have a chance to make the SECCG and be obliterated by Alabama.

Hear that sound?
It's a bunch of decommits.

I just made a noise I haven't made since my first time having sex.

Someone just fuck my eyes out so I don't have to watch this shit anymore.

Coach Champ is great at coaching teams that commit suicide on the field.

Can't believe no horse collar call. Whose d1ck are they sucking?

Cut the cancer off. Start fresh. We gave the guy a chance, not to mention a few million $$. Now, he can go coach a lesser program and still make a good career.

This is getting uglier and uglier.
I'm about to climb aboard the "fire them all" wagon, but it has to slow down some so I can get up on the thing.

I note that many of you calling for CWM to be fired, or sent packing to Athens have minimal post counts. How about shutting the **** up until you have some cred?
For those of you with a larger post counts, are you Gators, or whining pussies?

Fuck it I'm getting white girl wasted second half

Down to a 4 possession game. Oh baby we're getting closer.

if we fire Pease
can we just cite 3rd down options to short side of the field and red zone wildcat and just say it was "for cause" and not pay the buyout?

Fuck me. Fuck me for hoping. Fuck me.

I have that sinking feeling of false hope dashed

Even though Muschamp only was in the NFL a short time
He has a bad case of NFL AIDS.

Danielson fucking on Murray's D even though they just ran the ball on that drive.

"...on what number? Oh, fuck it, on the entire Blue team for making me officiate this abortion of a football game."

So the most important game of the season is now against Vandy
Fuck you Muschamp.

Hire the Texas Tech coach. He's only down 21-0 in the first quarter.

"Ever Arkansas Razorbacks Quarterback should. Have. Life Alert."

This game is making me wanna put diesel in my car.

Is there an opportunity to score easy points?
If yes: Don't take them.
If no: Do some other stupid shit.

And watching Derby play is like shitting out full tortilla chips and habanero sauce.

FUCK GOD DAMN IT DERBY WE GO FROM A TOUCHDOWN TO ALLEN HURT TO A DERBY PICK AND A DERBY FUMBLE DERBY WHY DON"T YOU JUST GO THROW ON AN AUBURN JERSEY WHILE YOU ARE AT IT.

Yay! We are only down by three touchdowns! Yay!!!! Wps!

Bilema looks like a kid whose mad at a kid that stole his report card.
You fake injury? Malzhan is DIRTY!!!!!! DIRTY!!!!!!!

Fuck Gus! No class. Hides behind his religion.

Come on Gus fans, tell us how straight he is. Piss ant.

He's no Christian he is a cheating dirty coach

Thanks Auburn - on that last scoring drive you had, my 8 year old son had a mini-melt in front of my wife and I. He threw his hands to the couch and said "Fuck this, I'm done"
First time he's ever dropped the F bomb in front of me or the wife - thanks Auburn - and I had to pretend to be mad

fuck the talent on our team
seriously fuck em

I hope everyone of you Gus bus folks see the man in the cold light of day. How anyone of you can defend him after this is mind-boggling. This was the most blatant underhanded, chicken crap obvious lack of morals and class I have ever seen. I am disgusted and hope Auburn nothing but decay. 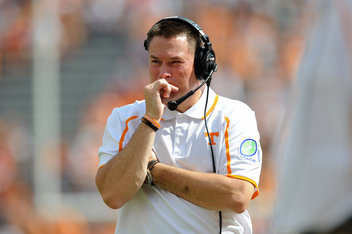 This is the Tennessee I know and hate.

If I had a shot for every catch-able ball Tennessee receivers have dropped in the last 4 years, I would have died of alcohol poisoning long ago.

Why the fuck can our defense not stop a single goddamned mobile QB? QB decides to scramble? Oh look, here's 15 FUCKING YARDS OF WIDE OPEN GRASS for you to merrily skip through. Oh, you're a slow pocket passer? Let's drop seven guys into coverage and allow one of the three receivers you send out to get so fucking open that he's got time to wave to the QB, have a picnic, sign an autograph and catch a touchdown before we get to him.

Yup, definitely gonna get angry/blackout drunk tonight. Almost out of alcohol though so gotta find someone to take me to the liquor store.
PSA: Don't drink and drive
EDIT: Got my cousin to drive me, I'm good!

I haven't said it yet today. Fuck ESPN. Let's laugh at a team because they're doing poorly. Fuck you.

Dear Josh Dobbs, I'm too drunk to calculate the statistical (im)probability of us coming back from a three score deficit...on the road...versus a top ten opponent, please help. Thanks. GBO

MATY MAUK SHOULD BE FAMOUS FOR STARRING IN DAWSON'S CREEK OR SOME OTHER WHITE ISSUES SHOW, AND WE'RE MAKING HIM LOOK LIKE ADRIAN PETERSON.

I'd take Baggett any day over any Tennessee DB in a "Don't Fuck Up" contest. If he's all you have to worry about, you're OK.

It's so bad but I just can't quit watching.

jesus fucking christ, got a first down? better get two false starts for a first and 20

aaaaaannnddd sad drinking begins
The uprights are stopping more points than our secondary.

I had chili tonight. 2 things are going wrong in my life right now, this game and the chili.

Another game where all of my friend's had plans so I'm home alone with my dog, watching the game, and getting Jager drunk. Let's do this! Go Vols!
Also, this may have been mentioned, but WHERE ARE JOSH DOBBS' EYEBROWS?!

"We will wear them down with the exact same things that weren't working in the first half! Keep it up!" - Derek Fucking Dooley and his glorious hair

Wtf do I choose to watch this crap over other things?

Oh no. We still suck!

Mizzou is raping us

that white boy has sucked all year

Here's to half time adjustments and another six duck rabbit milk stouts.

To add insult to injury, I lost a cap while eating a milk dud during the game. Now I have to go to the dentist.

This team should wear tutus all week

So who do we blame this blow out on? Coaches? WRs? O line? Defense? Offense? I mean my vote is to blame them all. I really thought we would see some improvement, but I,was wrong. Just another game that proves we need great recruiting and how bad Dooley actually screwed us.

Just dont think beer is gonna be enough .... liquor or no liquor?

If I were a big time recruit I wouldn't want to play for this train wreck of a program, so don't be surprised if you see them start to explore other options.

Got my George Dickel out. Gonna drink till I piss my Liver out

bought 4 old mattresses at a yard sale today just for the next special occasion. It's time !

When your punter is your best player then that ought to tell you something.

I continue to be amazed at the depth to which this program has sank.

Ugh. Thinking about taking up knitting on Saturdays.

I'm waiting for the posters that say we will finish any better than 5-7 to weigh in now. This game is shot. Next week will be worse. Vandy will beat us and BAM, there goes the ballyhooed bowl game.
We need serious infusion of talent on this team. WE SUCK!

Am I the only one that thinks this defense has gotten worse as the season has gone on?
We cant tackle a white backup QB when he scrambles.

Why are we putting a fist up?
Face south and bend over instead. Atleast they would be honest to themselves then.