In Part 2 of the defensive preview, we go through LSU's major contributors in the front 7, and dissect a couple plays to get a feel for how John Chavis likes to attack opposing offenses with his big bodies up front

LSU. Alabama. The two names synonymous with old school, in the trenches football. Part 2 of the LSU defensive preview will focus on the front 7. The big guys who will be responsible for stopping the Alabama rush attack and getting pressure on McCarron on pass plays. If you missed part 1 which covered the defensive backfield, you can find it here.

Mentioned in part 1 was how LSU relies on its standout talent to make plays in the defensive backfield. This is very true up front as well. And unlike the back four, the front seven have experience in the system to lean on. There are no true freshman, although most are still first year starters stepping up after the losses of Kevin Minter, Sam Montgomery, Bennie Logan, and KeKe Mingo. In fact, the only true starter returning this year from last is Will LB Lamin Barrow (18), although with the rotation up front similar to Alabama’s, Ego Ferguson (9) and Anthony Johnson (90) saw plenty of field time last season. 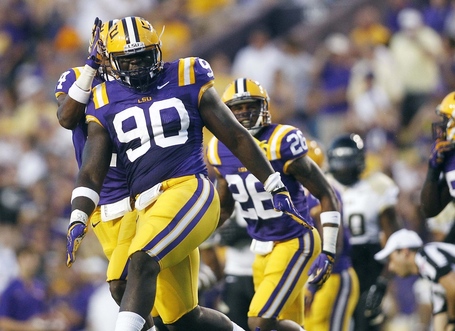 We will start there, at the tackle position, manned primarily by those two, Ferguson and Johnson. The Defensive Tackle position has a proud history on the Bayou, with NFL starters Michael Brockers and Bennie Logan being the latest to make an impact in the pros, but this current tandem has a chance to be the best tackle combo to come out of Baton Rouge in recent memory. Anthony Johnson (90), sophomore from New Orleans, was a pre-season all American selection at 6-3 294. Johnson is not your average DT. While he came in to LSU in 2011 at 40 lbs heavier, at a svelte 294 Johnson has been clocked at 4.7 in the 40, certainly a number not often associated with a tackle. Through 9 games this season, Johnson has 6.5 tackles for loss, 3 sacks, and 27 total tackles.

While the strategy early in the season was to double Johnson, LSU’s opponents might not have that option anymore with the emergence of Ego Ferguson (9) next door. The first year starting Junior, at 6-3 309, has come on strong and is giving offensive lines fits, especially if they choose to focus on Johnson. Ferguson has 3.5 TFLs including a sack so far this year, along with 42 total tackles. 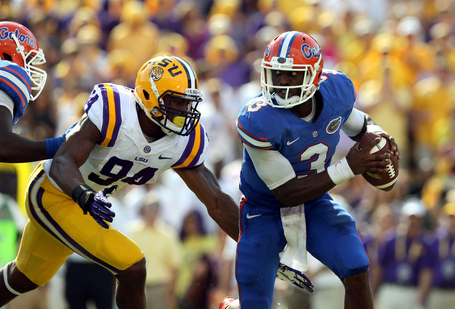 As good as the two tackles have been, the guy to focus on in the front 7 is at DE. Number 94 Danielle Hunter (pronounced Da-Kneel, not Dan-yell), a 6-6 241 lb sophomore from Katy, TX. Hunter started slow this season, his first as a starter, but since the Florida game, in which he was named SEC defensive lineman of the week, he has really turned it on. With the big shoes of KeKe Mingo to fill, Hunter is beginning to remind Tiger fans of old number 49, with great length and tremendous speed from the end position.

On the other side is junior Jermauria Rasco (59). The 6-3 262 end from Shreveport is a solid playmaker and sure tackler who has 39 tackles on the season, including 2 sacks and 4 TFLs. Again, a first year starter who played behind Sam Montgomery last year, Rasco has played well but thus far has not lived up to the admittedly giant expectations left by Montgomery. But LSU fans are probably better off with Rasco than Montgomery anyway, factoring in the departed DEs well documented issues on and off the field.

Another DE you should know going in to this game is Junior Jordan Allen (98), who rotates in quite a bit. If you see a guy who looks like Clay Matthews running around in a white shirt, that would be Allen. 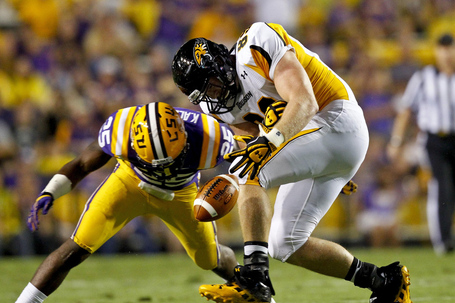 Moving back to Linebacker, LSU has three solid if not unspectacular players getting most snaps. Though LSU is deep at the position, they have probably not had the season that many Tiger fans expected of this group in the summer. That said, Kwon Alexander, a name some Bama fans are familiar with from recruitment, has really taken charge of this bunch. Alexander (25), a true sophomore from Oxford, AL, has 52 tackles and 6.5 TFLs so far this season. The 6-2 218 Strong side backer has been a terror in run support, and does extremely well when in coverage as well, because of his safety-esque frame.

The most experienced award of the entire front seven goes to senior Will (weak side linebacker) Lamin Barrow (18). As mentioned above, Barrow 6-2 232, is the lone returning starter from a year ago. Though he has the reps, and wears the no. 18 jersey indicative of a captain and leader of the team, Lamin has not had the break-out year that many expected. That’s not to say he hasn’t been productive, leading the team with 64 tackles, but the second coming of Kevin Minter, which LSU fans were hoping for, he is not.

At Mike is Junior D.J. Welter (31). Very much like Barrow, Welter has played well, accumulating 50 tackles, but really doesn’t jump off the film. It seems that most LSU fans are pushing for talented sophomore Lamar Louis (23), who will spell Welter, to overtake the starting position. Another LB to look out for is senior Tahj Jones (58), originally a starter over Kwon Alexander at Sam. After injuring a hamstring in the Auburn game, Jones has missed the last 5 games, but Les Miles hinted that he could play on Saturday. 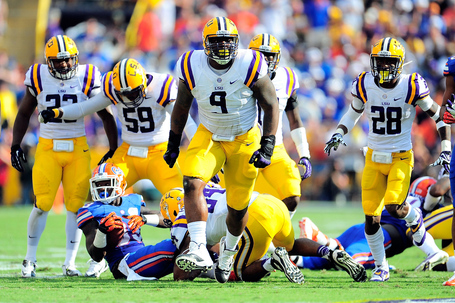 The Rebel Black Bears had success against this defense by running their smallish backs out wide and making quick reads and throws when passing, generally avoiding the strength of the up the middle run defense and pass rush. I expect that Alabama will not follow this lead, but instead follow the template that Georgia offered. A more straightforward approach of attacking the defense up the middle with power backs, and leaning on the O-Line to create time for the receivers to get open against the young secondary. A strategy that can have success, as Georgia showed. But simply stated: you must have the personnel on offense to do this. Georgia did when they played LSU, before a handful of injuries derailed the season, and Alabama does at this point as well.

Because of this, we will look at a couple plays from the Georgia game. Even though the LSU defense has transformed a bit from then to now, the plays and personnel that Georgia brought more closely resemble what Alabama will show. 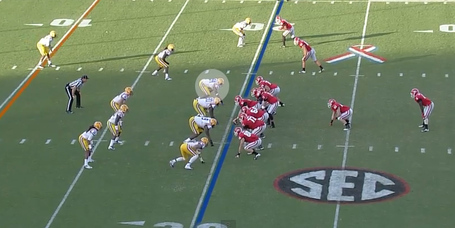 In this first frame, we will focus on DE Danielle Hunter (94), circled. LSU is in the standard 3-4, shifted to the strong side. Georgia lines up in I-formation with a TE left, showing run left. We will see that they, like Alabama, often run exactly what was expected out of the formation, including on this play. 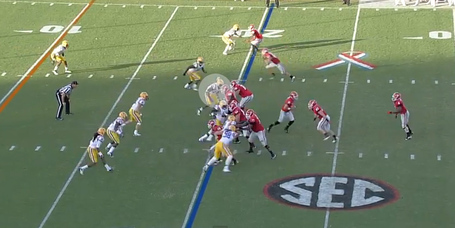 In frame 2 you can see the play developing, the line is doing a good job getting on their blocks, and it looks like Hunter (highlighted) will be effectively out of this play, because the right tackle has good leverage, and the run is off tackle left. 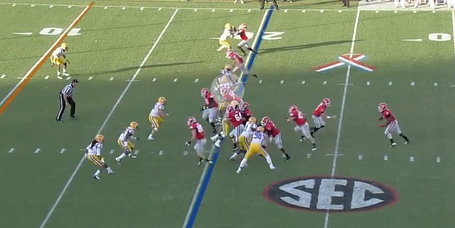 Here Danielle makes a great spin move, freeing himself of the block of RT Kolton Houston. 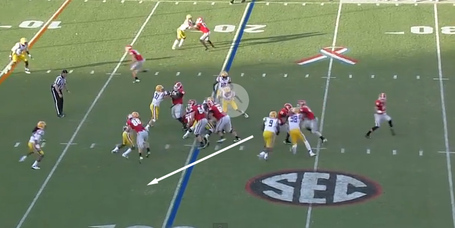 The left side of the line has this play blocked expertly. Ego Ferguson (9) and Jordan Allen (98) have come upfield too far, and that has left a giant hole for Keith Marshall, UGAs RB, to find. The last chance for a stop is Hunter, again highlighted, who is racing towards the hole to meet Marshall. 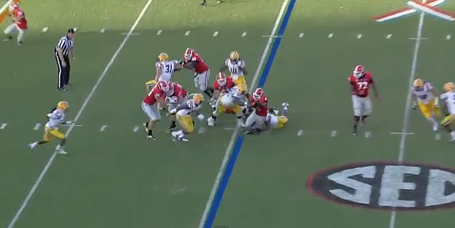 The speed of Hunter is too much for Marshall, as Danielle dives and catches Marshall’s legs just as he was bouncing outside. If not for Hunter’s excellent job quickly getting off the block, this play goes for at least 5. 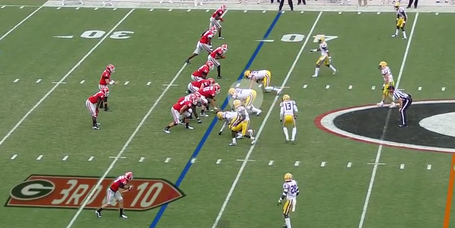 The next play was from earlier in the game. Georgia is in 3rd and 10 and looking to get a nice gain to sustain the drive. LSU comes out in a dime look, with 3 down lineman and 2 linebackers. The highlighted player is Anthony Johnson (90), on this play lining up directly over center. 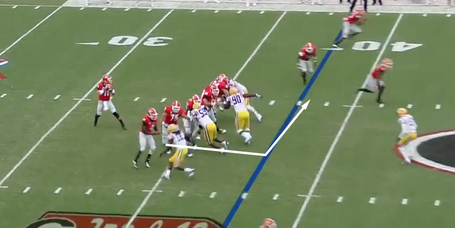 Obviously in a 3rd and long situation, LSU is expecting pass, so they drop 8 in coverage, and just rush the front three. In this frame you can see this developing. The one exception is LB Lamin Barrow (18), who is responsible for Marshall out of the backfield. Here you can see Marshall looking to set up for pass protection, so Barrow assumes he is free to rush also. 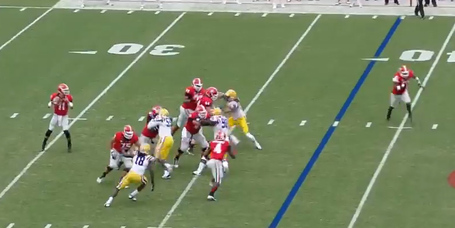 But Marshall actually is setting Barrow up and runs a short crossing route expecting a dump off. Barrow recognizes this, but as you can see, he is extremely late. Marshall looks like he is free to get the ball in open space on the top of the screen. Also note the receiver on the right side of the image is setting up a block, so the play was designed to go to Marshall there. 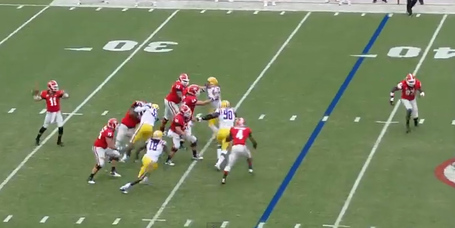 The one thing Georgia wasn’t expecting was for Anthony Johnson to recognize this play also. Here you can see Johnson (90), after reading Murray’s eyes, disengages the center and, feeling Marshall coming behind him, reacts to cover him. 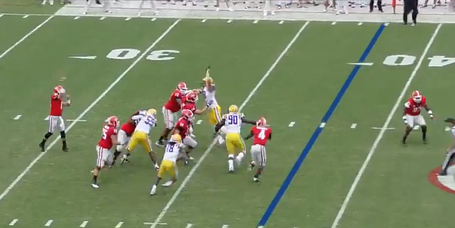 Murray had already committed and throws the ball there anyway. Johnson makes the interception and LSU’s defense has seriously swung the momentum of the game. A great read and great instincts by Johnson.

Expect another battle up front between the Alabama O-Line and LSU’s front 7, just like years past. The names have changed, but the talent remains. All analysis shows that there are ways to exploit this defense, and Georgia certainly gave out the blueprint, but to expect Alabama to easily burst for big gains is laughable. We all know that the Bayou Bengals circle this game as if it’s their season now. We saw this in the play of Mettenberger last year, playing beyond his film. I would not be surprised to see a similar showing this year, from Mett and/or some of these new guys on defense. Alabama will need to play fundamental football on offense: play well on third downs, protect the football, and frustrate the youngsters in LSU’s backfield, and the game’s outcome should follow.