Share All sharing options for: The Jumbo Package │11.07.13

I can't stop you from going over there and reading but I can ask that you avoid trolling. No matter how condescending they can be (and my lord they wrote the book) and how incredibly butthurt they are about Alabama. (sorry LSU fans but reading those comments..wow) we should always aim to take the high road.

Food for thought- Never get in a pissing match with a Tiger who can't spell 'no' 'go' 'yo' 'ho and a bottle of rum' correctly.

The film crew also followed the team during the famously intense Fourth Quarter Program. After running the Bryant-Denny Stadium stairs 10 times, cameras cut to nauseous players riding on a bus back to the football complex. "Did you have cereal this morning," Cochran yelled. "Let it out! Let it out!" Alabama players have plenty of stories to tell about their memories with Cochran's workouts.

Linebacker C.J. Mosley recalled running 16, 110-yard sprints on his first day. "And I felt like I wanted to quit," Mosley said. "Some players were giving up. Some players were throwing up. I made my way through it, but it was probably the longest practice I ever had. My freshman year, the most we did as a team was 32. No shade. All sun. 100-degree weather. It's all about a mindset at Alabama. You either buy into the program or you don't."

I can't wait till this entire segment is on YouTube. If anyone has a link to it please throw it in the comments below.

LSU’s offense starts with a big, strong offensive line that has helped the team rush for 201 yards a game. Jeremy Hill is the featured back. He’s second in the SEC in rushing with 115 yards a game and has 12 touchdowns.

We've been talking a lot about the possible mismatch of LSU WR's against our corners but we can't forget about the LSU running game. Jeremy Hill shouldn't be playing football right now but he is and he's really, really good.

My personal opinion is that LSU will come out throwing the ball to set up the run and if they have success doing so, it'll be a long night for the Bama D.

This weekend, Alabama and LSU will play for the first time in Tuscaloosa since 2011. Despite a steady march down in price, the game is still the most expensive game of the week.  Since peaking in January at an average price of $683, prices for the game have dropped down to an average of $265.

I love Alabama football just as much as anyone but I refuse to pay that much money for a single ticket. It boggles the mind the amount of money people spend on a regular season game, let alone a SEC Championship or National Championship game. To each his own I guess...

And after Ball State scored to take a 13-0 lead over Central Michigan, ESPN2 cameras found a fan with a familiar rallying cry. "WE WANT BAMA," it read. 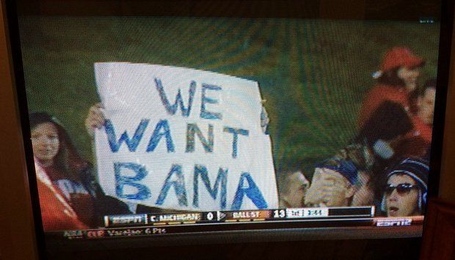 FSU fans nod in agreement and don't think the sign is silly at all.

Against a two-headed receiving threat like the one LSU possesses, that cornerback spot will be heavily watched. Jarvis Landry and Odell Beckham Jr. are capable of doing to the Crimson Tide defense what Texas A&M receiver Mike Evans did. Namely, carve the secondary to shreds.

This is my nightmare...

INSIDER REPORT: How Alabama, LSU feel about each other | TuscaloosaNews.com

"As far as the football field, I think there’s a lot of respect. I don’t know about the fans’ perspective," UA senior linebacker C.J. Mosley said. "Even if it does get chippy, Alabama is not that way. I try and do a great job with the our defense when offensive guys get chippy with us. I try and make sure guys keep their head, and still play the next play. If you’re going to be a football player, things are going to get emotional in a game and guys are going to do what they have to do, but at the end of the day, that’s not how we see ourselves at Alabama."

While LSU is talking about match-up advantages and how much they hate us, 'Bama players are talking respect and keeping emotions at bay...Just a different approach to the game and the media.

Alabama's Landon Collins says he views LSU game like any other: 'Another opportunity to be great' | AL.com

Now a sophomore starter in Alabama's secondary, Collins admitted Tuesday that he still hears about how he committed to the Crimson Tide "all of the time" but expects support from his friends and family Saturday. "I don’t think that will ever stop," he said. "They’re cheering me on. Some of them say, 'Even though it’s the home state and I got LSU on, I still got 26 in my heart.' That’s all they say."