Your daily dose of Crimson Tide news and notes.

On a second-down handoff late in Alabama’s comeback win over LSU last season, Hill bounced an off-tackle play outside instead of hitting a rapidly closing hole.

He was dropped for a 3-yard loss. The Tigers failed to convert on third down the next play. Then kicker Drew Alleman missed a 45-yard field goal.

The Tide followed seconds later with a game-winning touchdown, clinching a 21-17 victory.

"When nothing is there, I was trying to bounce it to the outside and make a play happen when I should have just stuck it in there and got those 2 or 3 yards," Hill said

Despite all the pub that LSU's star receivers have garnered (well deserved, though it is), Hill may prove to be the lynch pin for LSU this week.  If Alabama has to devote an extra player to keep Hill contained, the Tide may have a long day.  Alternately, if Bama can hold Hill to only moderate success with only seven guys in the box, LSU may find passing to be a difficult proposition.

If you followed Collins' recruitment, you probably know Victoria's face, whether you realize it or not. She's the beautiful young woman pictured alongside Collins in any number of images on the Internet, usually with some kind of hateful or derisive message attached. All because she was his girlfriend. All because she was set to attend Alabama.

"The only reason him and I even started dating was because we knew we were going to be at Alabama together. Many people don't know that.

"He asked me to be his girlfriend and everything, and I said yes, but I didn't know where he was going. He told me it was down to LSU and Alabama, and I told him I didn't want to develop more feelings for him if we were going to be at two different schools. ... He was like, I wouldn't be dating you if I was going to LSU. And that put a big smile across my face."

This piece has some amazing insight about the Landon Collins recruitment/commitment story that is only now coming to light.  Unfortunately, I'm afraid that stories like these happen far more often than we'd like to think.  It's disgusting how some strangers could treat a young person over a game.  It's also unfortunate to hear that Collins' mother has not really warmed to his decision, even two years later.  I hate it for the young man.  I'm sure it's a heavy burden to have a parent so openly oppose the path you're on.  Apparently, Landon has a younger brother that isn't even considering Alabama at this point, and I don't think we should be surprised at all if Bama fails to land a second Collins in the coming years. 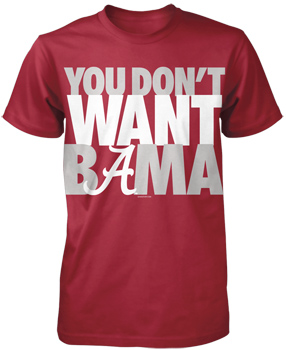 So... About those shirts Oregon printed up...

The pain from his toe and foot hurt on the outside, but it burned even more on the inside.

"It's real frustrating not being able to play to your fullest potential," Cooper said, "when you know you can go out there and dominate."

A healthy Amari Cooper is a scary thing.  Watch out now, LSU.