There will be no Ducks dynasty this year. 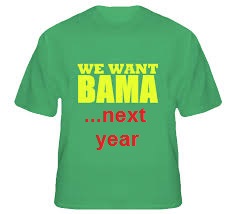 Could this be a case of counting your ducks before they hatch? After a win over Washington a few weeks ago, some enterprising Oregon students started selling "We Want Bama" T-shirts. In retrospect, they probably should've been more concerned with Stanford.

For the second straight season, the Cardinal handed the Ducks their first loss of the season - possibly eliminating them from the BCS National Championship Game as well.

Stanford absolutely dominated the Ducks for three quarters to the tune of 23-0. Oregon had less than 200 total yards at that point. The Quack Attack made a game of it late but it wasn't as close as the final score indicated.

Cardinal running back Tyler Gaffney carried the ball a school record 45 times for 157 yards. Quarterback Kevin Hogan and the Stanford offense simply lined up and ran the ball down the Ducks' throats. They finished with 26 first downs to Oregon's 17 and were 14 of 21 in 3rd down efficiency.

What do you think of Oregon, Kristi?

Early in this game, the Sooners dictated action playing some tough defense, stifling Baylor and limiting them to a field goal in their first five possessions. However, uncreative play-calling and lackadaisical Oklahoma blocking kept the Sooners out of the end zone which allowed Baylor to stay close and adjust.

OU finished with 87 yards rushing for the game.

Bears quarterback Bryce Petty did not have the greatest performance but protected the ball and was pretty good at handing off to running back Shock Linwood who galloped for 182 yards on 23 carries.

This is only the second time Oklahoma has lost to Baylor in 22 meetings but it is the second loss in the last 3 years. You may recall the first time Boomer Sooner went down to the Green and Gold in 2011.

In Tallahassee, the FSU fans have got to be celebrating. It should be interesting to see if the Seminoles can focus their attention to Wake Forest on Saturday. The Demon Deacons are 4-5 coming off a 13-0 loss to Syracuse.

The ACC Championship game is December 7.